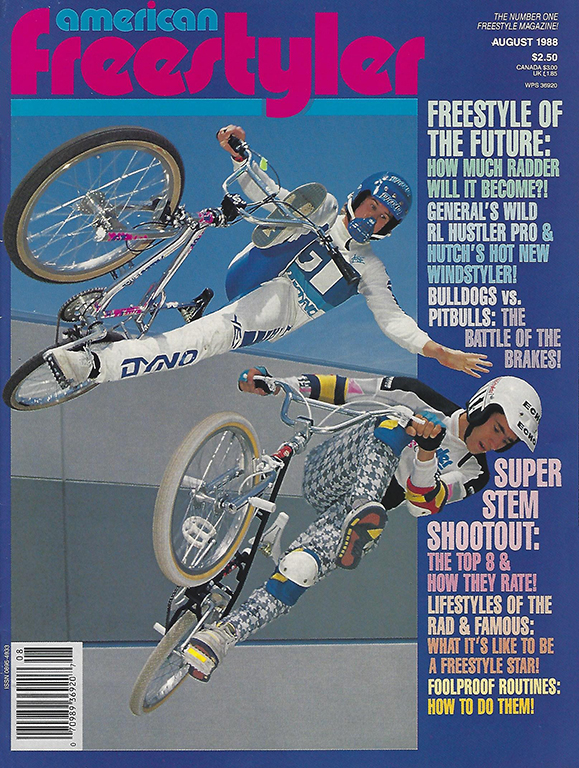 Thirty years ago this month . . . American Freestyler (formerly Freestyle Spectacular) was a short-lived Daisy/Hi-Torque Publication.  This was the same publishing company owned by Roland Hinz – who also published BMX Plus! (along with other magazines with titles like:  RC Car Racing,  ATV Action!, and Dirt Wheels).  It’s assumed that Daisy/Hi-Torque printed American Freestyler in 1987 as an attempt to capitalize on the freestyle boom of the late 80s.  Since they were already covering similar content in BMX Plus!, American Freestyler simply removed the racing– likely a way of marketing twice as many advertisements to already over-extended BMX brands, as well as selling a few more magazines to hardcore freestylers.

American Freestyler was only on newsstands for two short years before it folded in October 1988 (along with Super-BMX, Club Homeboy, and a few other publications), citing the nationwide dip in the popularity of freestyle.  (I’ve been told by numerous parties within the establishment that 1987 still stands as the high water mark for BMX/Freestyle complete bike sales.)

The late 80s were a hinge as 80s freestyle branched into 90s street, ramp, dirt, & flatland. At that time I was a wide-eyed late-comer to the party, building my first bike and making crude ramps just as the North American youth bicycle industry and national BMX media entered an economic downturn.   This is one of the few magazines I owned along with a BMX Action and one Freestylin’.

Sure, looking back now some of the ads and content seem strange and corny.  American Freestyler wasn’t the same type of magazine as BMX Action or Freestylin’ in the quality department.  Still, in comparison to today’s insta-standards of blasting pointless media at you with pressure and accuracy of a flailing, unmanned fire hose, a few of American Freestyler’s articles were intelligent, keen, and focused.  For a magazine created for adolescent males, John Ker, Karl Rothe, Mike Collins, Mike Carruth and co. did a pretty admirable job under the circumstances.  The editors had confidence in the literacy and comprehension of their readers that seems lost in our modern world.  I often wonder if any of the smart-phone addled and social media immersed population of today possess the attention span to read a 5 page article, interview, or contest report?  Regardless, this particular magazine hit the stands 30 years ago this month, and I thought it might be fun to take a quick look back at a few of the pages inside. 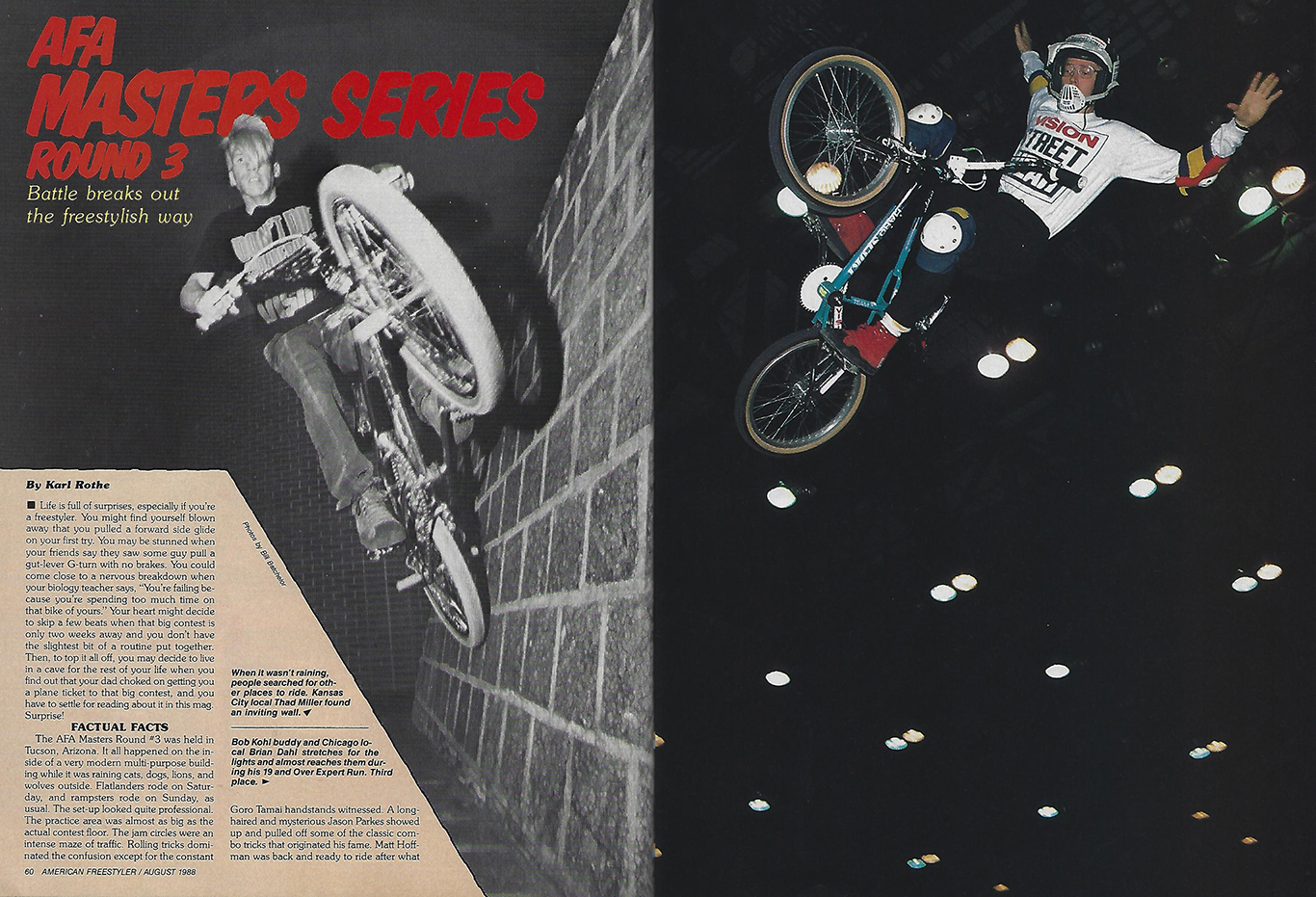 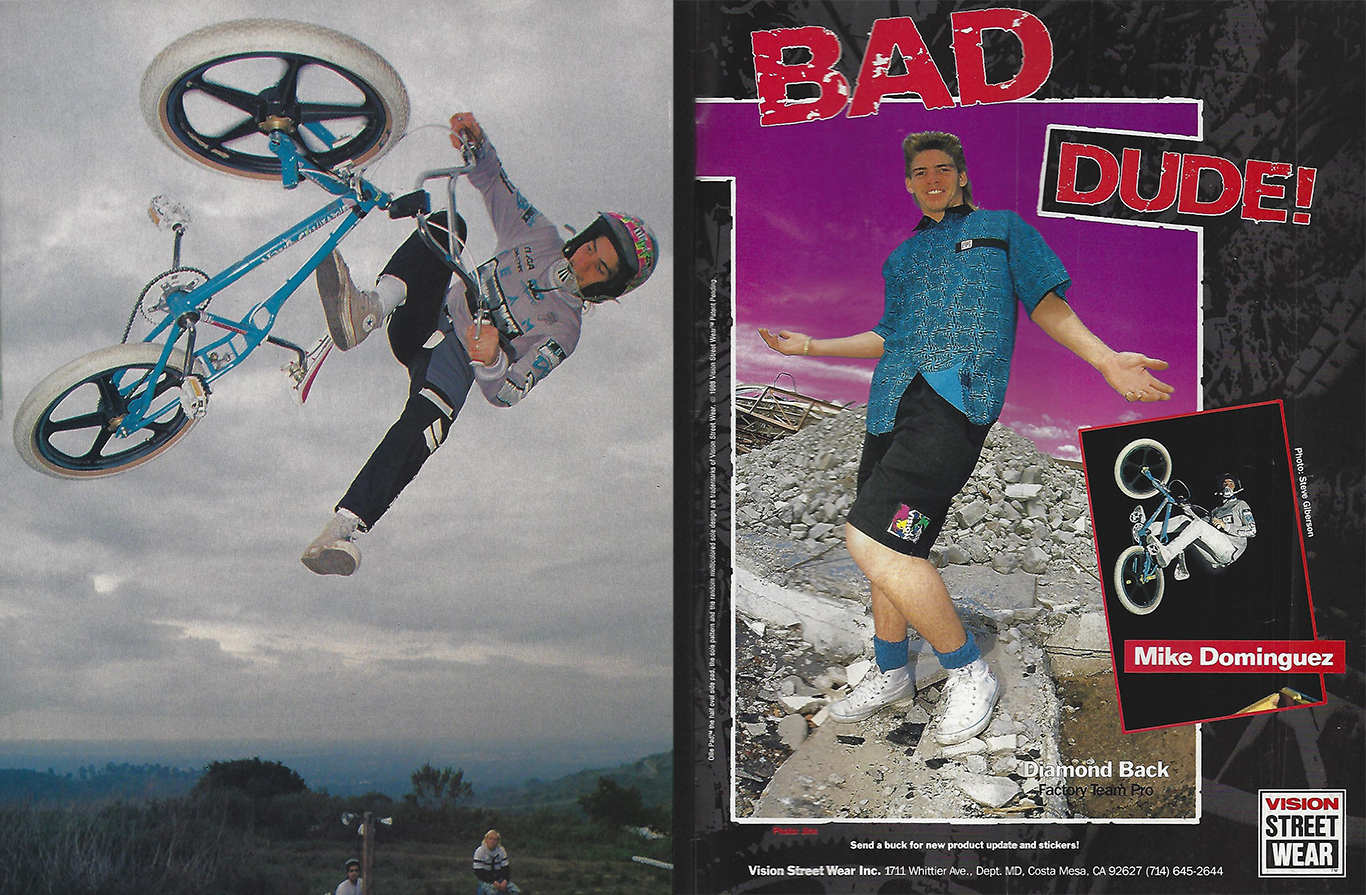 Although he was wearing Converse shoes in the previous 3 page interview, Vision Street Wear still ran an ad to remind us all that Mike D. was indeed a Bad Dude!  Did you or any of your friends ever have a “Dominguez haircut?” 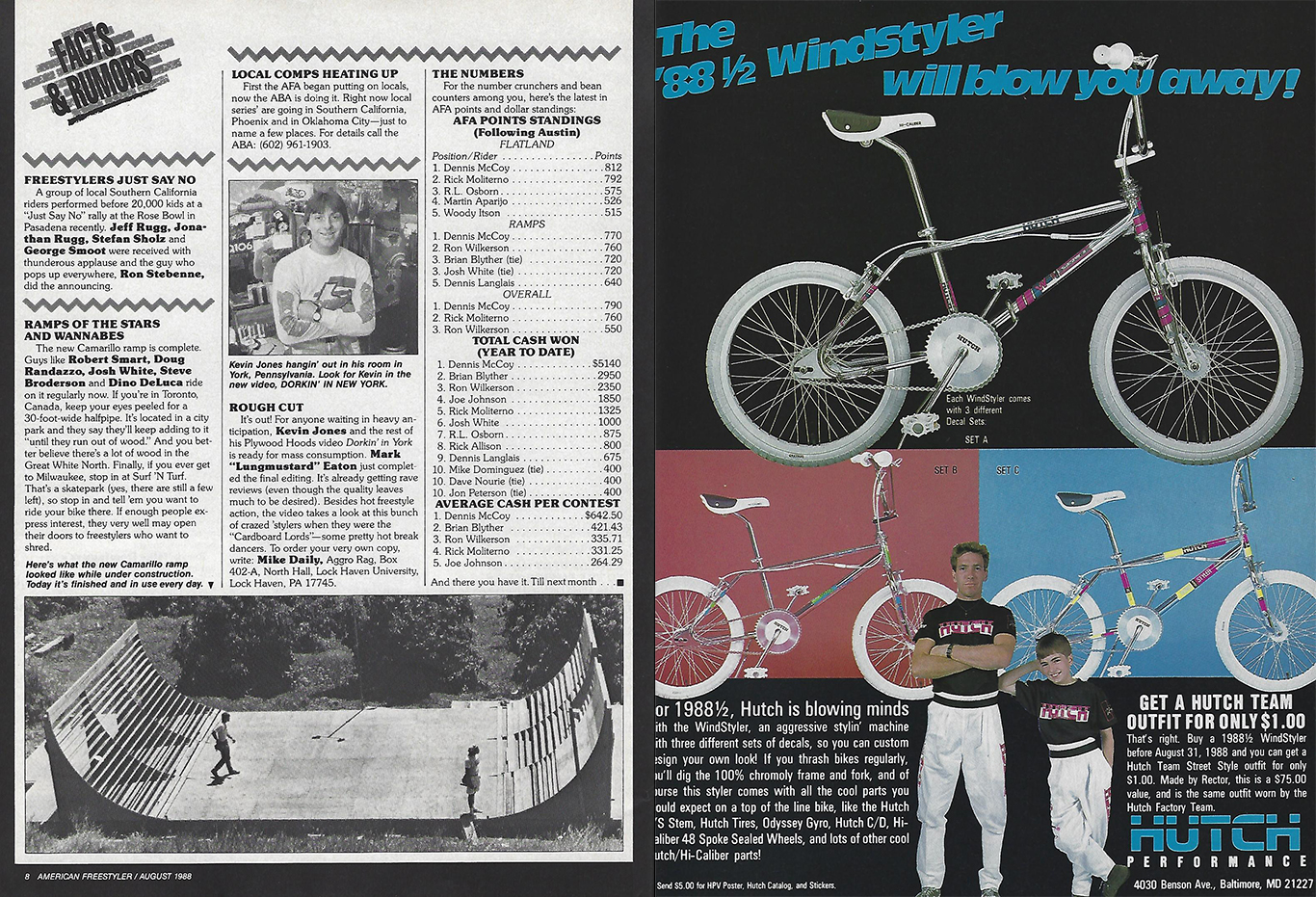 Left:  Ribs on the Camarillo ramp, a new video called “Dorkin in York,” & cash amounts won by the pros so far in ’88.
Right: This Hutch ad with Rick Allison and Greg Macomber was weird then, and it still is now. 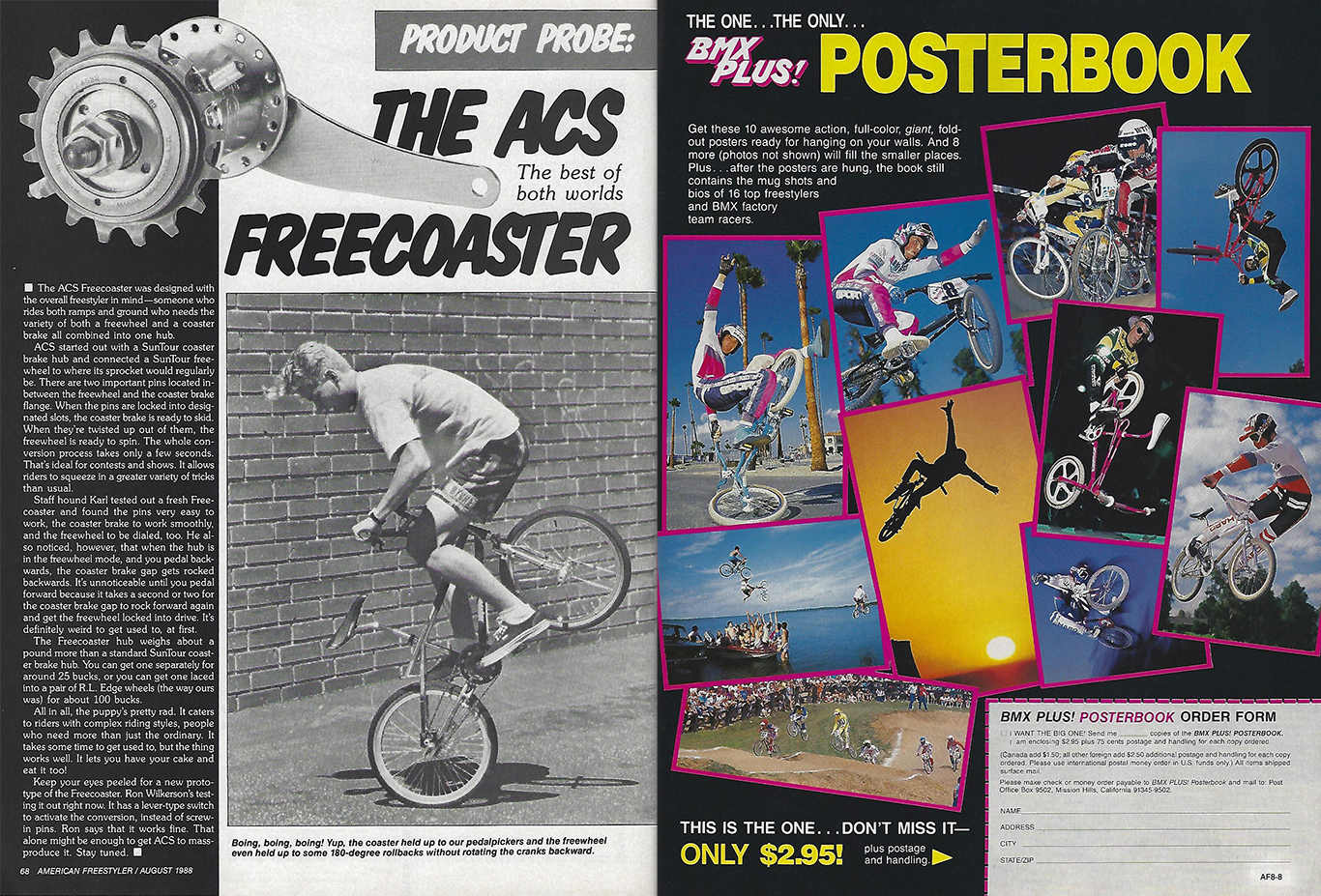 Left:  The ACS freecoaster looks a little different than today’s models, but talk about being ahead of the trends!
Right:  Name all the riders in this posterbook ad and win a free 1 hour yoga session with Shad’s dog, Dr. ChooChoo Train! (Note:  He’s not a real doctor.) 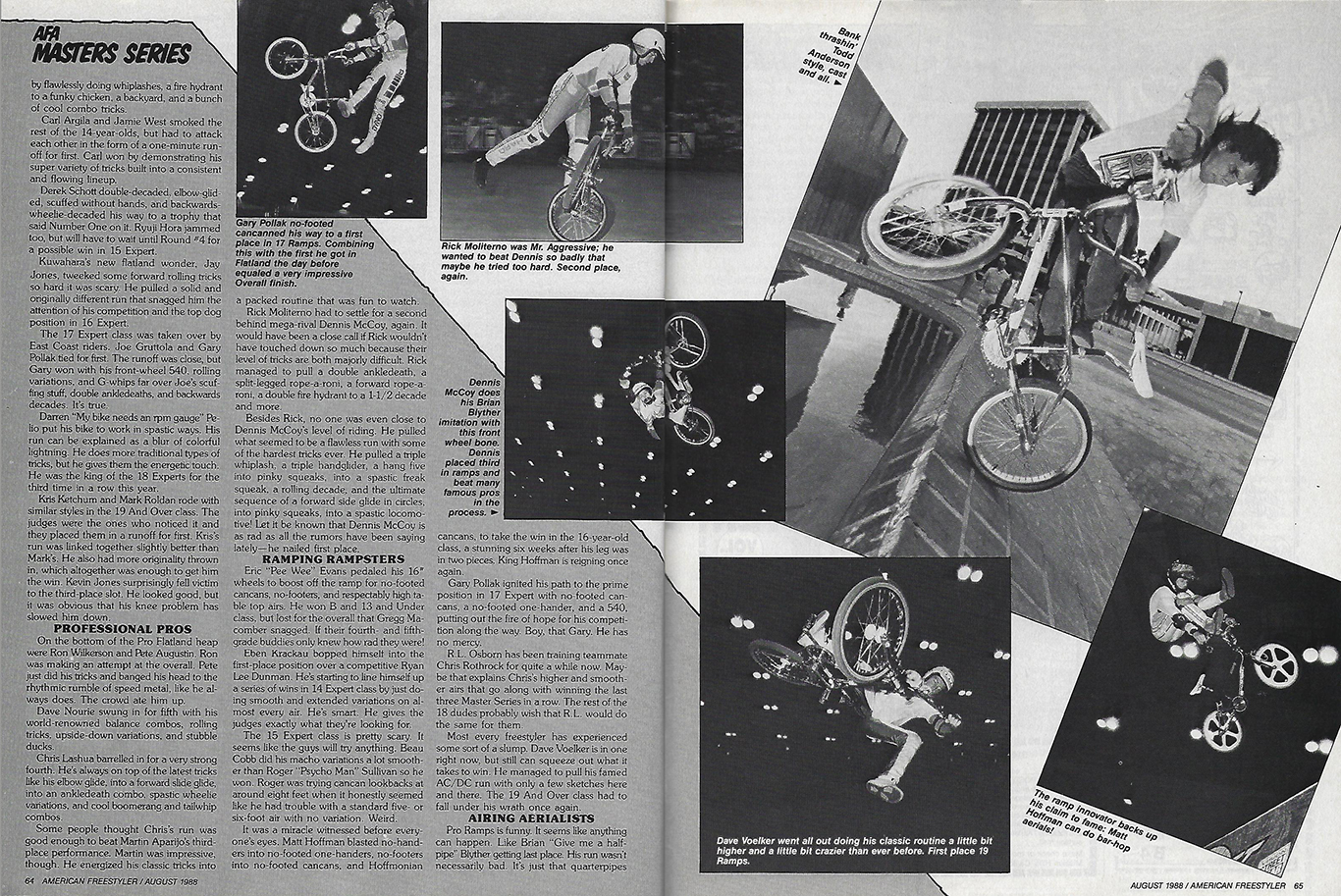 The 2nd street riding photo in the mag comes courtesy of Todd Anderson at the fountain banks outside the AFA contest in Tuscon.  Smaller photos from Gary Pollak, Moliterno, DMC, Voelker, and Hoffman. 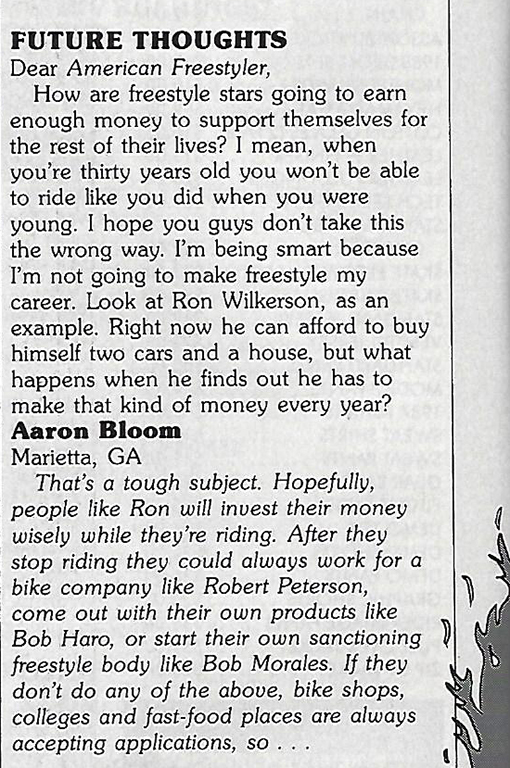 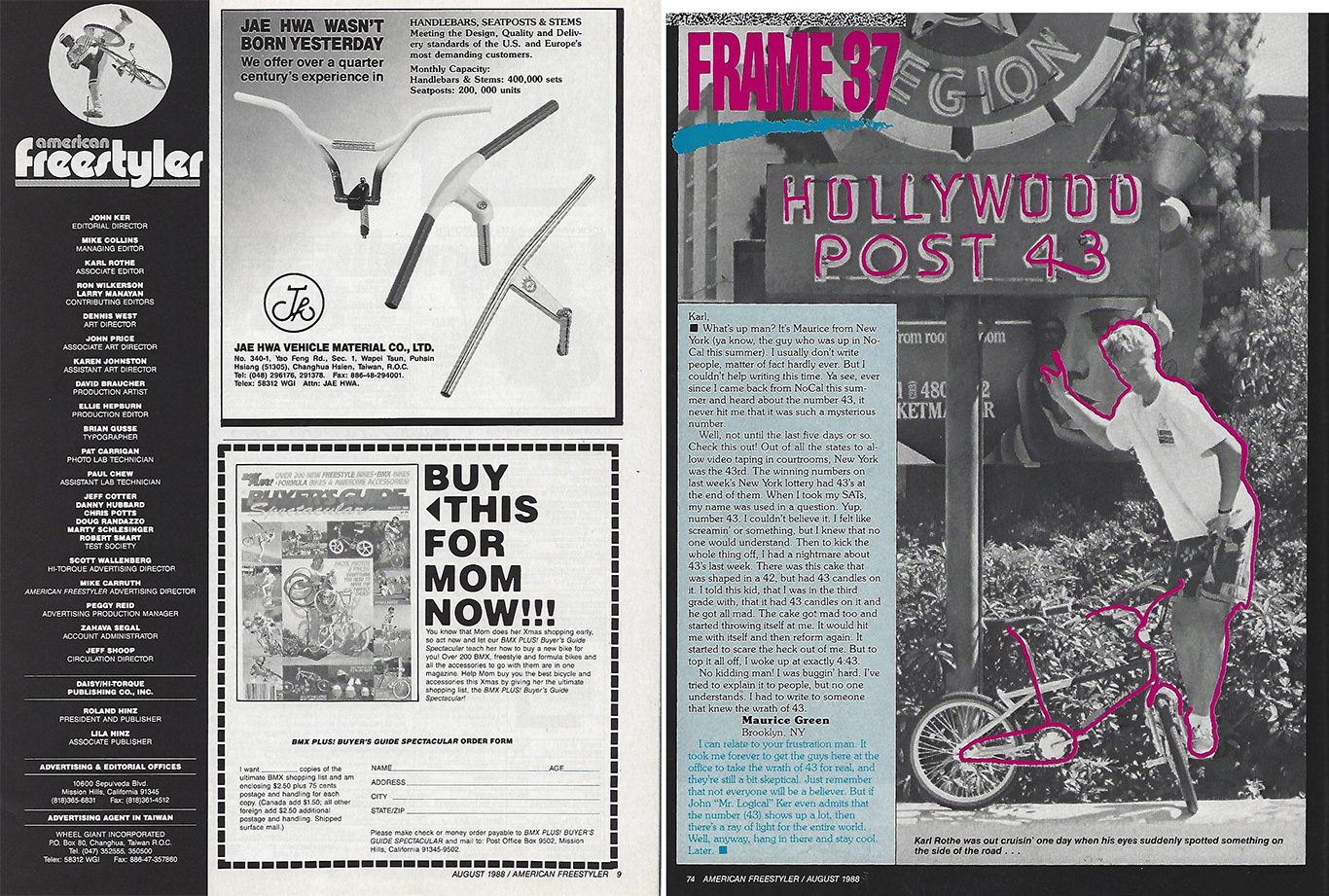 Left:  The masthead.
Right:  Last page with the origins of 43. 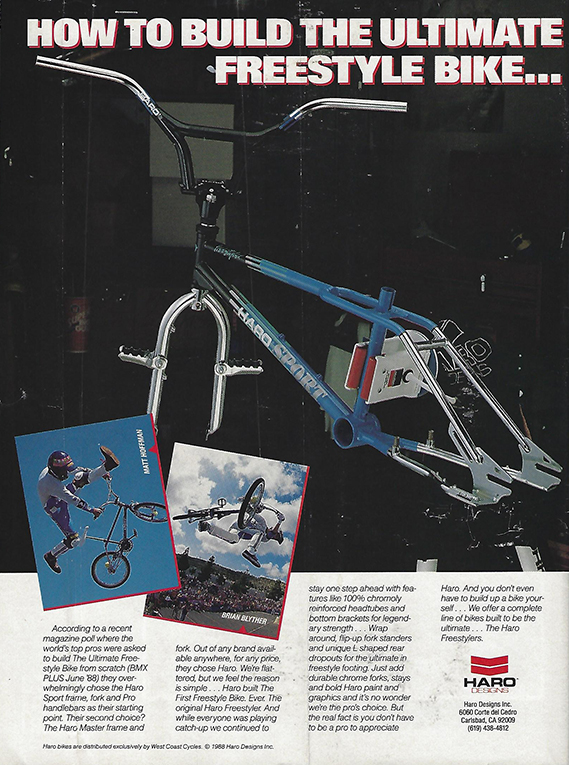 The back cover, and still my all time favorite Haro ad.  Who else out there wanted this kit?  Who had it?

If you looked through this, I’d really love to hear your thoughts below in the comments or on our social media for this topic. Thanks in advance!
//PC