This is not an in-depth interview with Nick Ferreira.  If you want to know more about Nick’s background, there are several excellent interviews with him online already.  My favorite ones are here, here, and here.  Today I wanted to briefly talk with Nick about his latest endeavor – Challenger BMX Magazine.

For those that don’t know, you’ve made a ton of BMX zines.  Can you list a few examples?
Namely Holeshot – as far as BMX publications go. I’ve also produced other books and zines that don’t have anything to do with BMX – but stuff like Basketball, DRI tattoos, and some that sort of relate to BMX, like Kona. Last year I made the zine, Schweppes too.

What prompted you to make Challenger BMX Magazine, and what can we expect from this endeavor?
Well, I had a great time making Schweppes; I’ve been riding a lot more these past few years and meeting more people.  It feels like being 17 again. I wasn’t actively chasing that; it just kind of happened. I’ve also been way more interested in pursuing design and really pushing myself to learn new stuff – whether that’s web stuff or seeking out different commercial printers and printing methods.  I’ve spent a lot of time over the last few years consuming a lot of information, and I finally felt ready to make something again . . . It’s a really modest publication. I’m calling it a magazine, but you can expect a newsletter with more magazine type content, (but, there won’t be news.) It’s going to be one sheet of 22″ x 17″ paper, folding down a few times. It’s basically equivalent to the amount of content in a 16 page 8.5″ x 5.5″ zine. It’s a fun format to work with design-wise.  It’s not going to fill any void of there not being any major US magazines – just a taste. It’ll be printed quarterly in 2017. 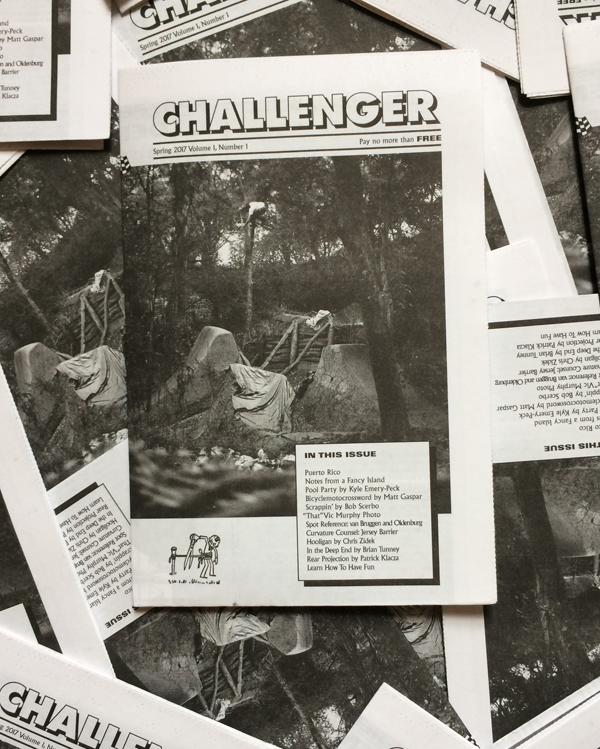 Challenger #1 // Hot off the Presses

That’s a great line-up!  How can we get a hold of a copy?
They’ll be mailed out to shops and available for free. I’m not up on every shop out there so, if you’re a shop and want to have Challenger available – hit me up, and we’ll make it happen! Other than that, you can subscribe or steal a friend’s copy that subscribed. I’m not going to do direct one-issue sales. That’s too much to keep track of. But I’ll be taking subscriptions for the whole year- they’ll be retro-active going back to issue #1 while supplies last.

Care to plug any of the advertisers?
Yeah!  Huge shout out to: Cult, Empire, Circuit, Relic, The Central Library, Joe Doherty, Seattle BMX, Let’s Roast, Dick Maul’s, and Never Learning Tricks. Their support means a lot to me and helps cover the cost of printing and distributing. I really appreciate it, because it’s not a typical advertisement- more like a sponsor. The back of the paper looks like a Little League Baseball t-shirt with local sponsors all over it.

Perfect!  What’s your affiliation with East Coast riding crew, ALYK?  Can give us a preview of your tape project with them?
I’m not affiliated with them at all; I’m just into their stuff. I met Damian Racut (one of the Act Like You Know dudes) one night when he was riding in Chicago with Scott Marceau and their homie Vic.  Damian and I spoke right when I was starting to work on Challenger, and ALYK came up. I always liked their designs and also appreciated the musical references.  Issue #2 of Challenger will have a ALYK feature of sorts with riding photos, and each dude picked a song that will be recorded onto a limited-run cassette tape. This is the type of stuff I’m really excited about with Challenger. 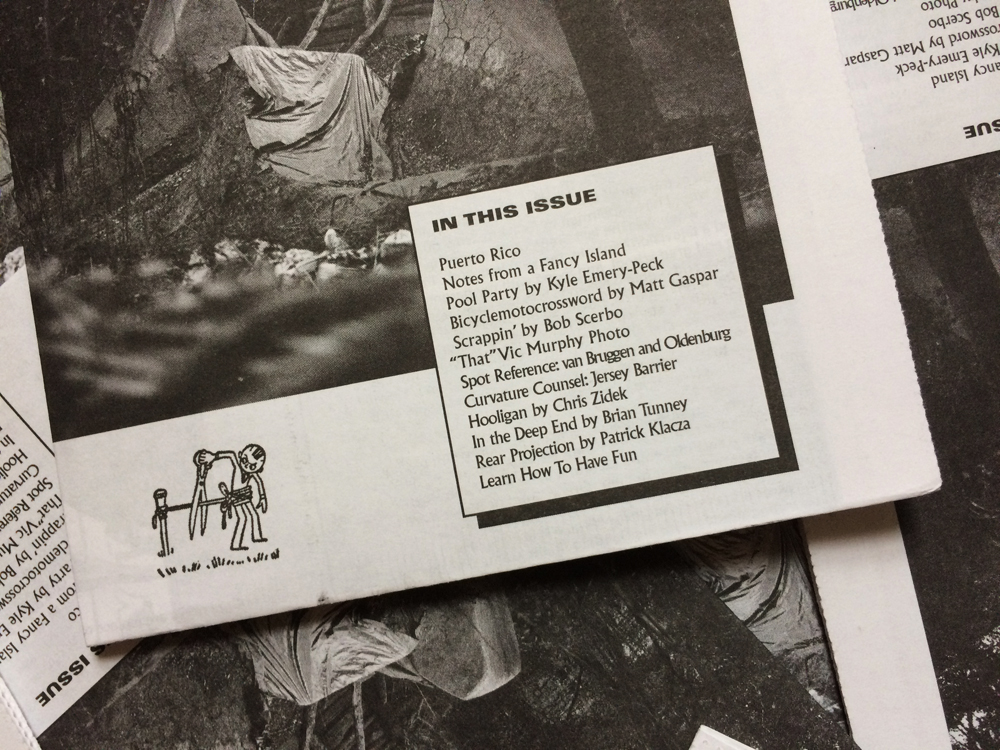 Cool.  What media – podcasts, magazines, zines, or books (BMX or otherwise) are you into lately?
I subscribe to The New Yorker and try to listen to Democracy Now!’s daily show. Other than that I just pick stuff up here and there. Right now I’m reading Naomi Klein’s No Logo and re-reading Orwell’s 1984. For my day job I work in a library at an art school, so I’m surrounded by cool stuff all day. I’ve been reading this collection of interviews from Sex Magazine, a book of flyers from NYC nightlife, and a book about underground newspapers in the 60s and 70s called Power to the People. I’ve been listening to Metallica, Dead Prez, Lucky Dragons, Laurie Spiegel, and WGCI (1 of Chicago’s rap stations). I’m re-watching The Sopranos right now also. I haven’t gotten too many zines lately, but I did just get Scott Marceau’s new zine– that was cool. Red Steps by Sam Waller was a really good BMX zine too.  I just scooped up this surf magazine called, Acid, and it’s really sick.

Speaking of magazines, what did you think about Ride recently discontinuing print?
I think it is unfortunate.  They had great photos, and it was something that I’d imagine was in school libraries and grocery stores across the country. With that said, I’m partly to blame.  I wasn’t a current subscriber . . . I’m not some sort of print zealot- just because it’s printed, it shouldn’t automatically get a pass on being “good”. You know? I’m not saying that Ride wasn’t good or that what I’m about to say applies to Ride in anyway, it’s just that sometimes we put something on a pedestal because of the format or how difficult it was to do. I’d rather read a web site or blog that speaks to me, than a zine that doesn’t. The internet and digital stuff is cool because it can really democratize things for people.  That’s my plug for net neutrality and bridging the digital divide.

Absolutely!  Do you look at any BMX media in 2017?  What would you like to see more of?
To be honest- I’m not consuming it all the time. I like riding BMX and checking out cool photos and videos of my friends on social media. At this point, BMX for me is like how punk and hardcore is for me- it’s much more interesting live than it is recorded, generally. That raw energy is . . . just something that is so hard to reproduce. But that’s kind of why I wanted to make Challenger – something that I would be into, recorded, or rather, printed. I’m not sure I want to see more of anything in BMX –  anything I want is pretty easy to access. If you like street riding and trap music, you can see it.  If you like “roastin dubs” and saying “deah,” you can see it.  If you’re trying to watch vlogs, you can do that too. The whole gamut is out there in all of BMX’s weirdness. I’m going to contradict myself a bit, but I’d like to see things be produced better but not necessarily more professional. I’m not sure I can put that into words. 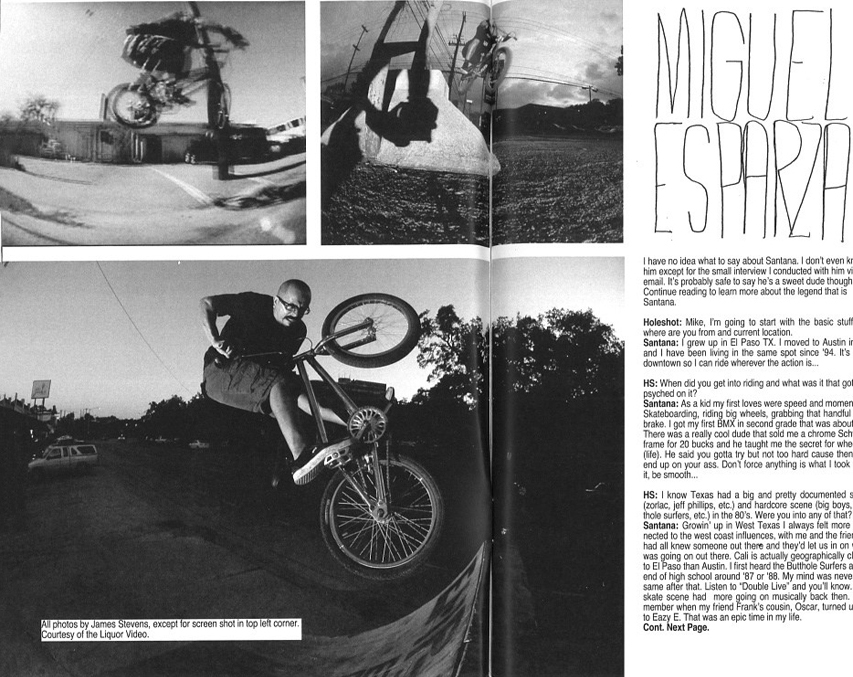 No, that’s good; that makes sense.  What do you love most about BMX?
BMX is the best. At its most basic level, it’s a bike – which will for sure go down as one of the best inventions in the world. It’s also provided me with a decentralized network of friends and acquaintances that is really mind-blowing. My parents are still kind of confused by the fact that it’s pretty easy for me to stay somewhere new for free. That’s one of my favorite parts – If you ride BMX, and you’re not a complete kook, you can usually go to a new place and crash with someone or at the very least, get hooked up with some tips on where to eat/party/chill/etc. I also love that BMX is no doubt the best therapy – for me anyway. It’s a cliché, but that post-session feeling is really unrivaled.

Do you have any advice for anyone out there trying to get a creative project off the ground?
One thing that has helped me out a bunch is to write stuff down and think through all of the aspects of the project – whether it is a one-time zine, a blog, or a year-long project. I’m totally not trying to sound self-righteous but this stuff takes time, and it can seem easy in your head but when it comes down to it, it can be super stressful and easy to feel overwhelmed. Writing stuff down like rough publication dates, an outline for the project, etc. . . . all of that takes time, but it really saves time. Doing that stuff has helped me visualize the end result, but also helped me manage my time – which is one of the things I’m in shortage of.

Me and you both!  Anything you want to add?
Shout out to everyone who contributed, subscribed, and sponsored the mag. Thanks to you all at Snakebite for running a cool site and taking the time to ask me questions about Challenger!
The last thing I’d like to say is BMX has always been a counter-cultural movement for me. BMX led me to things like punk, hardcore, hip-hop, rap, etc. It led me to really question a lot of the bullshit we are fed on a daily basis and really strive to be more open-minded. I’m not perfect in anyway, and I think a lot of times saying something like this can seem self-righteous and holier-than-thou, but that counter-culture idea is still really important to me –  even more so now with the current United States administration  – and yes, the previous administration did plenty of things I disagreed with.

If you want to get a hold of Challenger BMX Magazine, you can do so by hitting up your local shop or by clicking here!