According the Farmer’s Almanac, Saturday, June 21st was the longest day of the year in 2014. It also happened to be the date of San Diego mini-ramp tech master Dave White’s 43rd birthday and another awesome jam in his backyard. The weather was amazing, the bbq was kicking, and a great time was had by all. A few of the legendary San Diego area riders in attendance throughout the day included: Keith Treanor, Sean Yarroll, Dave Voelker, Mike Parenti, Steve Woodward, Sam Townsley, and Mike Grosse. Add a few young guns in the mix (Larry Edgar, Nathan Sykes, Matt Cordova) and what we got was a super-fun day of riding and hanging out, where everyone was entertained and stoked on BMX.

Dave was nice enough to answer a few questions about the jam and give us a little more info about his roots in BMX and about his backyard paradise, Area 43. Check it!

Interview and Photos by Paul Covey 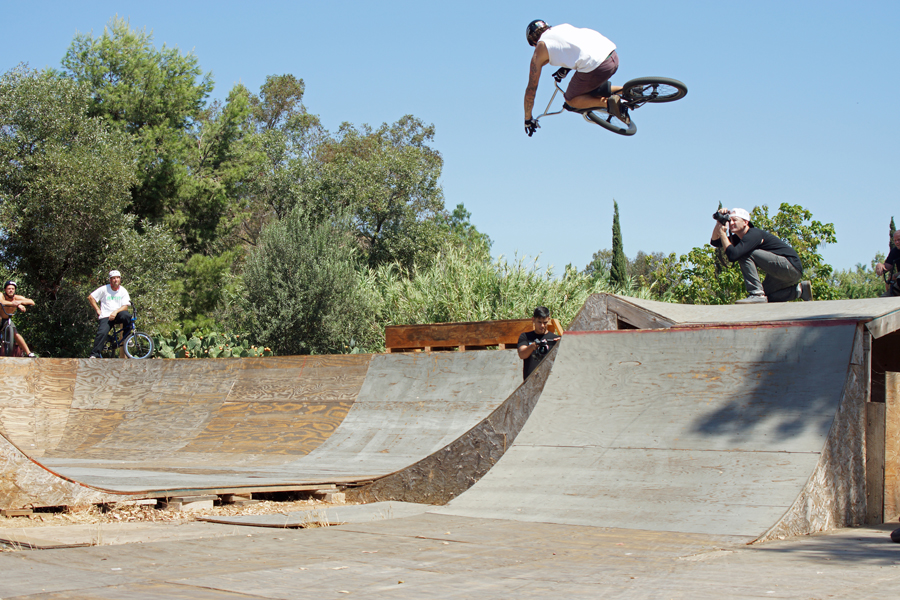 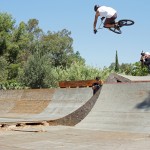 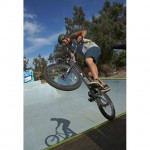 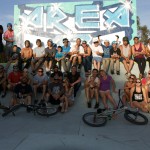 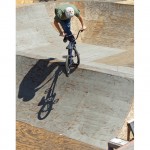 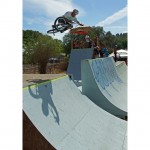 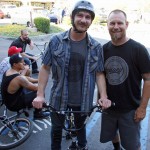 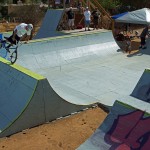 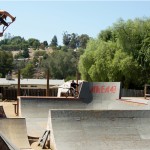 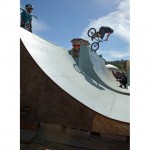 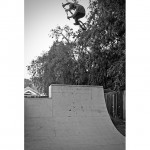 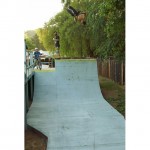 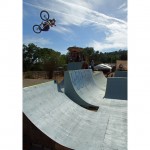 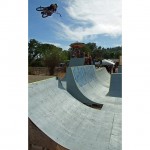 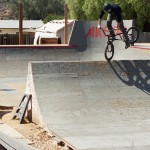 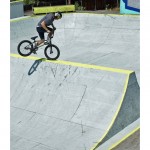 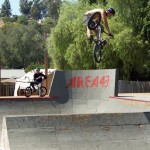 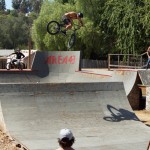 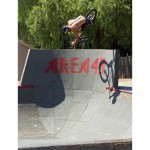 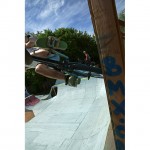 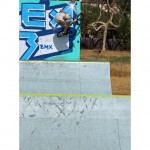 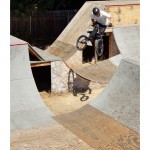 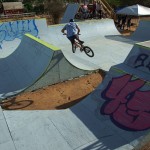 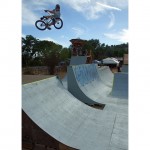 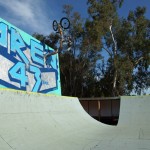 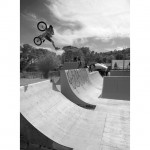 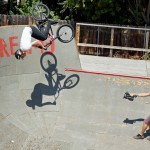 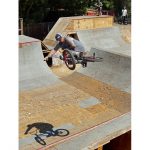 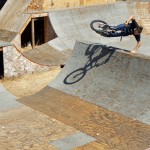 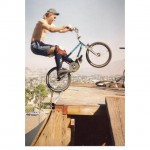 When did you start riding?
I was born in San Diego, but my family moved to Florida when I was 14. There was a pretty decent scene in St. Petersburg at that time. I had already seen BMX racing before, but that was the first time that I saw freestyle. There were several good bike shops in the area, and they were always having freestyle shows. There were also about 10 other kids that rode. I started out riding on a wedge ramp and a quarter-pipe.

What was your first real BMX bike?
I mowed lawns for a long time to save up and get a Mongoose Supergoose – that was around 1985…85 or 86.

When did you move back to San Diego?
That was in 1987. I remember watching the AFA Velodrome Masters. That was the contest where Dennis McCoy rode in the pro class for the first time.

Back in the day, did you have a favorite bike or one that you really wanted?
(Without hesitating, Dave answers) Well, I wanted the Haro Master… the lime green one with chrome in the back. My parents got me the cheaper Dyno Detour instead that was only $250. (Laughter) The next year I eventually bought a Haro Master myself though.

Did you ever have a bashguard bike?
Oh yeah I had a Bully…the blue one. I’ve got a picture of it somewhere.

Tell me about Area43. How did it start?
It was always my dream, and I used to joke with my friends, that if I ever won the lottery, or came into some sort windfall, and had property, that I was going to build ramps on it. When we moved into this house, we had all that space in the back. I mowed back there for a while and finally, it was just… I’m going to build something out here and stop mowing all this. (Laughter) My wife bought me 3,000 dollars worth of wood. And we built the first little mini half pipe section. You can see footage of that setup in Dennis Enarson’s “Three Spot Stop” video.

Not long after that, my father-in-law, who was a contractor, called after completing a job and said he had all this wood he was getting rid of on Craigslist. He asked me if I wanted to come by and pick any of it up before it sold. When I got to the site, there ended up being 6 semi-truckloads of brand new lumber all stacked on pallets! All plywood and 2x4s. I couldn’t believe it. I asked “how much” and he said: ”five dollars a sheet for plywood and five bucks for 2x4s.” I ended up giving him 2 grand, and I think we got 10 pallets of wood. It took a couple of days just for Brad and me to load it, transport it to the house and, unload it. We’ve kept on building since then.

Who all has helped out with the ramps?
Brad Winger is the main builder. Him and Sean Yarroll –they did the most of the work …the majority of it anyway. Lots of dudes have helped out for a day or two here and there, but they are the main guys putting in lots of hours.

Who is the regular riding crew?
Brad, Sean, Keith Treanor, Mike Parenti. Steve Woodward rides here a lot. There are a lot more. It’s a long list of dudes.

What are some of the radder things that stick out in your mind that have gone down on the ramps in the past?
Well, right off the bat – Bobby Altiser. That guy totally destroys the place. He is out of control. Another one that really sticks out is Simone Barraco. He did a nose-press on the sub-box. It took him 3 tries.

Who are some of your favorite people to watch ride your backyard?
Bobby for sure. Dennis Enarson rides it like it’s his backyard. He just destroys it. Gary Young comes up with crazy, different lines every single time he is out there. Lots of people kill it. They see it in videos or photos and have stuff they want to do on the ramps for videos or whatever.

They’ll have a list to check off?
Ya, Chase (Hawk) came through with a list of things. He got them done, and then he sat down for the rest of the session. (Laughter)

What was your favorite part of this most recent jam?
It was just cool seeing my friends and some of the older guys there. It was supposed to be an old man jam. Then the word leaked out and people just showed up. It was cool. But, as far as riding goes, no one has ever gone that high here. I hadn’t even gotten to ride that 6ft quarter yet and he (Larry Edgar) was getting 10 ft out of it. They were all blasting the hip…

What do you think makes the vibe at the Area 43 compound especially good?
My wife digs it all. She likes BMX, and is cool with people being here all the time. That’s a big part of it. –Also, at a normal skate park, you’ve got a broad mix of people: Skaters, scooters, sometimes lots of little kids. Spots can get crowded with too many people flying everywhere. At Area43 it’s just our friends, and sometimes our friend’s friends. The spot has a good vibe from BMX’ers just being able to build and expand and add new things. I’ve just built fun BMX oriented stuff to ride. Everything that we build was made to be ridden with a BMX bike. I tend to think that the good vibes come from the riders. We ride, Bar-B-Q, and mostly just have fun…everyone hanging out, talking and enjoying it.

Is there anyone you want to thank here?
Yes, my wife, Kyla. She didn’t have to let me build ramps or keep building more and more, but she did. I mean, she could have wanted me to put a garden in back there or something. (Laughter) Thanks to Brad Winger and Sean Yarroll for sure. They‘ve built so much and all the new stuff too: The slanted tranny wall beside the spine and the new 6 ft quarter. Then new paint job…Sean went to swap-meets, made deals, and bought tons of paint– Keith Treanor at Colony has come in a little later, but has contributed with time, money, and exposure. So has John Buultjens at Haro. Thanks everyone.

This entry was posted in Articles, Photos and tagged area 43. Bookmark the permalink.