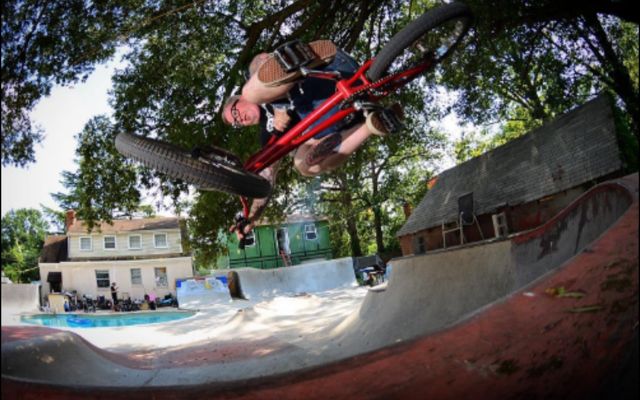 FBM Bikes owner Steve Crandall and his crew of alcoholic pirates have been lighting a fire under BMX’s ass for over 20 years. Anybody that knows Steve knows that he always raises the stoke level up several notches wherever he is. In addition to being the General of the FBM army, he is also the undisputed heavyweight champion of BMX announcers. His hilarious, smart ass announcing style is always a highlight of any contest he is at. I have had the pleasure of knowing the bastard for a long ass time and it was a blast to interview him.

“To me, Crandall is the soul of BMX. He gives it life through hard working innovations of rad. There is nothing more pure than FBM. They keep the dream alive by kicking ass and taking names. We are very lucky to have Crandall in the BMX world. When he and I hang out together having fun, we are unstoppable. 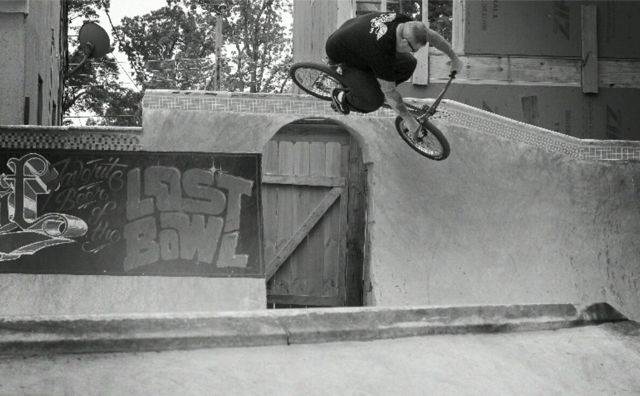 What was the first BMX bike you ever had?

I always had cobbled together bikes when I was growing up. Just random used parts on various old frames. I’d have a bike for a while, it would eventually get stolen and I would trade my baseball cards or something to my neighbor for one of their old bikes that I would fix up. Later on, as I got older, I would get hand me down race bikes from older riders in my area like Toast or Kelly and Kim Baker. I never had much money to buy new stuff, so I did the best I could by throwing shit together and hustling trades. I got a lot of cracked frames that my dad’s welder buddy would try and repair. My first brand new bike was supposed to be a Hutch Pro Racer, but during the time it took me to work and save up enough money, Hutch went out of business. So I ended up getting a a Haro Group 1.

After that bike, I rode mostly S&M bikes. Our crew was die hard into S&M products. 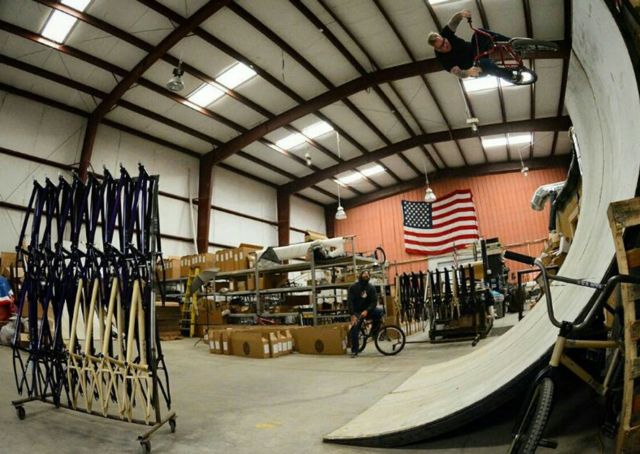 Talk a little bit about the early days of FBM and how you got it started and running.

There have been so many evolutions over the years of what FBM has become. It’s had several near death experiences and re-births over the years. There are so many layers to it. It’s not like we had a serious business plan and got a bank loan to start it. The essence of FBM started when a small group of friends on bikes started exploring our small town looking for fun on the outskirts of the mainstream. The first physical incarnation of FBM was when I started printing FBM shirts from a silkscreen kit I bought at an arts and crafts store. We started cementing the FBM legacy as an idea, as a way of life, and as an attitude in the late ’90s. We did that by riding, taking trips, making crazy videos, throwing jams, and by making badass bikes and gear. It all started with a core group of friends from a nowhere town in upstate New York. 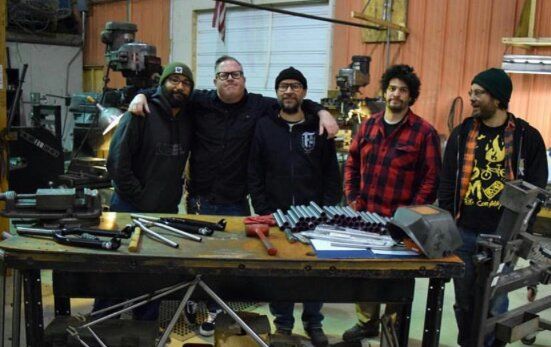 Besides eating lightbulbs, what’s the gnarliest thing you have seen Lou Bickle do and how drunk was he when he did it.

That’s a tough question. There are so many ape shit things that Lou has done over the years…One particular incident comes to mind from the FBM Gypsy Tour that Lou went on with us after he had just gotten out of prison. We had a big party at Derek Adam’s house and backyard trails. There were bands playing and tons of people were there. There was also a really long slip-n-slide type of set up that was down a big hill. It was all watered down and slick with soap. Lou stripped totally naked, got a running start, and goes screaming down it. People were sticking out dollar bills and Lou was grabbing the money and sticking it between his ass cheeks…I’m not sure if that’s the gnarliest thing he’s ever done, but it was severely epic.

He most certainly is. 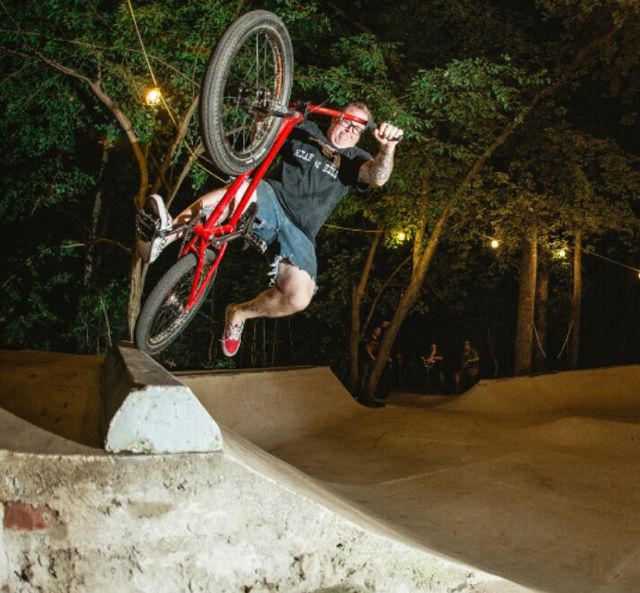 Which FBM team rider has executed the worst smelling fart on the FBM bus?

There have been so many horrible farts unleashed on the bus, it’s hard for me to narrow it down to one person…If I had to choose somebody, I’d say Ryan Corrigan. His gas is toxic as fuck.

While we’re on the subject of the FBM bus, what’s the current playlist on the stereo consist of?

The current bus jams include Bob Dylan, The Minutemen, The Descendants, Annihilation Time, Woody Guthrie, Puff Daddy, and lots of other shit. 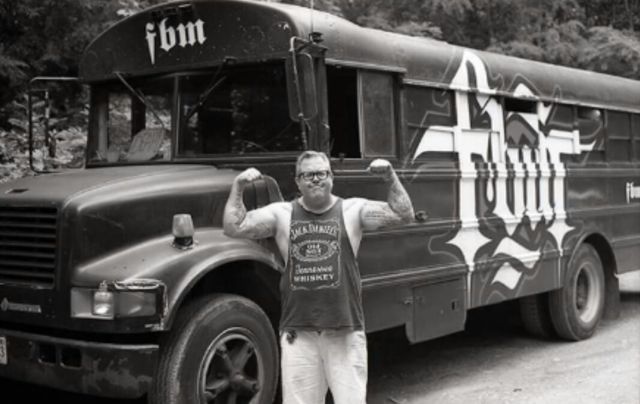 You have traveled extensively over the years. What are some of your favorite places to raise Hell?

It’s usually who I end up seeing and hanging out with, rather than the location, that makes a trip memorable for me. Recent highlights include riding the Nude Bowl out in California with Van Homan and riding the Buena Vista Bowl with Ron Wilkerson. That was epic. I went to Berkeley Springs West Virginia this past year and sat in a very cold spring water creek that George Washington used as a bathtub. I had the greatest cup of coffee of all time in Savannah Georgia not long ago. One place that I’m always super stoked to visit is Carrboro North Carolina. There is a pallet bowl there called Gnarrboro that is awesome as fuck. The crew there is always a lot of fun to hang out with. And I always love roaring through the streets of NYC in the FBM bus. That never gets old.
As far as traveling goes, as long as the weather is good and the people are cool, I’m stoked to be wherever I happen to be. 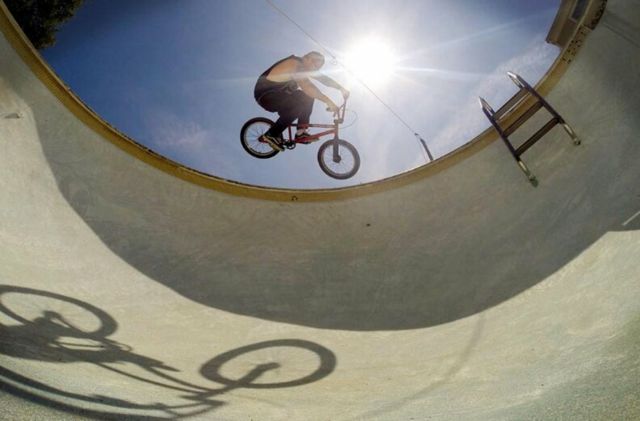 What is your opinion of the current condition of BMX?

I’m glad you asked me that. I think it’s a pretty layered scenario. Is BMX a sport? An industry? A lifestyle? All of the above? I hit my first sketchy jump on a second hand bike in the mid-80’s and my first race was in ’86. I have been involved with the industry side of BMX in one form or another since the early ’90s. From working at bike shops assembling bikes, to working with my crew at FBM making bikes and submersing ourselves into all aspects of BMX. There’s a lot that has changed since I was a wide eyed grom. There are skateparks and places to ride in almost every town. You can buy a flat rail to put in your driveway. New video edits and photos of your favorite riders are available to watch on your phone everyday. There is unlimited information and inspiration to ride. It’s crazy. If you look at the bikes themselves, they are better than they have ever been. You don’t need a fuckin’ hammer to put the damn thing together like you did back in the day. Bikes today also last longer, are safer, and many times are made by rider owned company’s and are sold at rider owned shops. It’s so rad.
Riding itself has obviously progressed to a mind blowing level and it seems like there are more super sick riders now than ever. 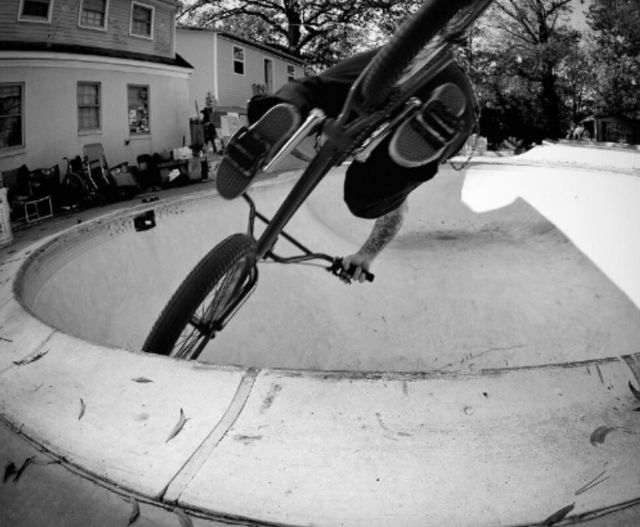 Kids get so good so fast these days.

Yep, totally. And it’s weird because there are so few contests these days. The TV network / energy drink contests seem to be the only thing really going on these days. There were TONS of contests back in the day. Some other negative aspects of modern BMX are that BMX specific bike shops are often struggling, it’s harder for pros to make a decent living, and a lot of the creative individuality that has always made BMX so amazing seems to get overshadowed by some lame internet popularity contest. Even though riders have better bikes, more places to ride, access to more motivational media, and the riding has progressed to an amazing level, it seems like a lot of mainstream BMX is still limited to its own herd mentality. I travel a lot, both for big events and to visit some of the weirdest underground BMX scenes that are going on. The energy and level of riding at a Vans Invitational contest or an X-Games, which are rad, is matched by the passion, dedication, hard work and spirit I’ve seen from riders who dig their own jumps, build their own ramps and DIY spots, and create their own scenes. Those are the kind of riders who work regular jobs and save up money so they can take off and travel and meet new people and explore new scenes. Those are the people that make BMX so awesome. They aren’t pro BMXers, they are mechanics, musicians, teachers, students, firemen, weirdos, kooks, drunks, hustlers and everything in between. They ride BMX because they love it. No other reason. When I meet and hang out with people like that, it makes me proud to be a BMXer. I’m so stoked to hang out with all the people with broken teeth, scarred up shins, checkered pasts and uncertain futures. People that are untethered to the reality that normal society embraces. When I see BMXers riding and doing cool shit and having a laugh while they do it, I think the current state of BMX is as rad as it’s ever been.

Very well said. I think we’ll just end it there. Thanks for doing the interview, you spectacular motherfucker.

“Stone Cold Steve Crandall has been a dedicated advocate for BMX through the lean times and the salad days.
He continues to spread the deah through his legendary brand FBM by putting on events around the country with little more than an old school bus and a prayer. In a time when fake, fleeting fame is just a few likes, comments and follows away, lessons can be learned by Steve’s life long commitment to life on two wheels.” 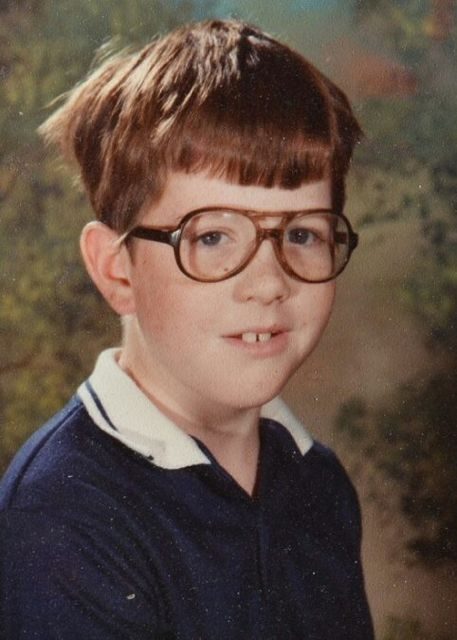 3 Responses to Getting Loose With Lee // Steve Crandall Interview