Hoffman Bikes 25th Anniversary Tribute // Inside HB during the Mid-90s 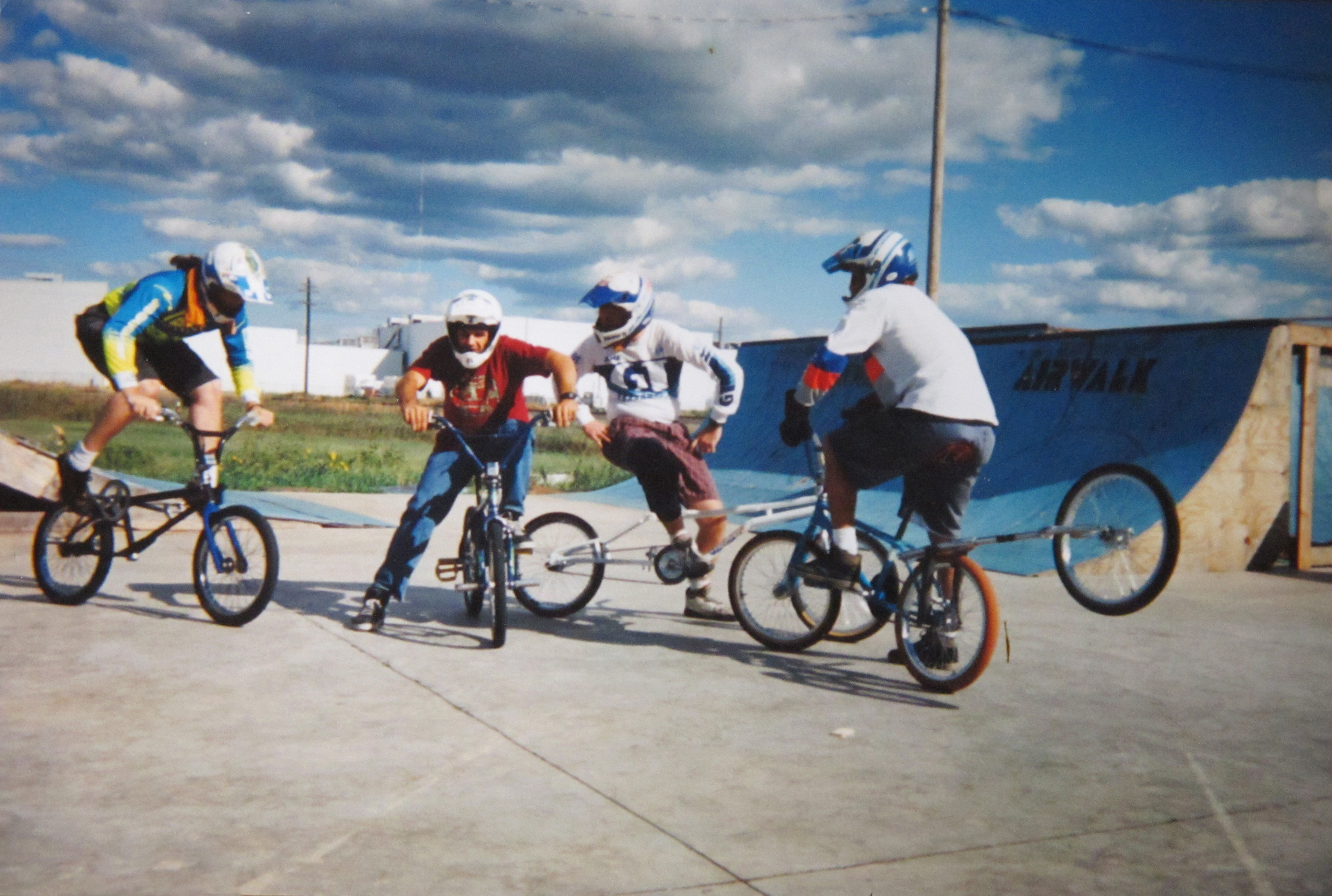 It was my good fortune to hang around the Hoffman Warehouse a lot in the mid-90s while attending college in OKC. I even worked there part-time when I wasn’t in school, and snagged a few photos and bits of memorabilia over the years. To convey the full extent of the influence of Hoffman could fill volumes, but here is my small way of throwing it back to the Hoffman Bikes heyday, and looking forward to the possibilities ahead for BMX.  If you have any HB memories or BS Contest stories to add, please share below in the comments.

By Paul Covey
CHECK OUT MORE >> 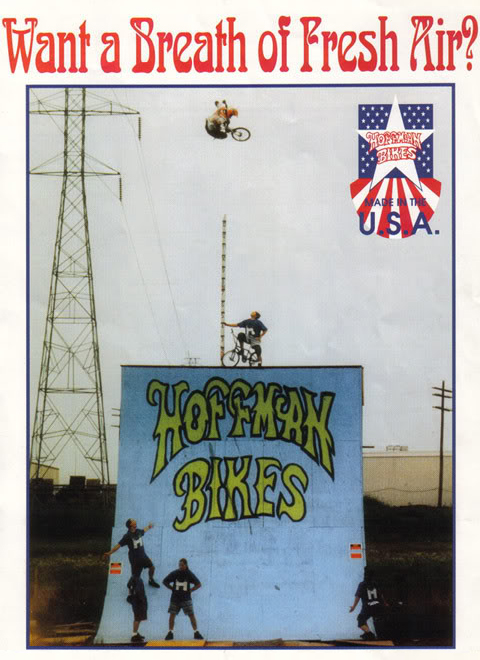 This was the cover of the first HB product catalog in 1992. The photo, taken by Mat’s sister, is one of the most renown images in BMX.  Inside one could find full color, high-gloss product photos taken by Spike Jonze.

Screen grab of Hoffman stretching a can-can lookback in ’93.  While still in high school, a couple of friends and I drove up for a few days to help Mat and Chuck D build ramps for the soon-to-open Hoffman Bike Park.  After working on ramps out in the sun each day, we got treated to  insane vert sessions while rocking out to Public Enemy well into the night. 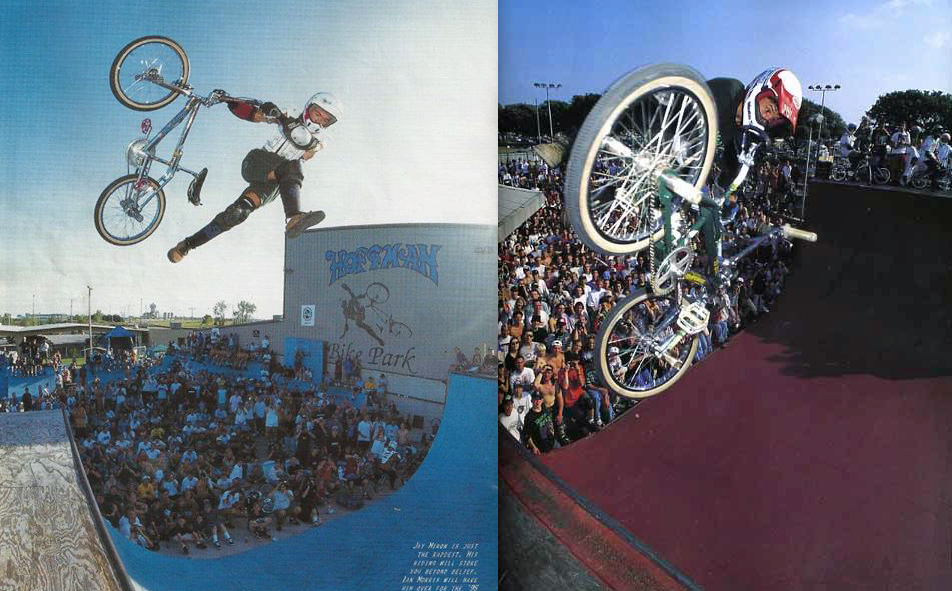 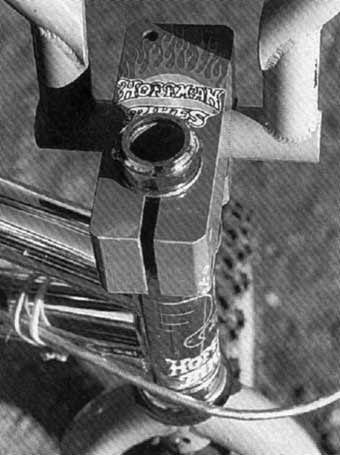 Super Forks, an early HB product, were a big improvement over the existing wedge bolt stem systems of the day.  With a machined one-piece steering tube that held an i beam insert, double-thick dropouts, and a clamp-on stem, the design was developed over time with input from Chad Herrington, Mat, and Kris Gack. Photo:  BMX Plus! 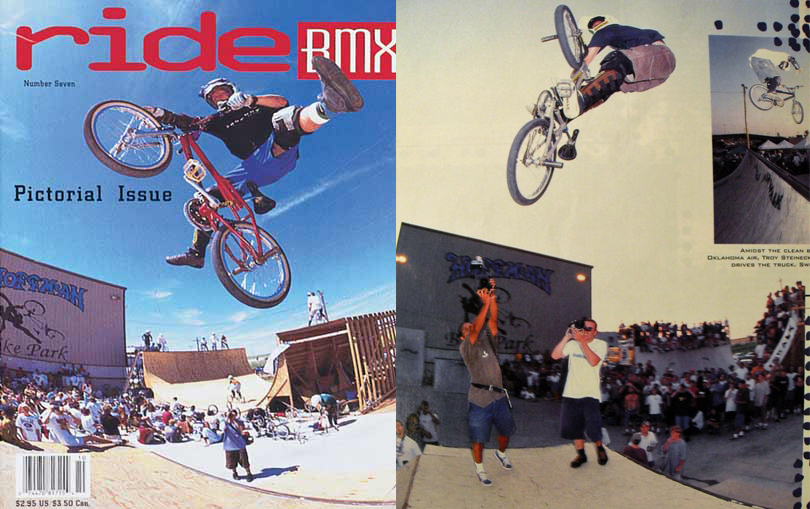 Joe Rich and Taj Mihelich, Hoffman Bike Park. The design of the Hoffman Park would become a template for skateparks and contest courses worldwide for the remainder of the decade. Photos: Brad Macdonald

I took this photo during the filming for Madd Matt.  Welder Shane Kinsley is on an upside down Mongoose, that’s Mat muggin’, Kris Gack is on the stretched GT, and Paul Murray is on a 3 wheeled Haro Sport.  This was supposed to represent a dream sequence, where Mat was being chased down by the big 3 brands at the time.  I don’t know if it ever made sense to anyone else, but it sure was fun to observe the process. Mark Eaton is the man. 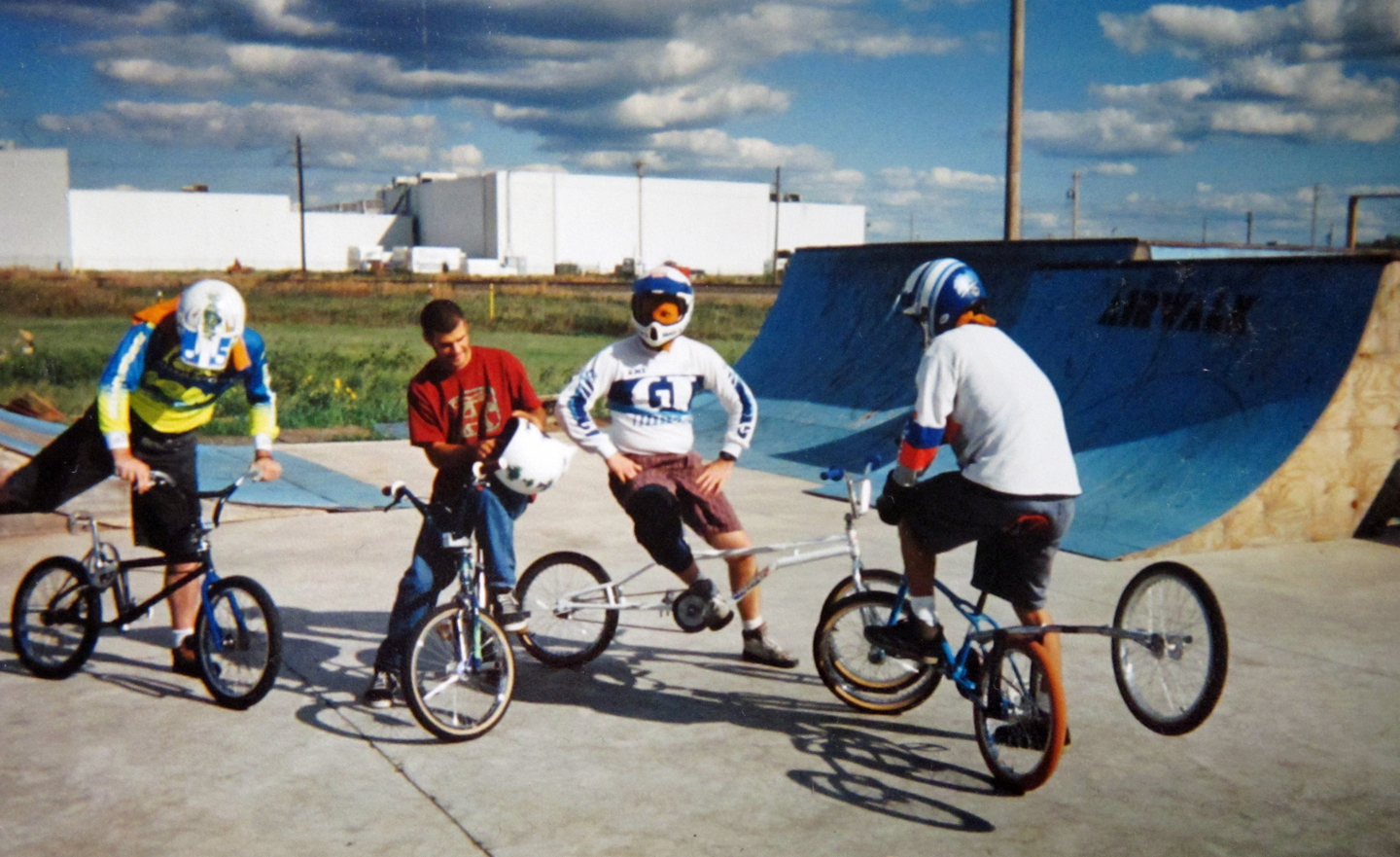 The triple XL GT Pro Freestyle Tour that Gack is on haunted the HB offices for years.  It was a regular commuter to the convenience store, and even saw a few brief vert sessions. 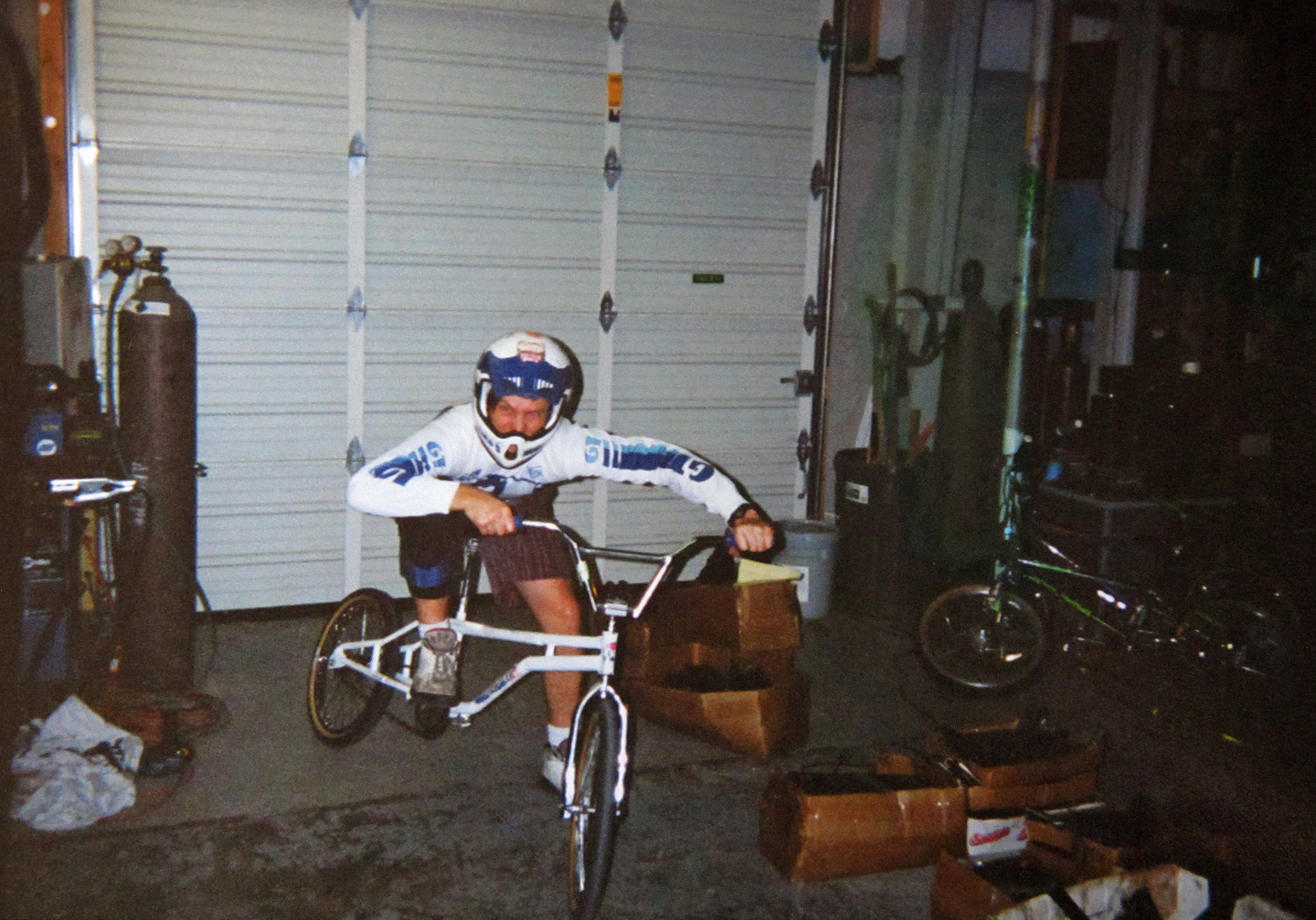 Left: 14mm Gack hub and axle prototypes.  Right: Production model Gack hubs. Kris had been busy developing 14mm hubs and axles quite a while before connecting with Hoffman Bikes.  Burly riders like Mat, Taj, and Miron were already modifying their dropouts and running prototype Gack hub variants years before production models were made available.  It’s hard to imagine riding with a rear 3/8s axle now, but up until this point, there weren’t any other viable options. 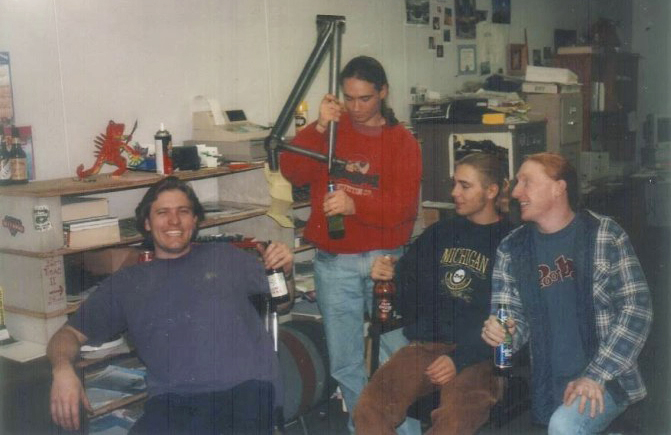 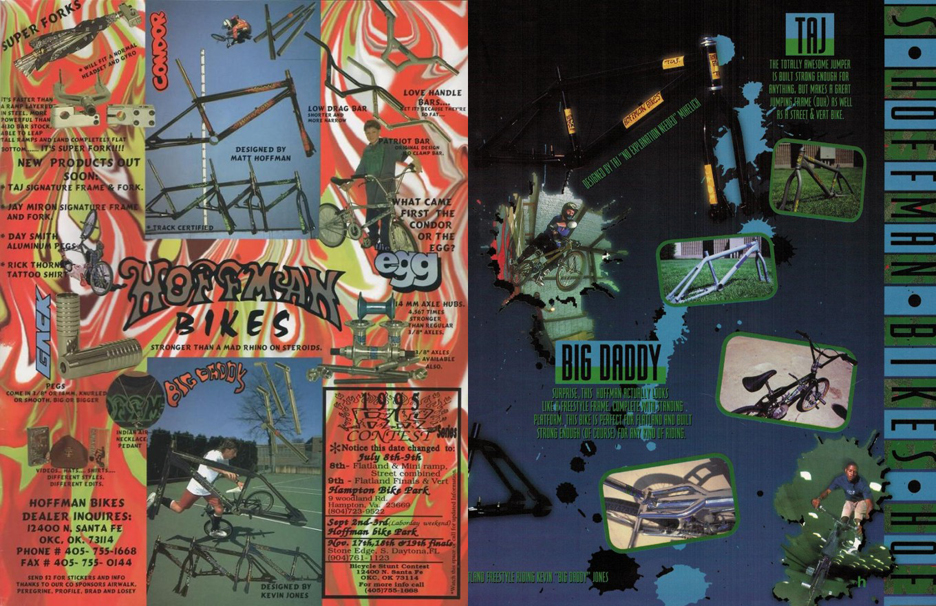 Left: An early magazine ad from 1995.  Right: A page from the 95-96 catalog.  If you purchased a ramp room Condor, Big Daddy, or TAJ frame between 1994 and 1996 there’s a good chance that I applied the stickers, polished the 990 mounts, reamed the seat tube, and installed the 990 barrel adjuster. 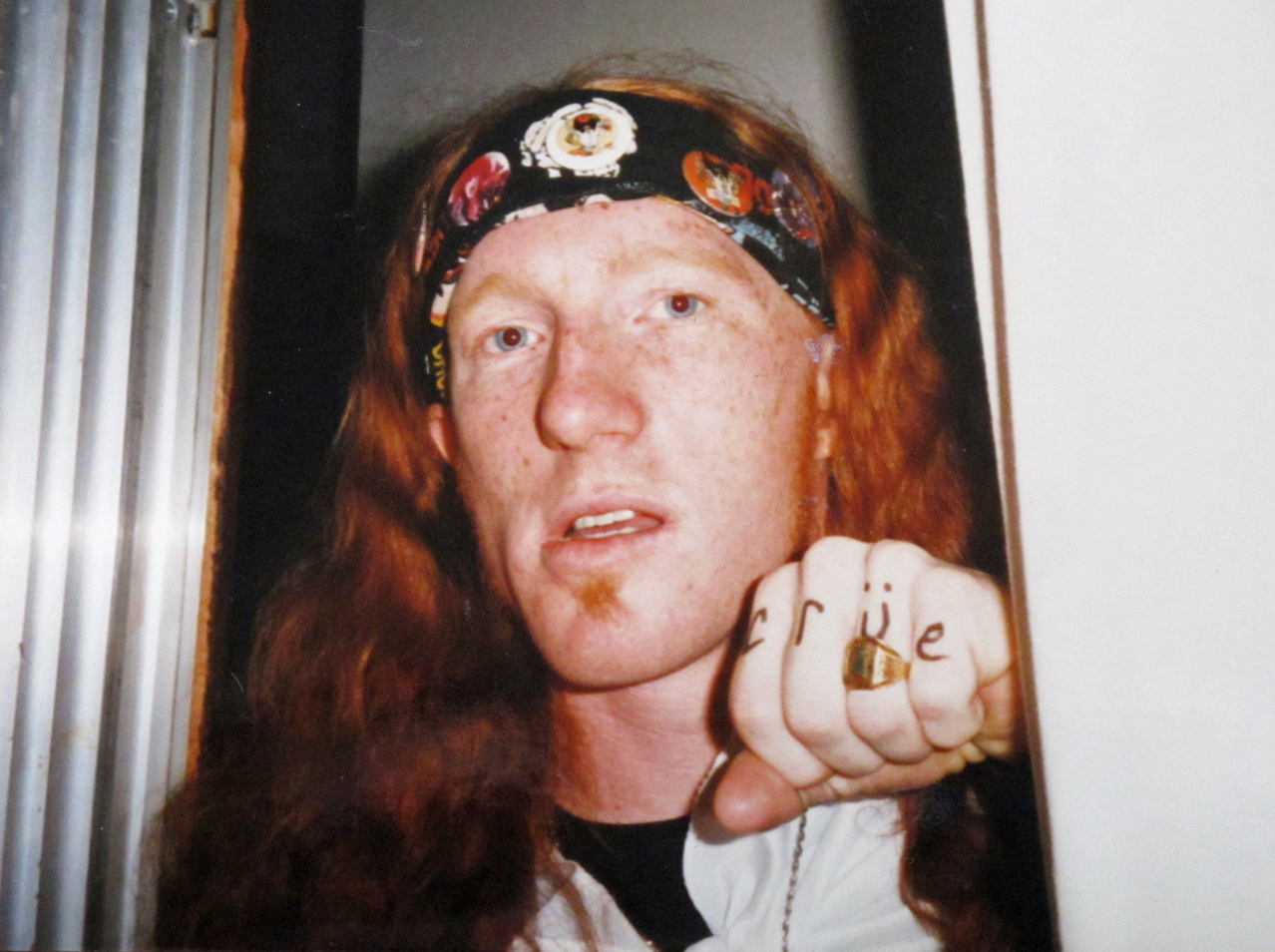 Mark Owen, aka Chuck D, was the real deal jack-of-all-trades at Hoffman Bikes. Skilled at numerous crafts, able to shred vert, flat, street, and dirt, and in possession of every punk rock CD ever made. He’d often adopt a crazy, convincing persona for the evening and never break character. Here he is dressed as a heavy-metal hessian for a Halloween party. 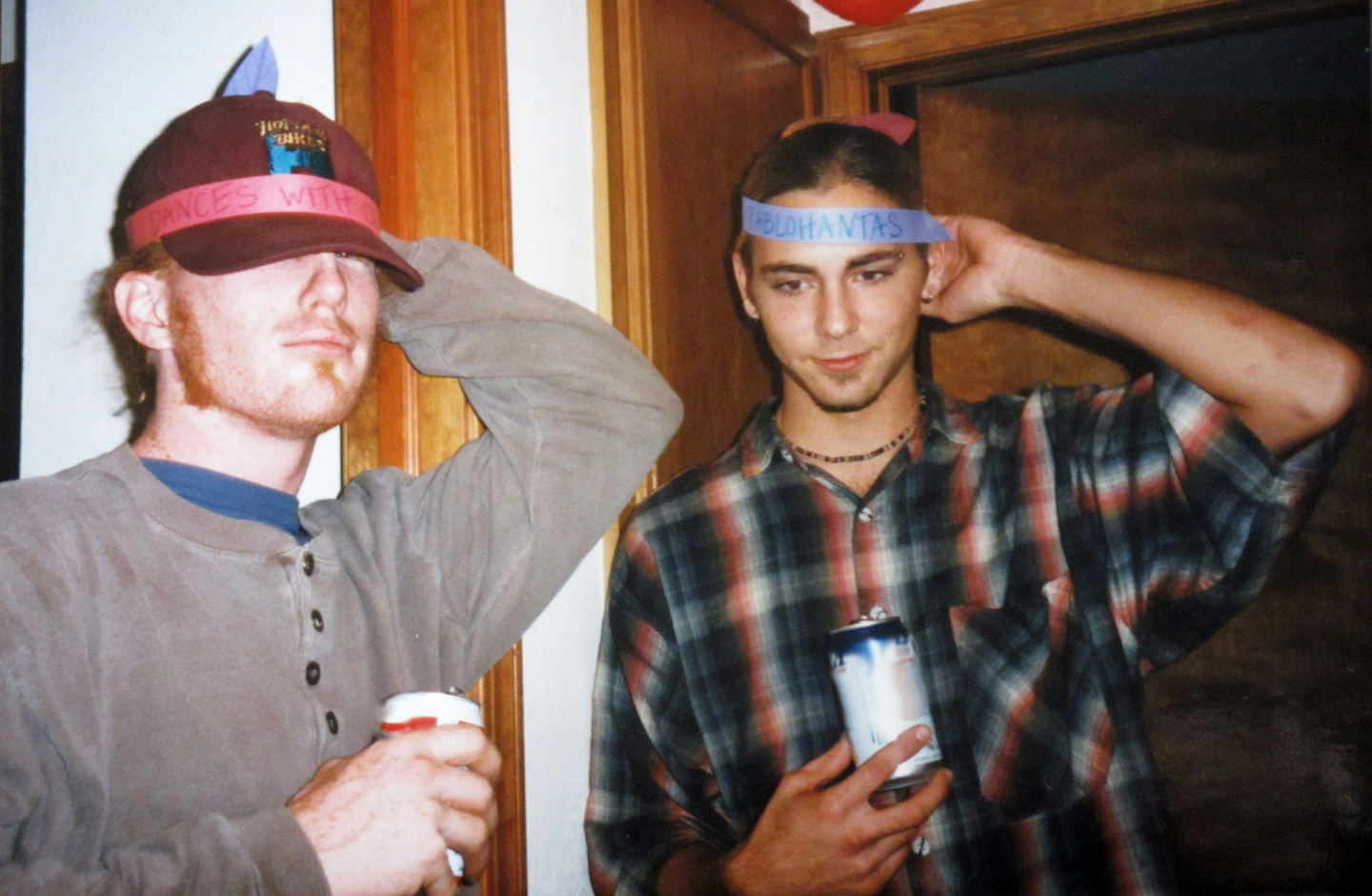 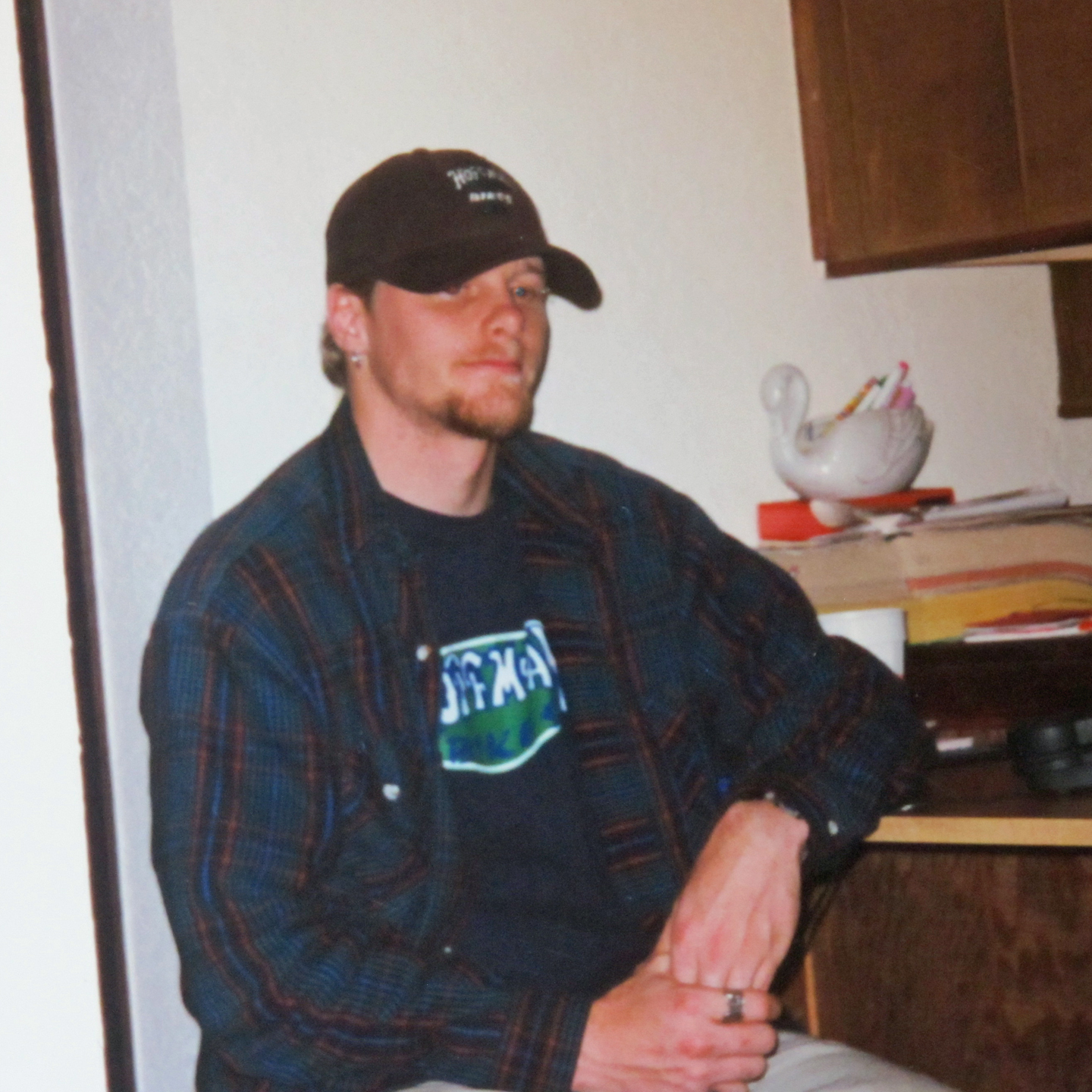 Keith Treanor rode for S&M but was a regular in Sprocket Jockey shows.  Keith, Mike Ocoboc, Mike Griffen, and Gerry Galley all logged extended stays in Oklahoma City and couch surfed at my place for a while.  Keith as you know is still killing it with Colony and has a much anticipated Dig X Snakebite podcast coming soon! 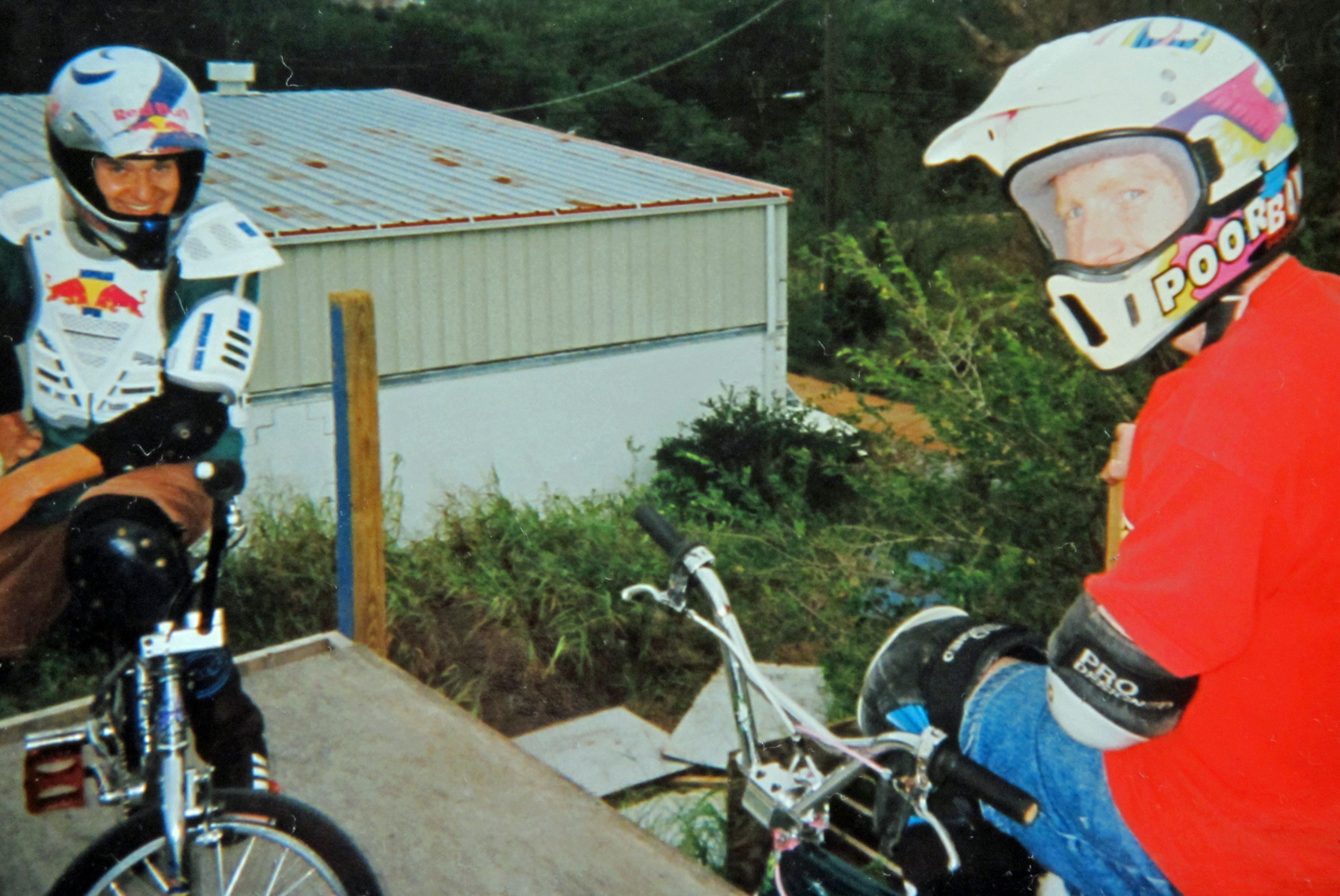 Achim Kujawski and Mark Owen in the middle of a good vert session.  Achim was Hoffman’s German rider and would visit OKC for a few weeks each year.  In 1996 he showed up with a strange new co-sponsor in the form of an odd tasting drink in a shiny silver can called Red Bull.   Achim had the Austrian based distributor ship over 48 free cases and before long, everyone in the office was pretty much addicted.  Panic swept through the halls after Achim returned home to Germany and our supply dwindled. Red Bull wasn’t made available in the US until 1997, a full year later, so we all had to sweat it out. 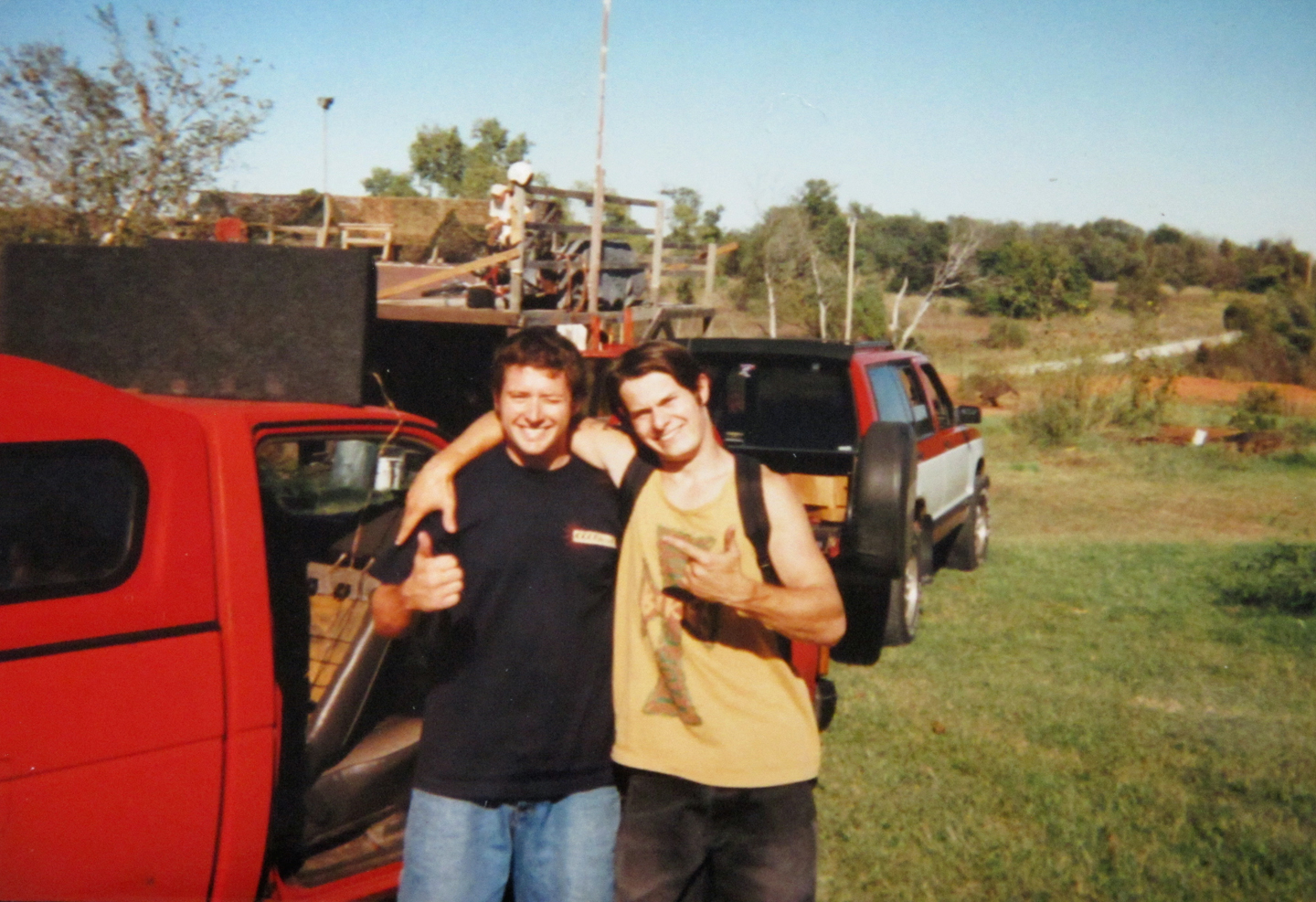 Steve Swope and Achim Kujawski.  This was taken at Old Man Jim Blackburn’s Ramp compound about an hours drive from the HB warehouse.  From time to time, some of the crew would make the trek to session the ramps with Blackburn, a 55 year old high school teacher who could still do peg grinds and 360s.  Keepin’ the dream alive. 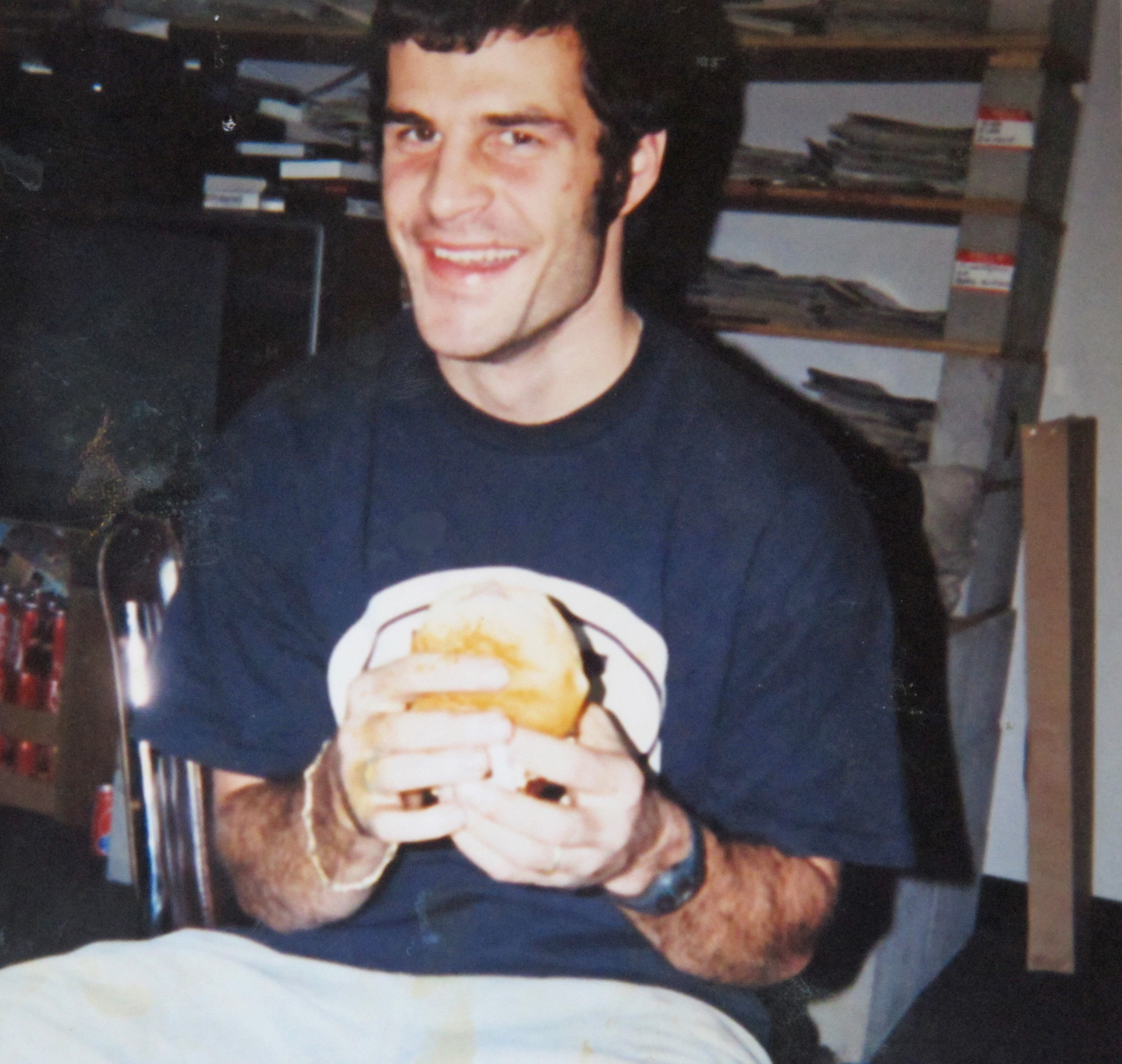 This photo of Mat eating a hamburger is pretty uninteresting, but it’s noteworthy because the bookshelf behind Mat held hundreds of old bmx magazines and pretty much every VHS bmx video ever made.  Graciously, Mat and Steve let me borrow any tape whenever I wanted. Many of the cases were unlabeled, so I didn’t always know what I would be watching later that night back at my apartment. Sometimes it would be a classic bmx video, or some random rider’s sponsor me tape, but there were also tons of Mat’s old practice videos from when he was a teenager, riding vert solo with his camcorder on a tripod. If you follow Mat on social media, you know that some things never change. 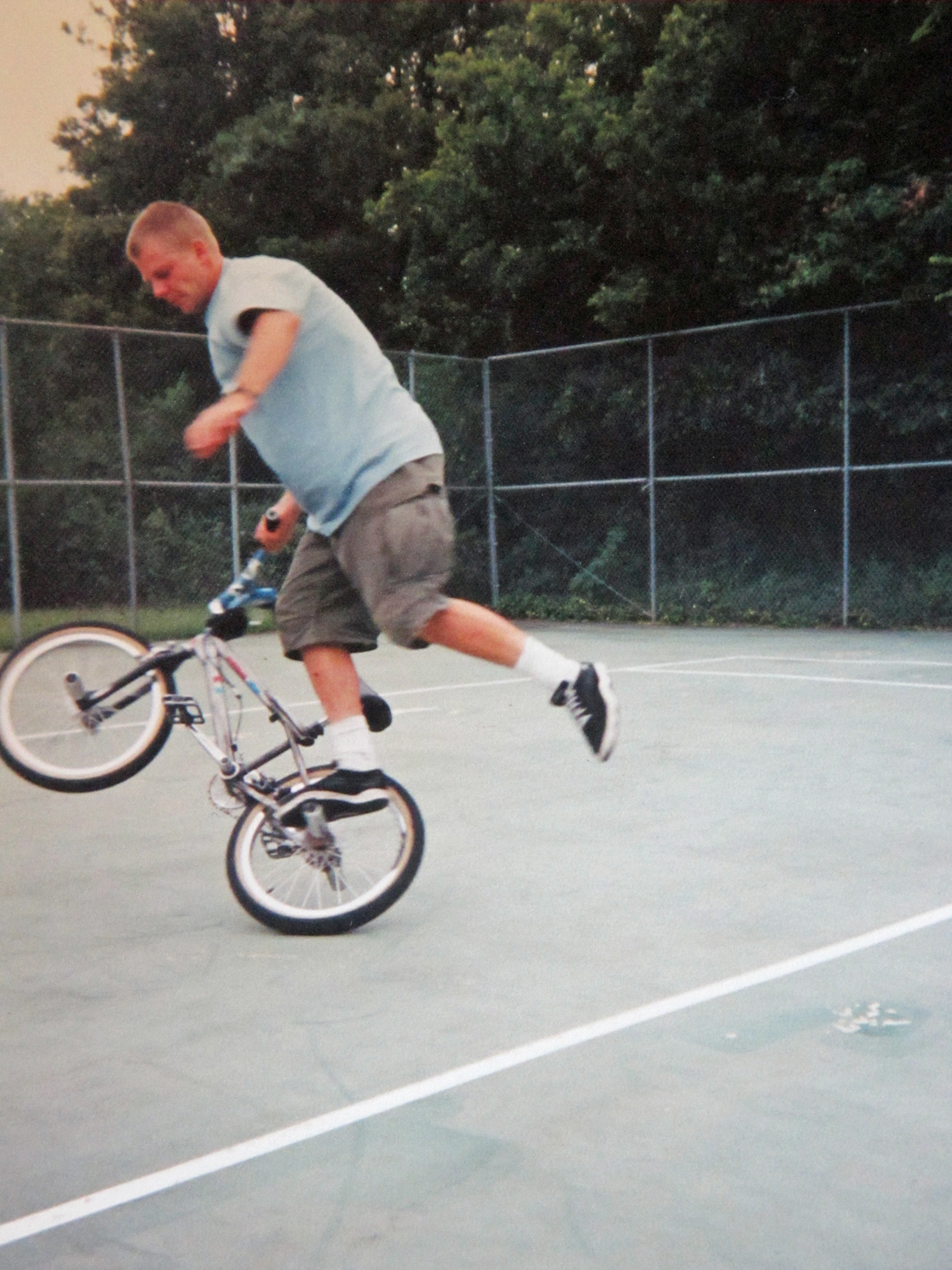 Leif Valin was one of my all-time favorite riders on the  Hoffman team. I was always stoked when he was visiting.  Leif was just as down to session the mini or ride street as he was to drink coffee and talk, or ride flat at these tennis courts that we were kicked out of just after I took this photo. 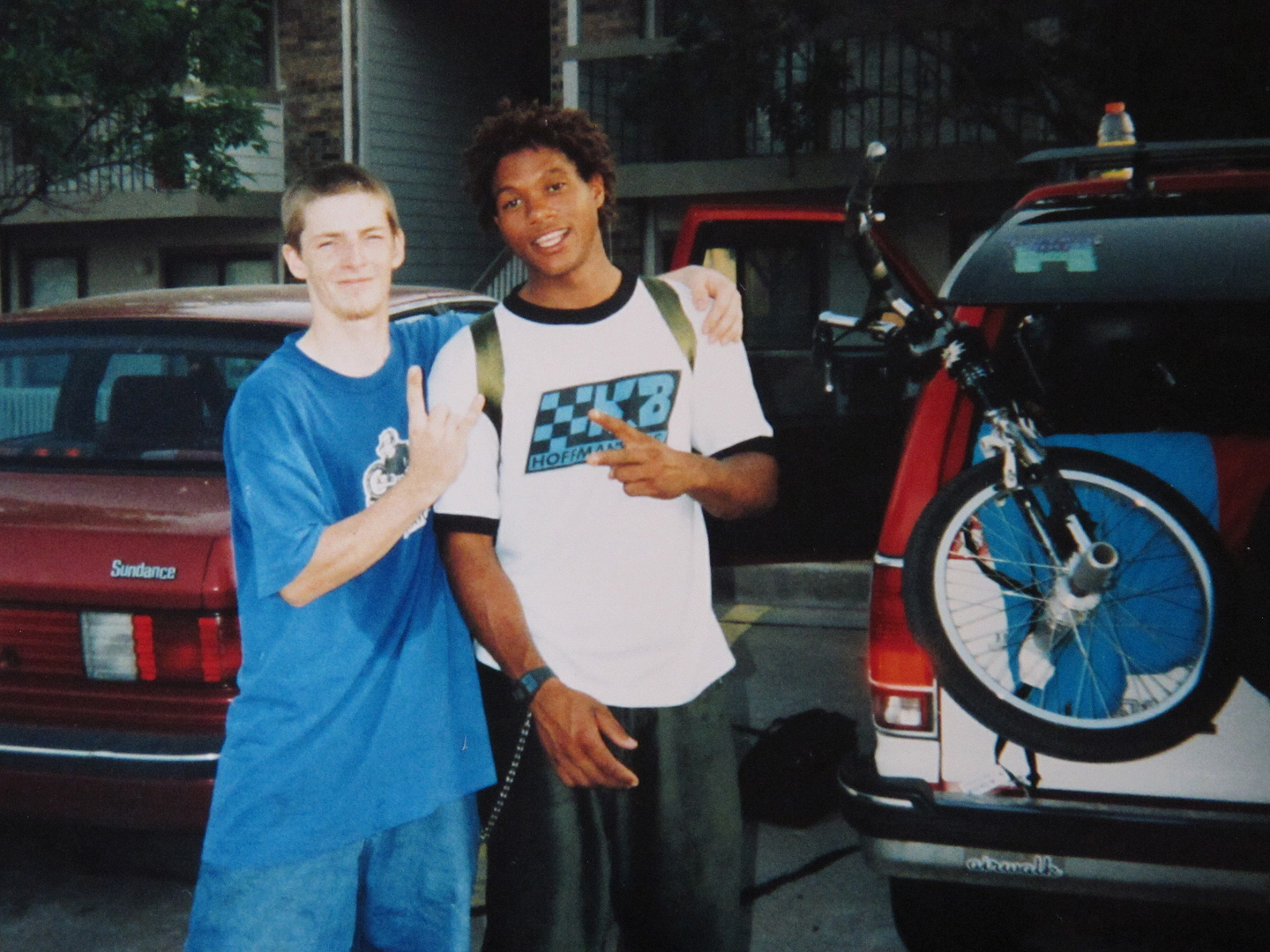 Tulsa local, Matt Gibson and Fugitive Day Smith rounded out the flat team. After achieving his personal goal of appearing in a Dorkin’ Vid (Balancing Act), Gibson started riding less flatland and more trails.  Day is one of a kind and brought so much style, control, and power every time he rode. 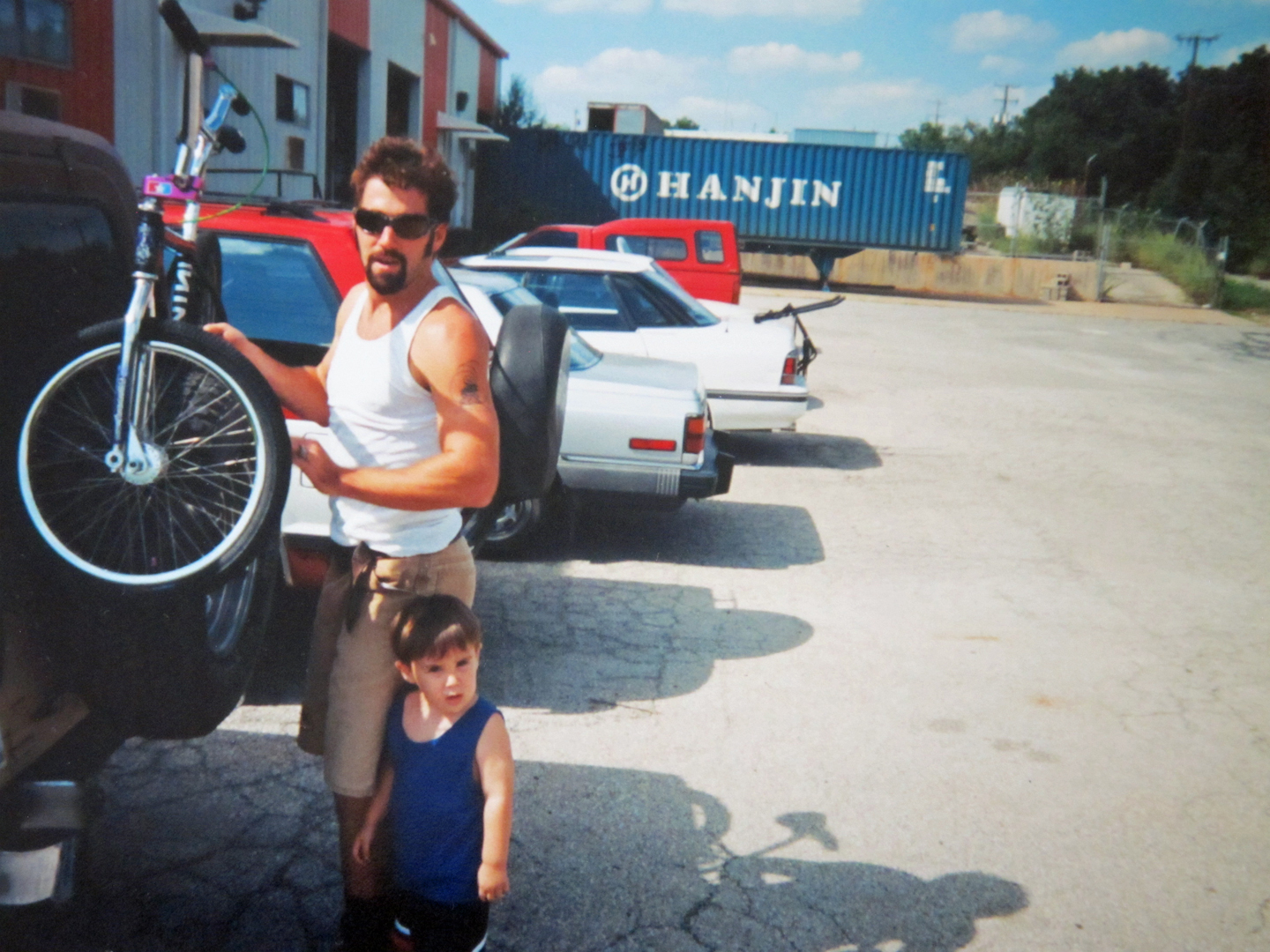 Davin “Psycho” Halford with his son, Dravin Groove.  Dravin, now in his early 2o’s, also shreds, and is on the current HB team roster.

A couple of Psycho’s drawings I’ve held on to. 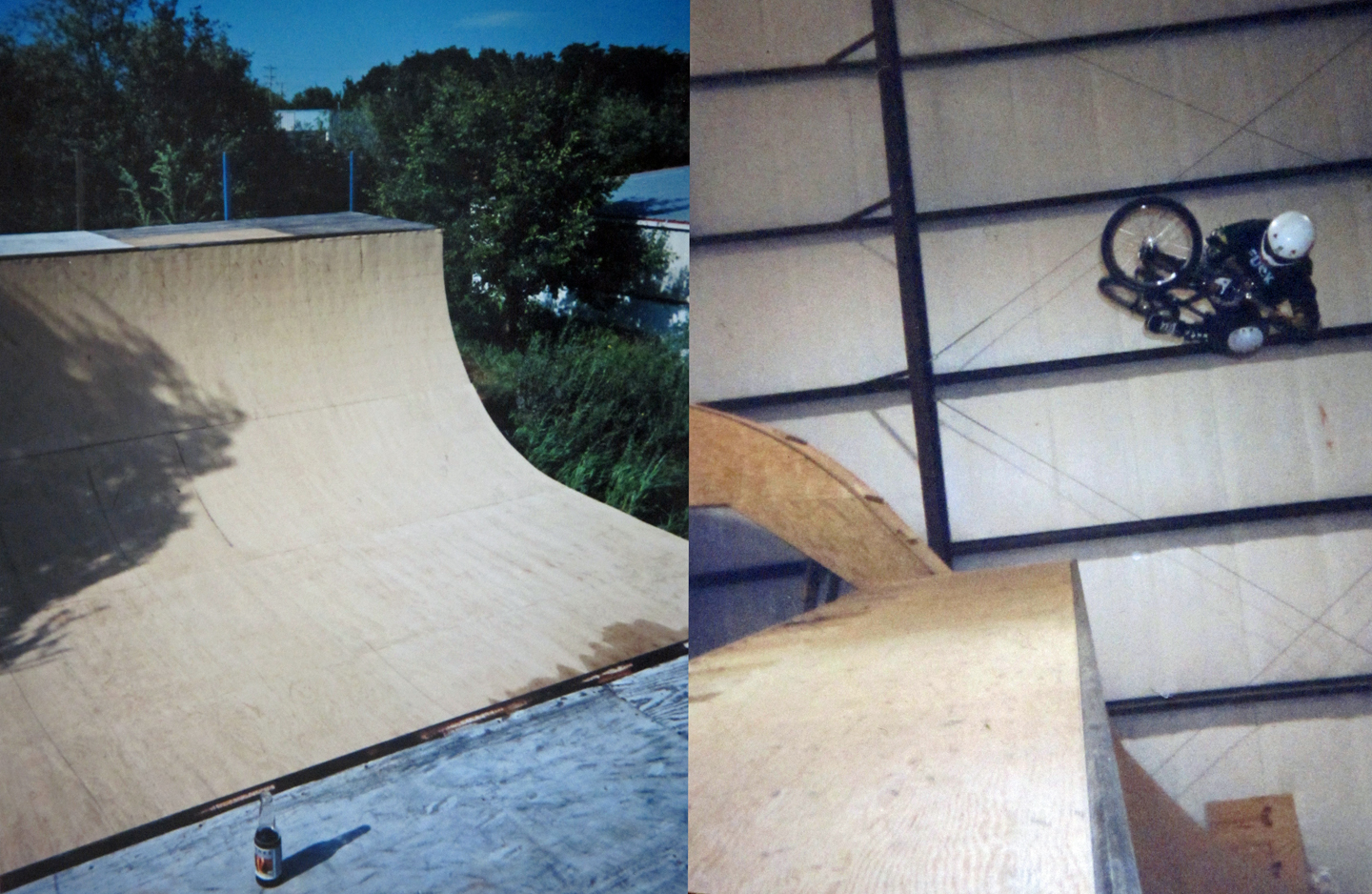 There’s no telling how many ramps we built and demolished over the years.  On the left is is a portable vert ramp set up outside of the second warehouse.  On the right is Psycho, airing the indoor vert ramp; its likeness can bee seen in Mat Hoffman’s Pro BMX video game.

Screen grabs of Hoffman blasting a table and an Indian during a vert demo at the very first Warped Tour in 1995.  I remember that we had lunch with the all-girl punk band, L7, later that same day.

Hoffman at height riding the Secret Ninja Ramp of Death.

Among his many accomplishments and in the wake of the 1st freestyle recession, Mat Hoffman threw his hat into the ring of the faltering BMX industry with the simple idea of making top-notch USA made frames and parts that could withstand the abuse of modern riding.   Hoffman staffed a machine shop with actual riders doing the cutting, machining, welding, etc., in the Midwest, during a recession.  He successfully developed and manufactured innovative products in house, in the USA; many of those same innovations and designs are still being put to use on the bikes we ride today.  Along the way, Mat , Steve, and the crew also created the BS Contest series, built enough ramps to devastate a small forest, sponsored a who’s who of bmx nobility, produced some notorious team videos, set a few high air world records, developed a video game, and performed as the Sprocket Jockeys, promoting the bonzi-radicalness of BMX freestyle to the world. Hoffman Bikes is one of the most significant and influential among the handful of rider-owned companies to blaze the trail in the early 90s.

Time marches on, and eventually my years at HB came to a close.  I graduated from university, took a new job, and later moved to Austin, TX.  I learned a lot from my experiences with everyone in the Hoffman crew and am forever grateful that they allowed a small-town kid like myself to be a part of the early era of one of the sickest rider-owned companies ever.   When I first moved to OKC, I could barely clear a box or jump a spine, but by the time I left I had become a more well-rounded rider, with a stronger work ethic and greater willingness to take risks.  That time and those relationships were invaluable teachers that I’ll never take for granted. 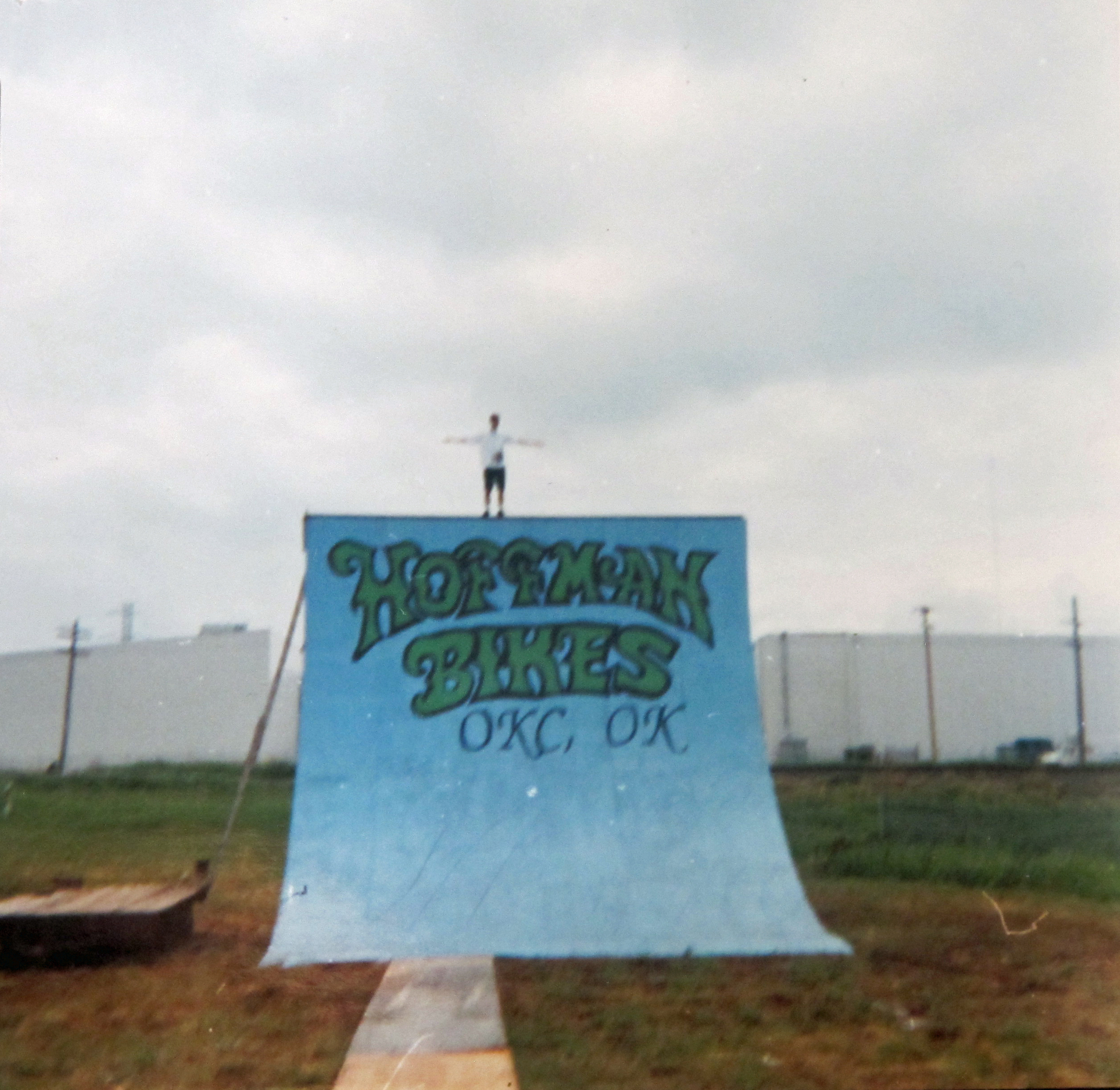 That’s me standing on the deck in July of 1993.  Glad to have this photo so I can remember the feeling of rolling up and seeing this ramp for the first time.