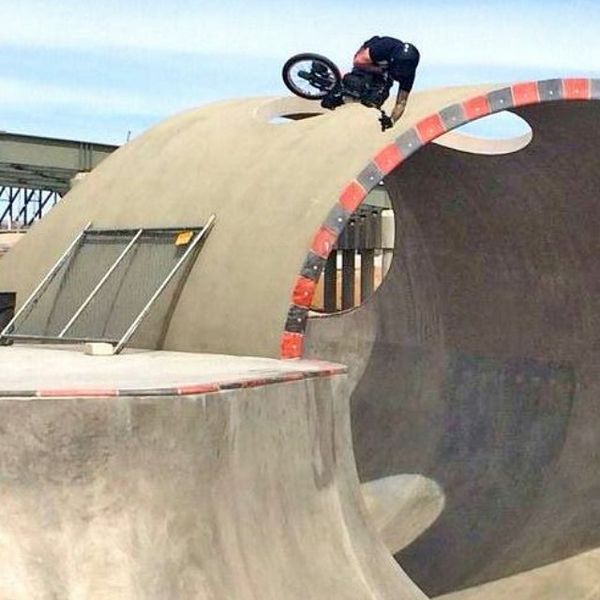 Pat Miller has been a good friend of mine for 20 years. With a penchant for Maker’s Mark whiskey and big balls airs, Pat was (and still is) a vert powerhouse. He was sponsored by the top brands of his era (GT, Schwinn, and Redline). He toured with the Lollapalooza music fest and was one of the first dudes to spin a 900 after Mr. Hoffman dropped that game changing trick on the world. He also survived a four year stint living here in Austin drinking and going ape shit with top level mayhem instigators like myself. Pat has a very storied and colorful history in BMX and we have raised a lot of Hell together, so this interview was a natural fit. It was a absolute honor and pleasure to take a trip down memory lane with him.
Questions/Interview By Lee Sultemeier 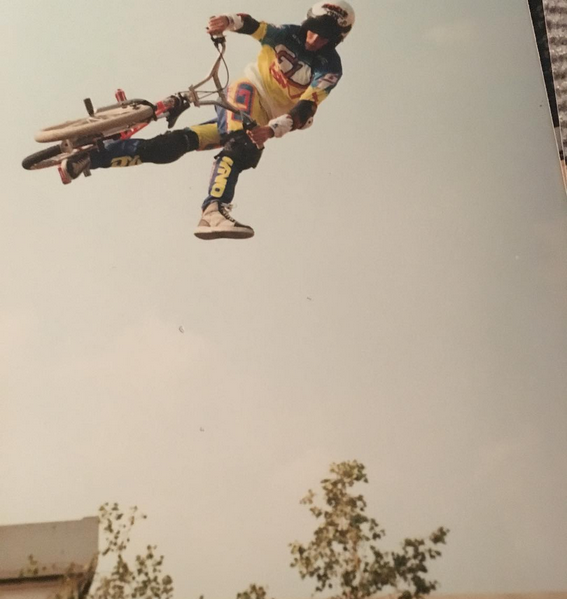 The year was 1992 and I lived in Fort Wayne, Indiana. I had just graduated from high school and somehow landed a job at the local skatepark. They had been open for four years, but didn’t allow bikes until that year. We decided that a contest was in order to celebrate and let everyone in the midwest know that another park was open to bikes. There was a good turnout of riders from all over Ohio, Kentucky, Michigan and Illinois. I saw all these BMXer’s that I had never seen before and some of them were really killing it, but to me, the standout was this kid who was absolutely destroying our mid-ramp. The ramp itself was 7 foot tall, but this kid was blasting well over 8 feet out, going way higher than anyone else. I had never seen anyone in person ride with that kind of boost. So, i go up on the deck to see more. What i find is this kid in a Shelter (Krishna Hardcore band) shirt who is just smiling ear to ear. I literally don’t think that he stopped smiling all day long, even while taking his runs. His riding was simple, but powerful. He wasn’t fixated on whatever the newest technical lip trick was, he was all about blasting. I was instantly a fan. A couple of years go by and Pat gets put on Schwinn. Right around this same time I had a shitty little t-shirt company called Scum clothing and Pat was one of the guys who i was stoked to hook up with shirts. Pat was freestyle through and through, heavy ass bike, front brakes, bars really far forward and let’s not forget the leopard print knee pads. And the best part was that he didn’t give a fuck what anyone thought about him. I feel like Pat is one of the few guys that has accomplished a lot on his bike, but doesn’t have the ego that usually comes with those kinds of accomplishments. He’s shared a deck with some of Freestyle’s greatest names..Hoffman, Mirra, Miron and McCoy…and definitely held his own. In today’s world of BMX clones, it’s good to see the occasional videos or pictures of Pat doing what he does best, blasting and just loving bike riding. It reminds me that there are guys still out there doing things their own way. The way BMX should be.
And oh yeah, I blame Pat for my guilty pleasure of listening to that Krishna band, Shelter. Cheers Pat!
-Stew Johnson 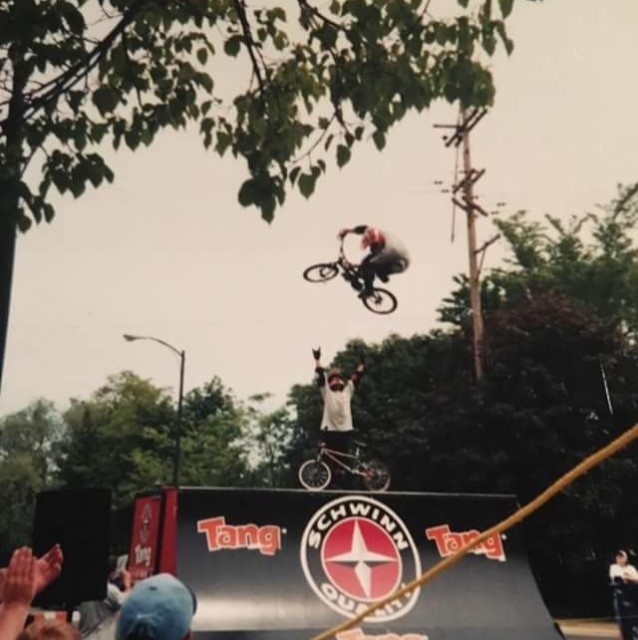 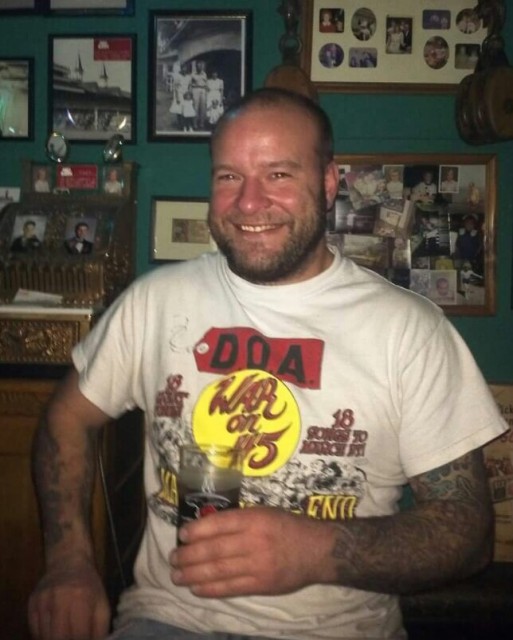 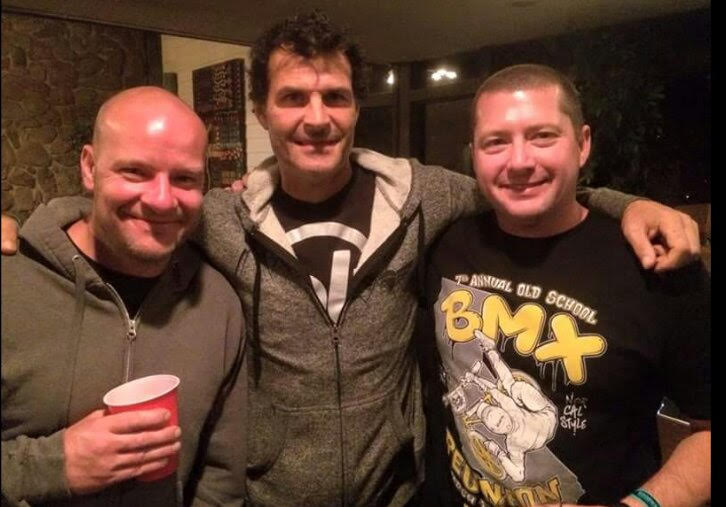 Let’s start off with how you got started riding.

Well, I got my first real freestyle bike around ’86 which was a Skyway Street Styler..The puke green colored one..Rember those?

Oh yeah, I remember those nightmares.

Haha!..I got one of those and learned some basic flatland moves and raced for about a year in ’87.

You raced the Street Styler? 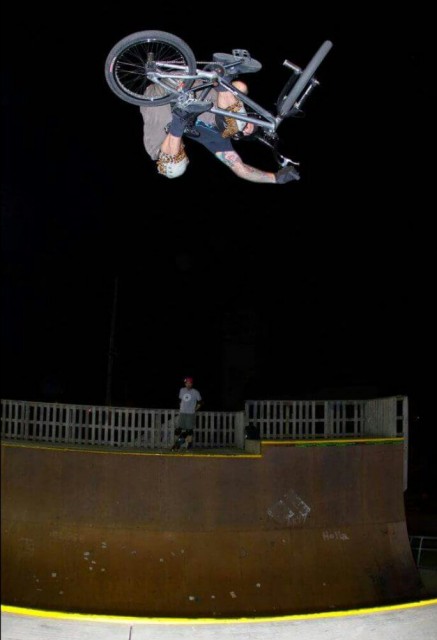 Oh yeah, I raced the hell out that thing…Then in ’88 I saw a Haro show here in Louisville with Mat Hoffman, Joe Gruttola, and Rick Moliterno..I met some more local kids there who rode and started riding a lot more.

Awesome..How’d you get started riding vert?

Kevin Dana, a guy who used to live here in Louisville was the local “vert dude” back then and he helped me build my first quarter pipe..It was 8 1/2 feet tall..That was in ’88.

Who else were you riding with at that time? 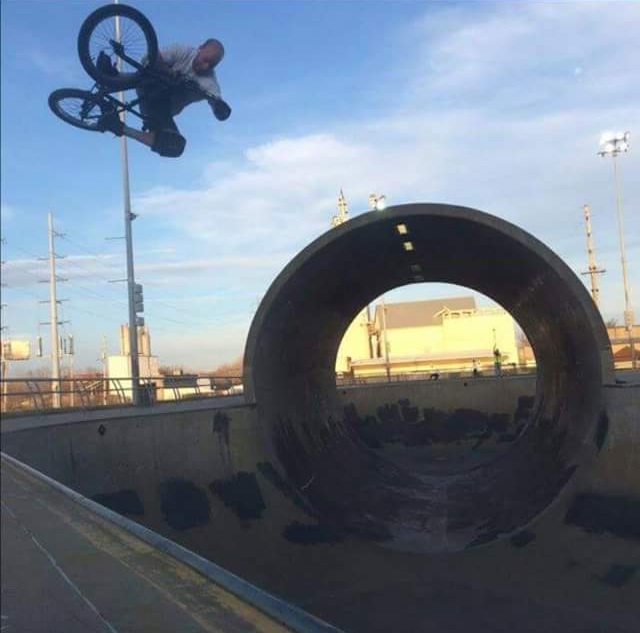 Did you go to AFA comps back in the day?

I did..I crashed really hard at my very first one and was in a semi-coma for three days..In and out of consciousness.

I did an air on one of those piece of shit 8’x8′ quarter pipes they used to use and totally missed the ramp when I landed..Went straight to my face..I was wearing an open faced helmet..I went into convulsions and shit.

Yeah, it was really bad..My parents were freaked out, it was my first contest and they weren’t too stoked..They were like, maybe BMX isn’t so great..haha!..It happened on a Friday and I didn’t totally wake up until Monday.

How old were you?

Damn…You have been sponsored by a lot of companies, what was your very first sponsor? And tell me how that came about.

I was riding at a contest in Missouri and there was a BMX mail order company back then called Stylin’ that was sponsoring it..After the comp they asked me to ride for ’em.

There big thing was making 95 spoke wheel sets..They were called “Manly Wheels” or some ridiculous shit.

Yeah, it’s not like bikes didn’t weigh enough back then.

Haha!..What bike were you riding during this time period?

Super awesome geometry, but they always cracked right around where the seat tube met the frame stand.

That’s true..What was your first full on factory bike sponsor and what year did you get picked up. 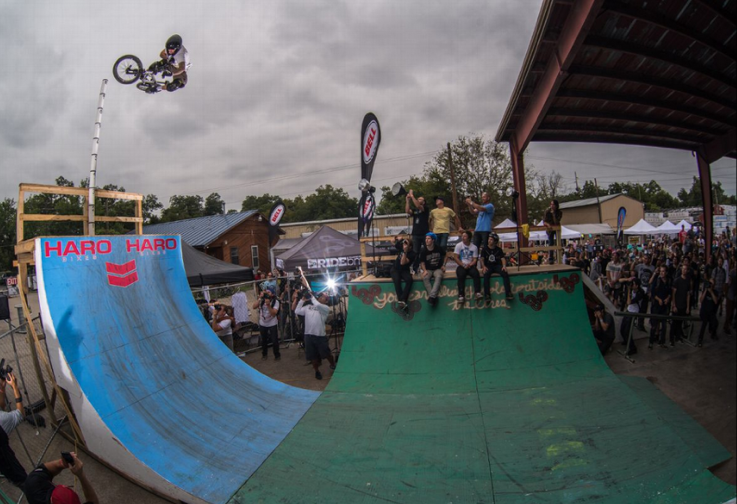 How did that come about?

Jay Miron and Dave Mirra were doing GT shows at the Kentucky state fair in Louisville on that old fold out half pipe GT used to use..Jay hung back wheel, ripped the headtube off his bike and got hurt pretty bad..They had seen me ride at some contests and knew I could ride pretty good..Ron Haro,who was announcing and kind of the team manager, got ahold of my phone number somehow and called me and asked if I’d help finish out the shows..I didn’t actually get fully sponsored by them until about a year later when Woody Itson took over the team..I got sponsored and I moved out to California a few months later.

How long did you live out there?

About 8 months, then I tore the ligaments in my knee and moved back home to rehab it..I moved back about 6 months later. 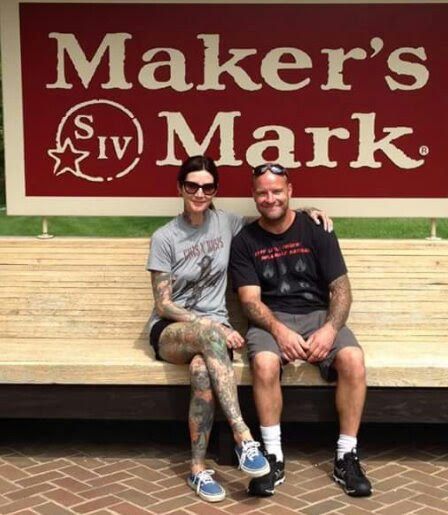 You got sponsored by Schwinn not too long after that didn’t you?

Yep..I was hanging out a lot with Jay Miron at the time at contests and stuff and Schwinn brought him on board to kinda run their BMX program..I was pretty much over GT by then, so it worked out perfect.

You moved here to Austin right around this time..When You first got on Schwinn.

Yep, it was right around that time.

Oh, man..We raised all kinds of Hell when you lived here.

Haha!..Jesus Christ, those were some wild times..Talk a little bit about your Austin days.

Well, when I first moved there I met all you guys and Gute (Kevin Gutierez) was still riding a lot of vert. We used to ride the vert ramp at Noodles (Greg Tait’s) house when he, Sheps and Tim Bailey all lived together, before the city told them to tear it down.

Then it got re-built at Patty Arredondo ‘s house.

Yep..Sooo many fun times at her house riding vert and partying..Remember when you got super duper whiskey drunk and dropped in sitting in a wheelbarrow?

Haha!..How could I forget?..I made it all the way down the transition, across the flat bottom and up the other side before I flipped over backwards.

Remember when me, you and Sheps stayed up for a full 24 hours drinking at your house on 45th street and I sucker punched you and you choked me unconcious?..Haha!

Oh, man..I felt bad about that.

You shouldn’t, because I totally deserved it!

Haha!..Remember when we were all at the Ritz getting shit faced as usual and Gutierez lit a match and dropped it in Tommy Mejia’s tip jar and set it on fire?

Hahaha!..I had forgot about that one!..Jesus Christ, They put up with a lot of shit from us at the Ritz..The staff there was incredibly tolerant with us..We could get away with murder in that joint..That’s back when Benny was the general manager and Ian Burrows, Tommy Mejia, Jasper Benson (RIP), Athene Cass and Michelle Manx worked there..God bless them all for putting up with our drunken foolishness…During your Schwinn days, you went on the Lolapallooza music fest tour doing vert demos on the portable half pipe they had..Talk a little bit about that.

Oh, man..That was amazing..full rockstar treatment..We (BMXers and Skaters) had our own tour bus, stayed in nice hotels and shit..It was a really, really awesome summer.

I’ve known Miller forever..I remember before I started riding street, I saw him doing wallrides off a quarter pipe that had been cut in half and he was just blasting up the wall..I thought to myself “I gotta start doing shit like that”..He really motivated me to always go faster and higher at everything..Seeing him blast on a vert ramp and spin 900’s was always good..Him and I being both from Louisville, we have ridden, drank, and seen tons of killer punk shows together..One show that stands out is when we saw Agent Orange at a club on Bardstown road and afterward we climbed our drunken asses up a fire escape to the top of a building and were heckling people and throwing garbage at them, haha!..Killer Miller was, and still is, always down to rage..Very proud to call him a friend..Great dude.
-Mike Lausman

Nice..You rode for Redline after Schwinn..How did that come about?

Mark Losey actually hooked me up with that gig.

Yep..I only rode for Redline for a year..There really wasn’t really much to it..The flew me to some contests and shit..They did make a really cool poster of me..haha!

I remember that poster, it was killer…Fuck, I’m running out of battery power, lets wrap this puppy up..You have traveled to al lot of cool places all over the world..What were some of your favorite places that you got to go to?

Let’s see..I’ve always been into martial arts, so getting to travel around Asia was really awesome..China was really cool, nothing at all like what I expected..The people were very hospitable.

Didn’t you cut yourself jumping over a fence there when you were drunk and it got infected and shit?

No, that was in Thailand..Let’s just say the medical care there left a lot to be desired.

Well, I think that about does it..Thanks for doing this interview Pat, it’s been a lot of fun..You have always been one of my favorite riders and friends..Cheers!