RIDER CUP 1992 – SPITAFIELDS LONDON
One weekend whilst visiting relatives in London I saw and picked up an issue of INVERT BMX magazine (with Simon Tabron on the cover front flipping out of a bowl to his feet) which, among other things told me of their upcoming change of name to Ride (UK). When I later got that first issue of Ride I saw my first pictures of concrete bowls in my neighbouring town (that I would virtually live at for years), Chad Herrington, a Rider Cup article and a small advert for a video that covered it. I was pretty annoyed reading the Rider Cup report as it appeared the weekend I had earlier been in London also happened to be the same weekend as the comp. I decided to order the video to see what I’d missed.

By Dan Kidd
CHECK OUT MORE >>

I had started riding in early 1992 but before that I skated a little and had watched the skate video’s Public Domain by Powell and Peralta as well as bits of Streets on Fire by Santa Cruz. My only exposure to any BMX coverage at that point were old issues of R.A.D skateboard mag which had the odd page for BMX, those INVERT and RIDE mags and then a little later that year an ‘extreme’ sports programme called High 5 which did a Hoffman crew special (Check it out here).

The video took ages to arrive (early 93ish) and I was in for a bit of a shock. The video is a TV show style documentary complete with a RADA trained professional UK kids TV actor ‘host’ and what’s best described as ‘interesting’ music, commentary and format. As well as the vert and ‘street’ BMX comp, it includes skateboarding from the comp, flatland, interviews (pretty funny) with US and UK riders/skaters, some ropey snowboarding, BMX King of Dirt, random euro vert skating and synchronised rollerblading.

My friend received a copy of Homeless Trash around the same time and comparing this to Homeless Trash meant that the video went in a box and stayed there for a long time.

It’s an interesting watch now however with a lot of major BMX vert and flat riders for the time and some good guess the rider/bike moments especially as there aren’t any name titles with the footage. Colin Bennett the host seems to have a good sense of humour too telling Tabron how to deal with having his bike stolen. 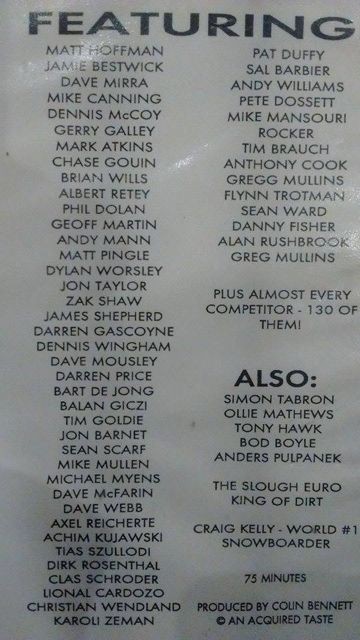 Random info – apparently the street skaters hated the course (according to a skate mag comp review I read at the time, Rare Unit ramps were crap to skate) and threw bottles of piss at the organisers which you can sort of see at the prize giving near the end.
When I went to the concrete bowls I had seen in that first Ride issue I met two riders (who are still friends now) who had won tickets from that INVERT magazine to go watch the Rider Cup for free.
Enjoy!