While searching through my important-BMX-documents folder in July of 2015 searching for the letter from Perry Kramer on SE Racing letterhead for a previous Artefacts column, I located this self-serving piece of history: 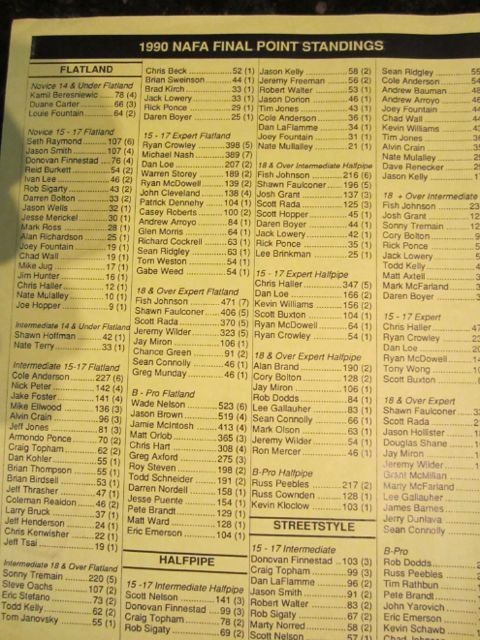 NAFA was the “North American Freestyle Association”, an organization based in Tigard, Oregon and run by the Lucas brothers (Dave and Rich). It primarily served the riders of the Pacific Northwest region – so Northern California, Oregon, Washington, Idaho, British Columbia and Alberta. Events were mostly held in Oregon, Washington and British Columbia between 1988 and 1991.

Let’s get the self-serving part out of the way. Here’s a closeup: 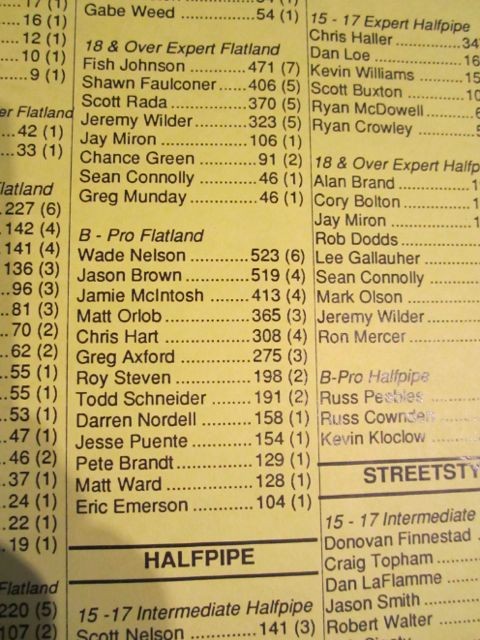 I saved this piece of paper, which would have been sent to me in the mail late in 1990, because it is the one that implies that I was the top B-Pro Flatland rider that year. And when you look at the names of all the (better) riders under my name, this seems impressive. But not all, in fact, is as it seems.

First of all, this was not the FINAL Final Standings for the year. There was one more event. So misleading. A showdown was still to come for the overall title. Second, what is not obvious, despite subtle evidence, is that I competed as an expert for the first half of the year (and won three of five events), and the Lucas Bros. credited me all of those points for my B-Pro overall standings. That is, the (6) beside my 523 points also means that I had competed six times that year, whereas Jason Brown had earned his 519 points in just four events.

So what happened at the finals? It indeed came down to JB and myself. My memory is that the MC announced placings of all the B-Pros in reverse order, and that Todd Schneider, Jamie McIntosh, and maybe Greg Axford placed lower than us. As the third place result was announced at the end of the competition, JB and I knew that there were just the top two spots left, and that we were the only two riders remaining. I think that we even looked at each other right in the face smiling while second place was about to be announced. Of course, I got second, JB got first, and this yellow sheet is as close as I ever got to being any sort of Pro flatland champ. To be clear, and this isn’t modesty, every rider on the list was better than I. I was just better at contests than many (never better than Jason, however), and had an unfair advantage of competing as an expert for half the year.

But more importantly, perhaps, let’s look at the other names on this sheet. (One last self-serving note – my late brother Scott on top of the 15 – 17 Intermediate Halfpipe class!)

Matt Orlob could do fakie wall rides on ceiling-supporting columns in the venues where the contests were held. And killed it in flatland. On a Quadangle?

Rob Sigaty and Darren Bolton! Two dear friends of mine to this day. I’m going to do an entire column on Sigaty soon.

Eric Stephano (now at TIP Plus)! Darren Boyer! Ryan “Chicken” McDowell! Andrew Arroyo! Gabe Weed! (It is clear that a handful of Californians made one trip to check NAFA out).

My dear, late friend Ryan Crowley of Spokane, Washington (more on him in my upcoming coaster brake stories). RIP

Fish Johnson! A legitimate boss in the expert flatland class. And our friend Shawn Faulconer, who I remember fondly as a principal competitor before I made the jump to Pro. Jeremy Wilder! Who might actually find this posting – and who once wrote a letter to NAFA which was published in their newsletter that was very kind to me. Also, Jeremy rode a Woody Itson Diamond Back, as I remember, so that ruled.

18 and Over Expert Halfpipe is full of big names, including a Beast. Alan Brand was a king back then in the region, and may have been riding a Trick Star with a bashguard (see Bashgoose column). Corey Bolton is another one of everybody’s favourite humans – first non-Pro to backflip a couple years later. Rob Dodds was one of the first Canadian Pros I met at my first contest in Victoria in August of 1987, and was always dialed. I also met Ron Mercer that day, and Ron still rides every day at his Woodyard in Vancouver. Jason Hollister, another (along with Alan Brand) Canadian Pro that I met that day in 1987, ended up being my roommate in 1997.

Russ Peebles from Cranbrook, BC! And his buddy Scott Buxton one column over! And Sean Ridgley!

Grant McMillan is well known to us old-timers from Western Canada. Marty McFarland! And look at all those Pro flatlanders in the B-Pro Streetstyle standings: Chad Johnson, Eric Emerson, Pete Brandt.

Look how many of the classes were filled with flatlanders! This was the start of the “Streetstyle” era, so these classes are also listed, but old-school folks will remember that to be a freestyler in the mid- to late-1980s was to be a flatlander. Well, most of the time. Also notice that the classes were divided into age groups and skill levels – not merely amateur and Pro classes. And that the highest age group was 18 and over, because riding past 18 was still kinda new.

Maybe this was just fun for me. 1990 was two years after the crash in the BMX market, and this felt like everybody who freestyled in the Northwest and Western Canada. Contests were family get-togethers. Alas, I believe that there was only one more NAFA contest after the finals in 1990 (Held in Yakima, Washington in 1991). Mat Hoffman’s BS Series would begin in Texas early in 1992, and for a handful of us able to travel to Texas and other places outside the Pacific Northwest, a new family awaited.