I’m excited to introduce one of my freestyle buddies Wade Nelson and his new monthly article called Wadeaminute. Wade has deep roots in BMX and even more in the Canadian BMX scene. So sit back and enjoy some of the stories Wade will bringing our way! 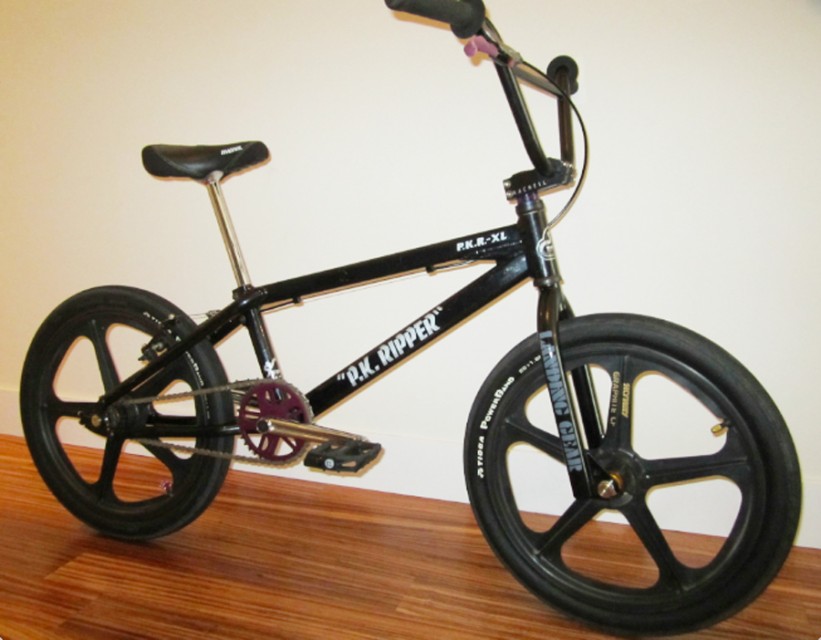 The recent passing of Scot Briethaupt got me thinking about my PK Ripper. And it occurs to me that explaining this bike involves a whole bunch of name-dropping, which, while frowned upon, still kinda makes me proud of the friendships that I’ve built over the last 35 years of BMXing.

In the summer of 1984, my mom was to come into some money and my brother and I were to get better BMX bikes (worth about $300). My poor brother broke his previous bike in half a few months earlier and had to settle for a Norco (an inexpensive Canadian brand). I could wait, and had the new Hutch Pro Raider picked out – the Taiwanese version of the chromest bikes of the 1980s. When we got to the closest and best BMX shop in the Vancouver, B.C. area, Local Motion, they had just taken a used PK Ripper custom bike in on trade. So I got a full-meal-deal dream bike. And then it got stolen a few months later. 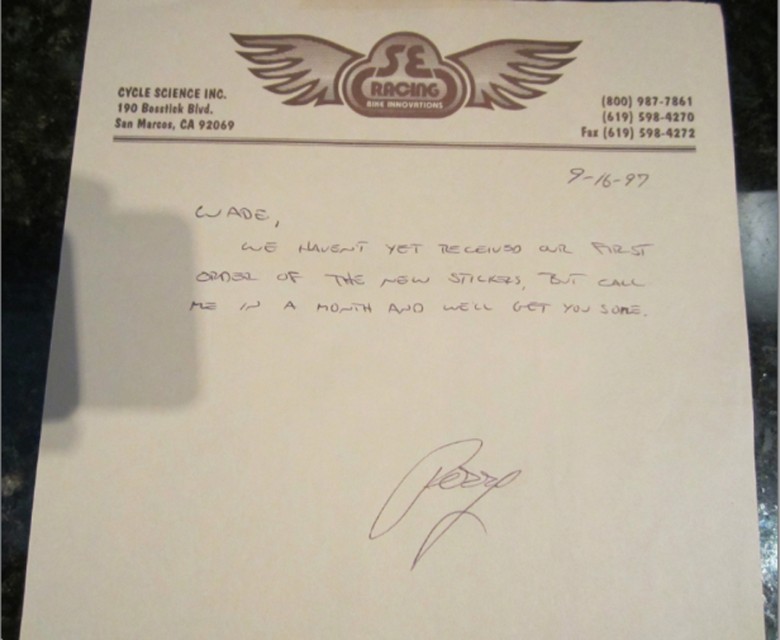 In 1996, I was announcing for and sometimes riding for The Northeast Trickstars out of New Hampshire. Mostly this would be with my good friend Pedro dos Santos, Aaron, and Chris Poulos, but sometimes with Josh Heino. The Trickstars were sponsored by SE Racing, so Pedro and I ended up with matching red 1996-ish PK Rippers. Wicked.
When I moved back to Vancouver in 1997, I decided I wanted to strip the paint and polish it. This was too difficult for my patience, so Cec Milligan at Basic Bikes got the frame powdercoated black by Rocky Mountain Bicycles. Of course, now I had no decals. I went to Interbike that next year for SST and Brian Scura, and while I was there got to meet Perry Kramer himself while he was working for SE Racing. He promised me a sticker pack, and sure enough, within a few weeks I got a full set of fresh decals and a hand-written note from PK on SE Racing letterhead. Amazing. 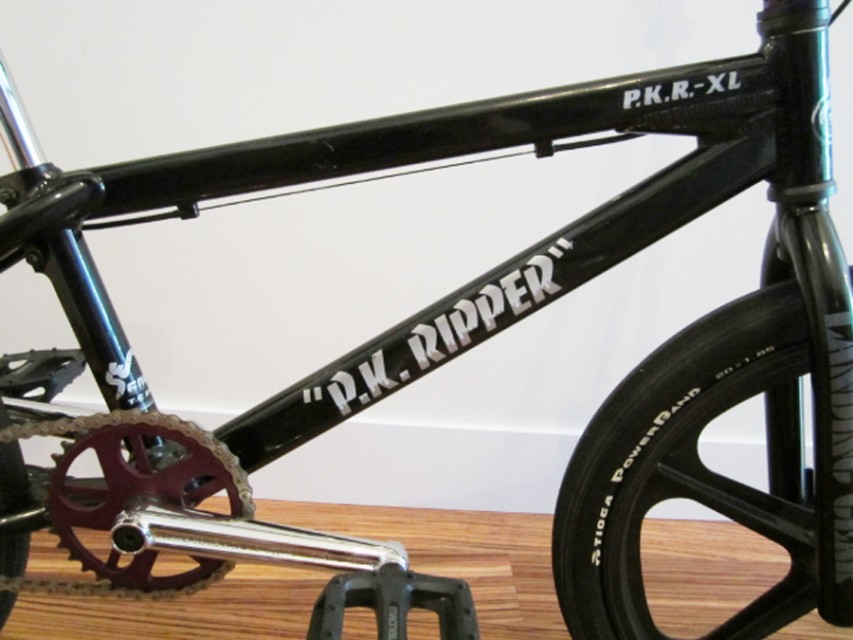 At some point in the early 2000s, my friend and Vancouver legend Darren Wong told me that he had always wanted a PK, so I gave him mine. Six or seven years later he was done with it and re-gifted it back to me.

The frame sat on bookshelves and trophy shelves for a few years, and then I realized that I had graphite Tuff Wheels and a PK Ripper frame that were just being stored. The bike had to be built again.

The frame was originally built for 1” threaded forks, but I had it machined out in the late 1990s for 1 1/8” forks. The frame still had the cups that David Osato gave me back then that went twice as deep as normal cups. I emailed my friend Aaron Huff at Solid, explained the project, and he donated a Solid Headset. Aaron rules.

The graphite Tuffs are modern ones. I got the front one when I bought myself a set of flip-flop ones in 2006 as a graduation gift for myself. A few years later I ran into Ron Wilkerson at Steve Swope’s Old School Reunion at Woodward West, and he agreed to sell me a set from one of his 25th Anniversary 2Hip Pork bikes. The rear has a cassette hub that uses the same parts as Odyssey hubs from a few years back. I rebuilt them both with female axles and gold titanium bolts. So tricked out – and I would bet the only set like this. It also has Blue Six titanium stembolts and brake shoe nuts in gold. To hold the rear wheel in place, I’ve installed a Profile chain tensioner that came directly from Matt Coplon.

Most of the rest of the parts are from Darcy and Jamie from MacNeil, including two samples that otherwise don’t exist that help a 1996 PK Ripper frame work with modern parts– a long, chromoly, chrome-plated 22.2 Pivotal post, and a 36t spline drive purple MacNeil Lambo sprocket (the frame won’t take anything smaller than 36/13 gearing). Even the forks are from MacNeil – although they have Landing Gear Stickers on them.
The final touch is the valvecaps – a purple dice-cap on the rear and a yellow anodized front that I’ve had since at least 1990. I’m solid on this date because Jamie McIntosh and I once did a flatland demo on the radio (???), and the radio guy asks me about the valve caps.

So, while I never got the chance to meet Scot Briethaupt, I did get to ride two of his American-made PK Rippers, meet the frame’s namesake, and meet a whole bunch of name-drop-able friends over the years because of his significant contributions to BMX culture. So I’m glad he was around.

Postscript: in the week since I first wrote this, my commuter bike was stolen (making my PK my commuter bike for the next six weeks or so). This is only the third bike that I’ve had stolen, and the first in thirty years (the third bike was a Hutch Pro Racer with Z-Rims). This unfortunate event gives me a chance to drop one more name that has helped me out a bunch over the years but has no parts on the PK – as Zack Phillips at Kink had supplied the stem for that bike (Zack also connected me with my chrome Kink Farside Frame and Badger Bars for my bike with lavender Tuffs with coaster brake…).