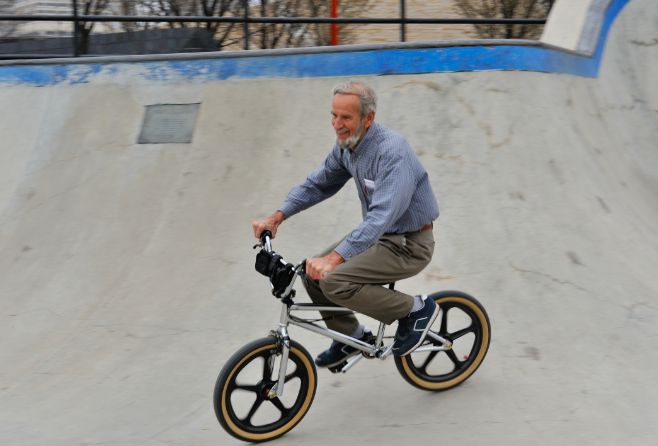 Above and below are pictures of an seventy-year-old man named Henry riding one of my bikes around The Forks skateboard park a few years back. The park is located at the centre of Winnipeg, Manitoba, Canada where the Red and Assiniboine rivers meet. It is a popular destination for tourists, and we get a lot of folks coming by to watch the users of the park bust out. Henry and his partner of many years were such a pair of curious folk.

My memory is that they were retired German Mennonite farmers that had made a trip into the big city. Henry approached me, although it may have been the reverse, and told me that he was quite the cyclist in his youth many decades ago. He seemed so happy to see freestyle BMX – maybe for the first time. After about ten minutes of friendly chatting (I do enjoy time with elders), I asked him if he wanted to try. His eyes lit up. I asked his wife if he was allowed to. She wasn’t psyched on the idea, but gave her reluctant permission. I figured that I would meet him in the bowl – that I would drop in, and that the others might help him get down. By the time I dropped in and skidded to a stop, he was already right beside me, having dropped in on his feet in the five-foot bowl like a teenager.

My god he was happy to carve around. It wasn’t scary to watch – just blissful! One of my favourite times at the skatepark, ever. Everybody just stopped and let him have the park for about five minutes. 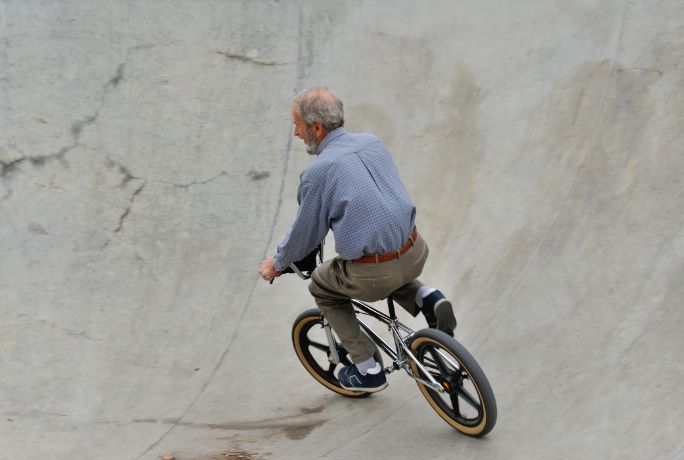 This entry was posted in Stories, Uncategorized and tagged Dr. Wade Nelson, wadeaminute. Bookmark the permalink.