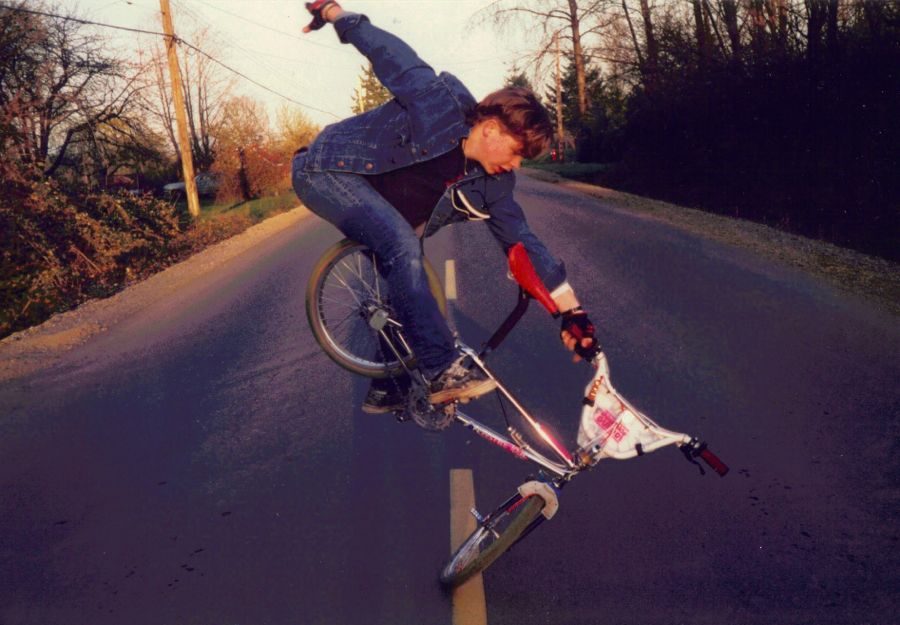 This picture was taken in 1986 on the street in front of my rural childhood home in Langley, British Columbia, Canada. Our driveway was not paved, so this was the closest flatlanding spot to where I lived. I am not sure who took the picture – likely my brother or mother. I was fifteen years old, and had owned a BMX bike for six years at this point. This GT Mach One with replacement GT Pro Freestyle Tour decals was the sixth BMX bike I had owned. It was preceded by a Raleigh Tracker (Christmas 1980), a Raleigh SuperCross, a PK Ripper (stolen), a black Hutch Pro Racer (stolen), and a 1985 neon green Haro Master.

I had been a freestyler for three years at this point, having had one of the first Potts Mod kits from ACS on my Hutch, and a Redline Forklifter stem on my Master. And Skyway aluminum pegs since they were released. Why would I switch to a race frame?

My memory, and I guess that I was a bit ahead on this, is that I wanted a chrome frame, did not want the rear standers that got in the way of the three inch pegs, and was already over top tube platforms.

Now have a look at the bike: it has not only a fork guard to protect my Hawaiian Vans from the evil centre-mount MX1000 brake’s bolt, but also guards that I made to protect my shoes / feet from the pronounced chainstays and seatstays at the rear dropouts. Where did I get the plastic for these latter guards? From the trimmings of my Dyno UL number plate that seemed so important to run on my freestyle bike in 1986.

The number plate is trimmed to fit second generation Skyway freestyle bars, with double crossbars for a standing surface (surfers at this point, and not bar rides). And those are black and red ODI Mushroom II grips. And I think Odyssey RX5 brake levers (locking, of course). And what must have been my first Odyssey Gyro (notice that I am running a home-made gyro cable splitter, too, way before a Primo Pervert ten or so years later).

I seem to be running only three pegs at this point – a blue Skyway and a pair of GT tube rides (steel, so less of a chance to strip them out). All three were thread-on. I remember stripping out Skyway pegs when first installing them. I also remember snapping the cable end off the first Gyro that I installed, before even riding it, while adjusting the brakes.

Notice that the seat and bars line up nicely when in bar endo mode. This was of course the “rule of thumb”, an essential part of bike set up at the time. Also check out the tape on the nose of the Kashimax seat, and the 10 speed bar foam covering the blue layback GT seatpost. And the black and pink griptape on the top tube. So custom. So impractically practical.

My memory is that that set of Peregine 48s was the first set in Canada. They aren’t chromed or sealed – that would come later. But they were way stiffer than the 36 spoke Mike Buff white Z-Rims / wheels that I had previously. No flex on this bar endo! And green Comp ST tires (which made more aesthetic sense when they were mounted on the Haro), and a Garfield pencil topper jammed on the front valve stem.

The cranks are Redline 400 Series that came stock on the Haro Master, although I am pretty sure that I got them from my high school friend Oliver who was already over BMX by 15 years old. He had a Kuwahara Lazer Lite, and allowed me to trade my one-piece cranks for the nicer ones on his bike. That sprocket, a 40 tooth, I believe, was originally blue, but I stripped the anodizing off with oven cleaner.

Then there is the outfit: jeans and matching denim jean-jacket, a Tony Hawk t-shirt (was already skating by this time), the aforementioned floral Vans, and a pair of fingerless 10 speed gloves. And that growing-out, undercut preppy hairdo. And, the piece de resistance, the original Oakley Factory Pilot sunglasses (on a string, not even being worn).

This entry was posted in Articles and tagged 1986, denim, Dr. Wade Nelson, wadeaminute. Bookmark the permalink.

2 Responses to Wadeaminute // Denim and Chrome