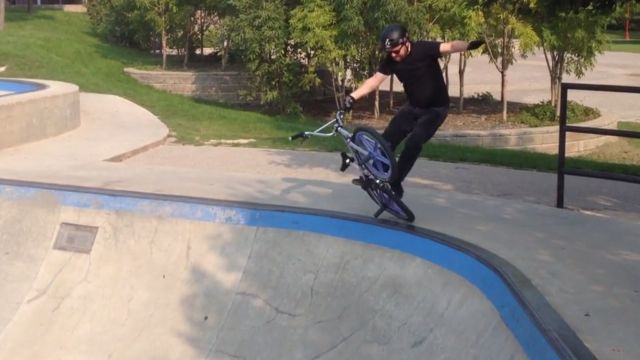 One of the most interesting BMX experiences that I’ve had in the past 35 years of BMXing happened at the end of the summer of 2015. Indeed, I never would have thought that I would get any further BMX media coverage at 44 years old.

The whole thing started as a bit of a joke, but also with a certain amount of genuine respect being thrown my way. Local Winnipeg, Manitoba, Canada pro Shawn Franz (MacNeil) approached me at the excellent Forks skatepark one night and described a video contest that was being run by Northern Embassy (which I am pretty sure is run by my old friend Jeremy Deme). Shawn explained that the contest was called “Five Clip Fever,” and that the entrants were to submit their best five tricks edited together by the end of August.

Misunderstanding his intention, I assured him that I was sure that he was going to win. What I didn’t comprehend, but that he subsequently made clear, was that he wanted to film five of MY clips for the video. I am pretty sure that he meant this as a sign of respect, because he is a very genuine fellow and seems to be free of any of the distancing irony or smart-assedness that colours my life. I, on the other hand, thought it was a pretty cheeky thing to do – enter an amateur street contest aimed at teenagers as an ex-pro 44-year-old skatepark rider. So I was in without much convincing.

As I thought about it, I realized that I did not actually do much anymore that was film-worthy on my modern pegless, one brake MacNeil BMX. That is, I basically had nothing to offer. Frustrated, I remembered my old school flatland set-up: a chrome Kink frame with mostly MacNeil parts, that has four pegs, front and rear hand brakes, a detangler, and coaster-brake Tuff Wheels. 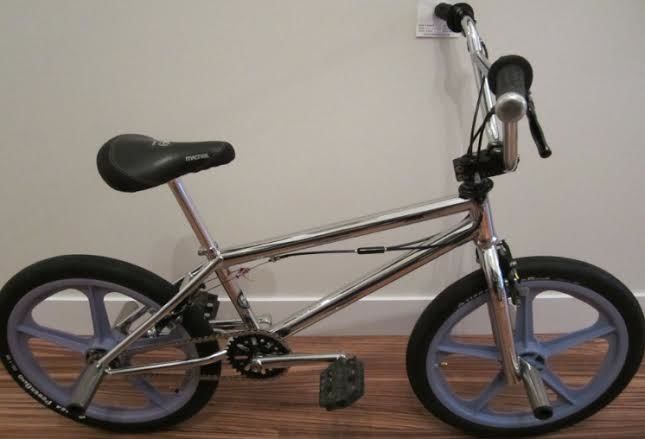 The initial plan was to shoot the whole video (five clips) in one quick session. I arranged to meet Shawn at The Forks and promised to fire off a 540 tailtap to abubaca to gay twist (it is not really a full cab if I am using my arms, is it?). I had never done all three in a row before, but got this done in about ten minutes. As you can see, this was done on my modern bike – a 20.3 lb MacNeil with no pegs, a cassette hub, and just a rear brake without a detangler (basically, a trails bike).

I then sprinted home to switch bikes and we tried a few tricks at the same spot before aborting so that I could meet someone for dinner. After dinner, Shawn and I met in the backyard of a bunch of BMX folk on Furby Street to get the two spine tricks. The second clip in the video should have been pulled in the first few tries (especially as it is a trick I could do in 1995), but it took about 30 minutes to get it done – a 360 tailtap barspin to one-footer. The owner of the home, Joel, got the second slo-mo angle. Everybody was psyched.

Shawn asked me what was next, and I honestly didn’t know. I figured that I would do a tailtap over the spine, locking the coaster brake, and then see what happened. What you see in the video as the third trick was an almost-accidental four single-barspin tailtap(s) over the spine (not exactly a quadruple barspin tailtap). You can hear Shawn laugh at my trick as I ride away – the proper reaction to be sure. To be honest, I am both embarrassed of this trick and psyched that Shawn laughed – as while there is a part of me that still wants to be good at this stuff, there is also the part that realizes maybe mere entertainment is what I have to offer.

After a bit of flatland in the backyard that included a Nourie Stand to Cherrypicker, we agreed to call it a night.

One week later, Shawn and I met to get the fourth and fifth tricks documented. The fourth was a trick that I pulled in 2010 for the Ride BMX cameras at the Old School BMX Reunion event at Woodward West – a barspin rocket flyout to peg manual to lawnmower before dropping back in. I hadn’t pulled it in over five years (hadn’t tried it, either), but it came in ten minutes or so. Last time it was done on a cassette hub, so the coaster brake is not really a factor – I just did it on the bike that I own that currently has pegs.

Shawn asked what I wanted to do for the last trick, and I took him over to the street plaza section of the park. It occurred to me that I could fake out the audience and ride toward a rail and a flight of stairs only to swerve at the last second, pull into a pedal picker, and hop down the stairs. I shit you not – this was pulled first try. It just never occurred to me that I could not do it. My inner thighs took a beating and were bruised for a week or so, so I can’t imagine how bad it would have been if I had to try it ten or more times.

When we were done the last trick (and we only shot five tricks for the contest), Shawn asked if we could shoot some B-roll. I suggested flatland, as I had just pedal-pickered my way down a flight of stairs and was feeling pretty dialed. My memory is that the tricks you see after the one slide of credits in the video were all shot first try. I personally would have taken the one out that goes nowhere – the swivel-ish looking one that looks like I am going to pull into a rope-a-roni – but other than that I am pleased with them all. After I pulled the wheelie to Smith decade (the “fajita”), I called it quits and examined my rear Tuff Wheel, as it had made a horrible snapping sound during the lawnmower drop in earlier. Sure enough, and as you see in the video, I had broken all the spokes of my precious lavender coaster brake mag wheel. So we filmed three of the spokes before the battery memory in Shawn’s iPhone was full.

(The whole project was shot with an iPhone, and edited very simply on a Mac laptop – which blows my mind a little after living through the VHS era and watching Jason Brown put together his Canadians, Eh! videos 25 years ago.)

Shawn posted it the next day to Vimeo and let the folks at Northern Embassy know about it. I figured the joke had been sprung.

Then it got a bit weird. Or, rather, things happened that I didn’t expect. I got a bit of a fever.

I sent it to only two people initially – my hero, Woody Itson, and Shad – as I thought that they would dig it. Woody approved, which is so rad if you are still a 14-year old boy in 1985 and Woody Itson is your hero (to be clear, I am that 14-year old boy). Shad liked it so much that he posted it on Snakebite without asking. Whoa.

Slowly this went from a joke thing to a hope for validity / validation. I suddenly wanted people to care and be stoked. I wanted to matter in BMX again.

Four days later, the folks at Northern Embassy posted it along with the news that the contest deadline had passed. They were kind, and I was happy just to have a quick high-five from them – like a special consideration award. 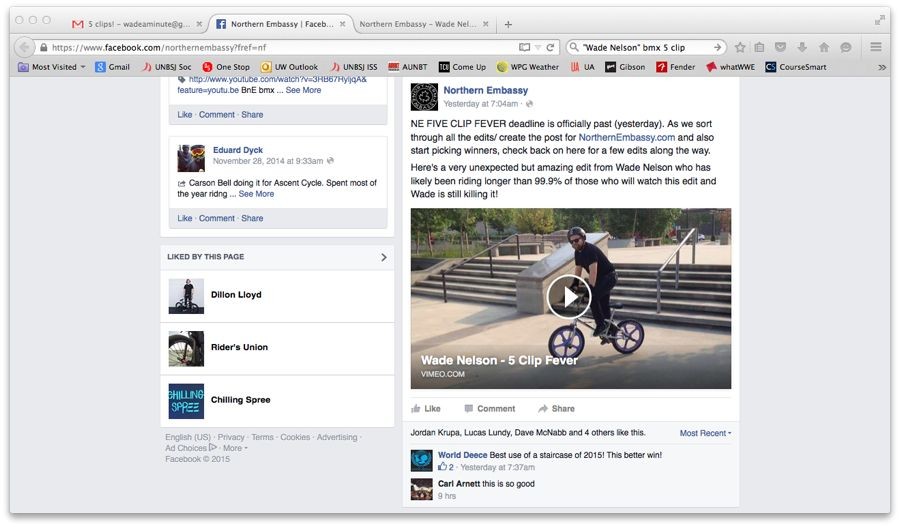 A few days later, they posted again, making it clear that I was not being considered for the contest (and I shouldn’t have been), but once again showing special appreciation. 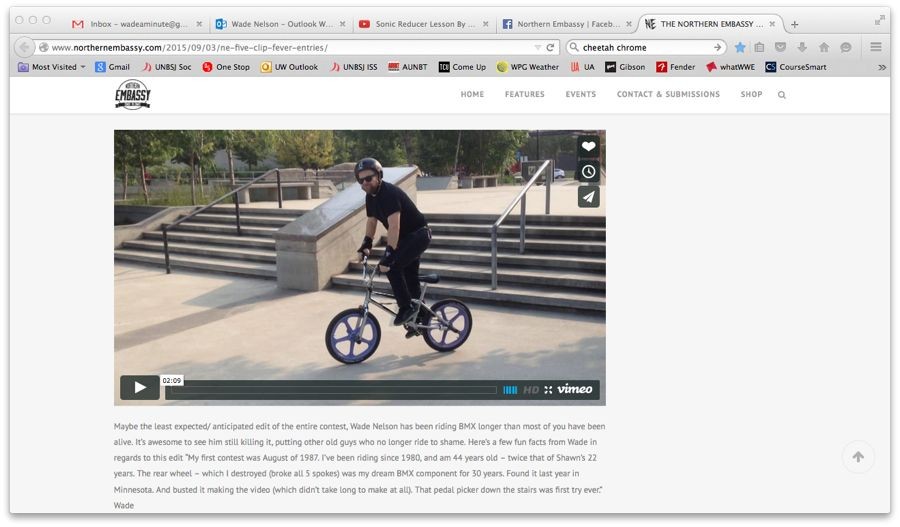 I started checking the views stats on Vimeo. While the other contest entrants were getting between 100 and maybe 500, I was eventually up to 2400. I started googling around and found that it had been posted by many other websites, and that a bunch of my old friends were seeing it and were psyched. It was posted at BMXUnion, Ride BMX, and on BMXMuseum, and Brett Downs of the Plywood Hoods had even posted it on their Facebook page. 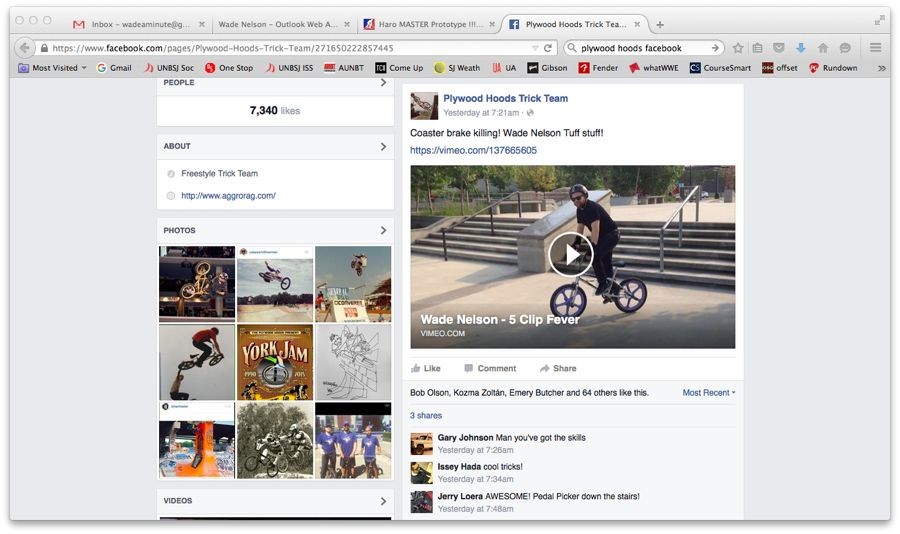 So I got a taste of modern BMX media. And a taste of what it is like to get (fleeting) attention / validation.

I cannot imagine the hustle that the young pros have to go through to keep people’s attention. People were very excited about this for a minute. Maybe two weeks at the most, and then off the first pages of all of the sites, and back into obscurity. I cannot imagine my job being hustling for attention so often. The modern Pro-level hustle seems like a lot of work and a lot of risk for little compensation.

In my case, I didn’t have to try very hard, didn’t risk too much by doing 20 year old tricks, and Shawn did all the work and most of the hustle. I am so appreciative of the opportunity and the experience. The payoff, in a sense, was huge.

So, again, thanks to Shawn Franz and many others for making an older rider feel good for a minute, 20 years past his prime. I just wish I had five more clips for next summer.