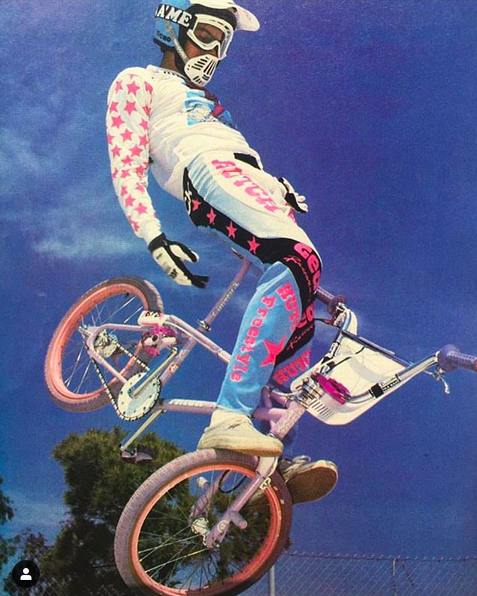 The picture above, from 1985, is my very favourite BMX photo. I will of course acknowledge that my next favourite three – Brian Foster with the scrub table, Dave Vanderspek’s table-top bunnyhop, and Vic Murphy’s table off a curb, are all better pictures – but this shot of Woody Itson is the most resonant to me.

First, when this was first published in 1985, I was fourteen years old. That’s prime hero-worship age, and Woody was my favourite Pro, by far. Mike Buff would have been second, and in 1984, they both rode the new Hutch Trick Star frame.

Woody has been, in the past, the object of derision from people of significant (and obviously earned) stature – notably Mat Hoffman and Chris Moeller. Heroes themselves, clearly. And they have / had their reasons.

But Woody was my Pro. Eventual USA BMX Hall of Fame member, first person to land a 540, “Master of over 100 freestyle tricks” (according to the famous “Ride The New Wave” Hutch advertisement) – just a few of the justifications I could put together.

But the truth is likely a combination of things – a perfect storm for this particular fourteen-year-old.

First – “Hutch” was my nickname that my father gave me in the early 1970s, and as such the Hutch brand stood out to me in the early 1980s when I started to discover BMX companies. I bought a Hutch sew on patch and a Hutch Lil’ Hole Shot sticker pack for my Raleigh Supercross at Local Motion bike shop. At some point, “Rocket” Rich Houseman handed me a Hutch sticker at a race at my home track in Langley, B.C., Canada.

I started buying BMX Action magazine regularly in the summer of 1984, and one of the two main superheroes promoted in the monthly publication was Mike Buff. Buff was riding a new frame – the Hutch Trick Star. Chrome-plated at first, but then Candy Apple Red on the cover of the October BMX Action Trick Team Summer Tour issue. Notably, his bike had the new white Mike Buff signature ACS Z-Rims (white was the new colour for 1984 after many years of just black, silver, blue, red and gold / yellow). Before the end of Buff’s Hutch contract, he could be seen on a pink Trick Star in a California Lite ad.

Early in 1985, readers of Freestylin’ and BMX Action learned that Buff had signed with CW (and that there were lavender Tuff Wheels from Skyway on the new bikes). Woody Itson and Mike Dominguez would be the main team guys for 1985.

I have never gotten over lavender and purple parts.

The picture of Woody, my favourite Pro, features a Purple Reign Hutch Trick Star frame, fork, pedal bodies, and lay-back seatpost, lavender Hutch tires, and a purple anodized stem and pedal cages (the bike should really also have a purple anodized Hutch donut seat clamp, but that would maybe be TOO dialed.)

This is what it was to be “Pro” in 1985. Professional. Sponsored. Covered in logos and obliged to companies. Factory. A BMX racing number plate – on a Freestyle bike, for logo placement.

The BMX media of the day was as complicit as it ever has been in pushing people and brands on the riders / readers. And I was fourteen years old, with just the right amount of enthusiasm and ignorance necessary to have such an image imprinted so very deeply to the core of my BMX experience.