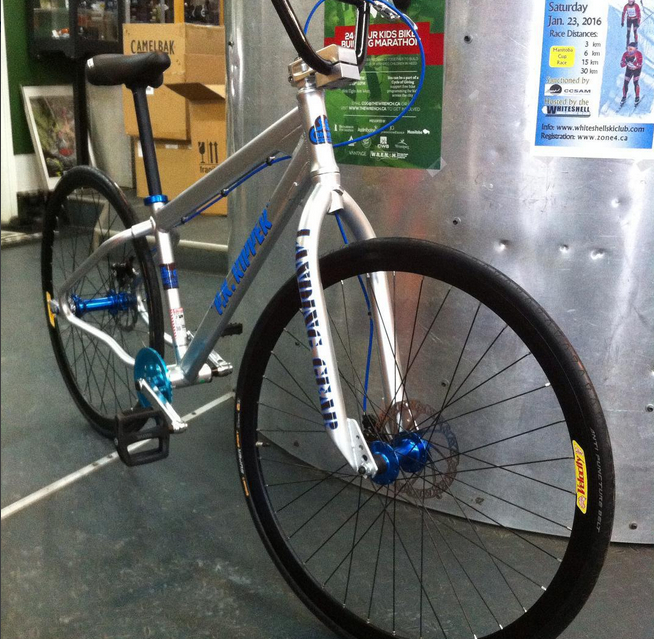 About ten years ago I came up with a new idea for a commuter bike that I called a “tribrid”: A bike that combined the best bits from a BMX, a mountain bike, and a road bike. Essentially, a bike for commuting for a BMXer. This consists of a BMX-style, single-speed mountain bike frame, with mountain bike suspension forks, disc brakes and hubs, 700c road rims and 25mm (one inch) slick tires, and everything else BMX. So, a big BMX bike with fast, efficient road wheels.

I built two of these – one for nice weather with just front brakes (through the stem / forks for barspins), and a winter bike with just rear brakes and fenders. The winter one is still serving me well (the skinny slick tires actually slice through the Canadian snow like pizza cutters), but my main, fair-weather machine was stolen during the summer of 2015.

These bikes had become quite (in)famous. One got me an interview in a Canadian cycling magazine, and the most recent one is featured in a film on cycling in Winnipeg. This latter one was lime green with bubblegum pink rims and gold Profile hubs (thanks, Matt C.).

(*It was locked up inside a locked building, with two locks on it, with a digital camera pointed straight at it. I have the footage (HD) of the guy sneaking /breaking in with a fake moustache at 4am and taking out a cordless angle grinder to slice through the weakest of the locks in under three seconds.)

I needed to replace the bike. I like what Todd Lyons has been up to at SE Bikes, so I checked to see if there was a 700c PK Ripper or Quadangle to work with. I was pleased to come across a prototype of Todd’s new Fat PK Ripper bike. Wait a minute, indeed.

This bike had a few things that I really wanted, with a PK Ripper aesthetic (and I do like PK Rippers): a “floval” aluminum PK frame, with disc-brake Landing Gear forks (I had decided against suspension), that would both take 700c wheels. OK, sure, it is set up for 3.5” fat tires and this might look ridiculous, but I hardly worry about such superficial matters. 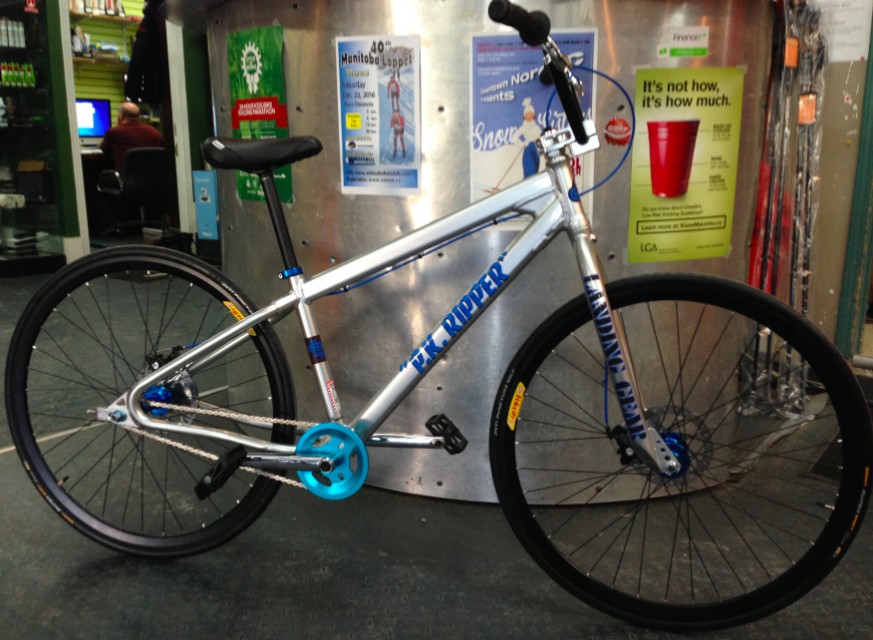 I ordered the bike in the summer, and had to wait until ONE made it to the Canadian distributor in November. My friends at Olympia Cycle and Ski in Winnipeg ordered some extra parts, built me some custom wheels, and we slapped it together in mid-December. And it is pretty rad.

Other than the obvious change of the (Deep-V Velocity) rims and tires, other interesting changes are to a MacNeil Pivotal post and one of their cruiser seats, a MacNeil guard sprocket (purely for a pants guard), MacNeil pedals, a set of prototype 13-butted, drilled, Powerlite-bent bars that are 7” by 24”, MacNeil grips (the ODI Mushroom IIs are too cool to even use!), and a potts-mod compression bolt so I can run the brake cable through the stem.

The bike rides pretty well. I geared it a bit hard, so it is (eventually) fast. The oddest thing, that I will have to get used to, is the height and width of the bottom bracket: it seems a bit low with the wheels I am using, and of course the spindle has to be super wide for the frame / for the fat tires. The handling is a mix of super-responsive, and sluggish. I’ll sort that out.

I think that I’ll take the rear brake off and go with just the front. And maybe a gearing fine-tuning. Other than these minor changes, I am pleased. A fat(-free) bike, road bike, BMX.