Chasing the View off the Cliff // The Lost VHS Tape 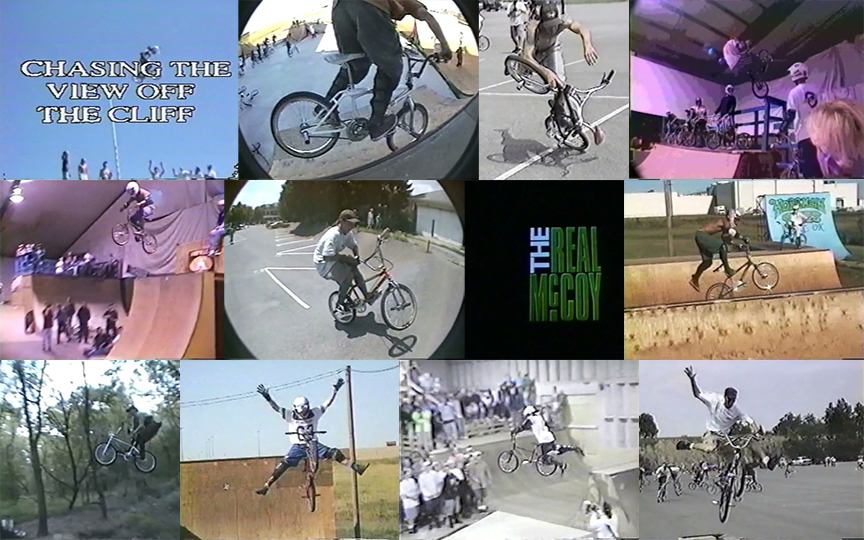 In the early 90s I became privy to two relatively unknown – but nonetheless classic – bike videos that featured heaps of phenomenal riding at Bicycle Stunt Contests, trails, and skate parks on the East Coast.  The first one was called Neat-O Stuff, and some friends and I got to watch it with Mat Hoffman in his living room.  The second one showed up a year later at the offices of HB, and it was called Chasing the View off the Cliff.  Both videos were filmed and edited by a rider named Tony Marion from Lancaster, Pennsylvania.  Lancaster is about 40 miles from York, home-base of the legendary Plywood Hoods and the setting for Mark Eaton’s Dorkin’ video series. However, Tony and his friends managed to capture their own distinct local riding scene.

I’ve often wondered about these two videos.  They stood out for the time and had super-rad footage from the top riders of that era.  But for some reason they weren’t very popular. Most riders I’ve spoken to, including Shad, hadn’t heard of either video.  On a whim I asked Joe Rich, who also grew up in PA, if he had any memory of them.  Of course, Joe remembered Tony and Chasing the View off the Cliff, but hadn’t seen it for years either.  He gave me the extra push I needed to continue with the search in order to bring some light to this lost treasure.

After doing some digging, I was able to get in contact with Tony through his old roommate via Brett Downs.  The internet can be pretty amazing at times; even a buffoon like me can track down almost anyone. Tony and I spoke, and finally I was able to resolve a small mystery that had been on my mind for over 20 years:  Why weren’t these videos more popular, and why had so few mid-school riders seen them?

Tony was down to talk BMX and ended up being a blast to connect with.  He still lives in Lancaster, now a professional film maker and copy editor for DuClaw, a large independent brewery based in Maryland. I began by asking about his roots in BMX. He got started riding at an early age when Ron Wilkerson was freestyle’s top star.

“I rode vert but was pretty bad at it.” (laughter)  “But, my parents still let me put a half-pipe in the backyard.  I just loved it.  When I finally gave up on ever getting good at vert is when I started progressing and having more fun.”

Marion began riding with Steve Younger, and they met another local freestyler, Jeremy Smith, at a neighborhood bike shop.

“Jeremy was a really good rider.  He was the guy from our crew who everyone knew about.” 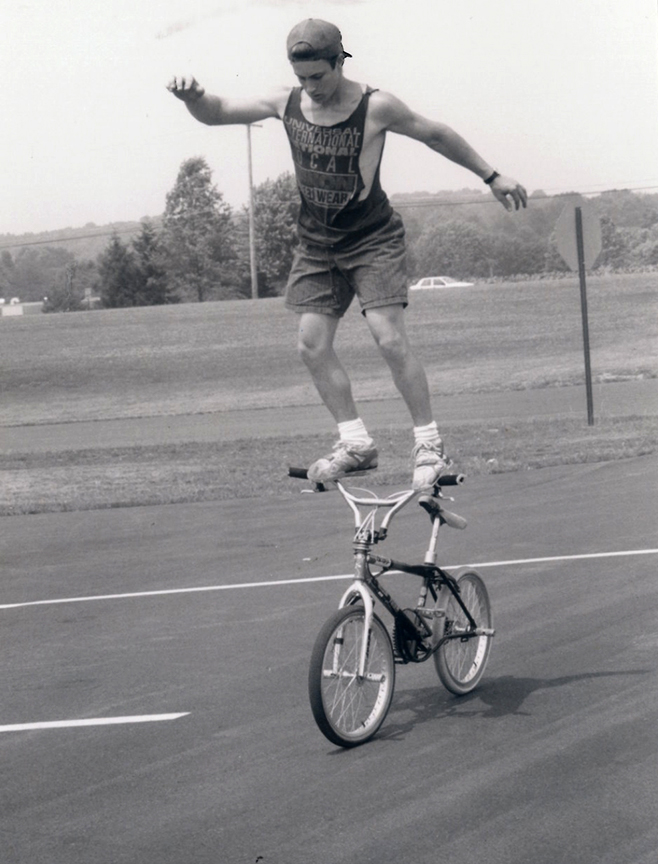 They soon connected with the Pyfer brothers, Wayne, Dan and Kevin, as well as others in Lancaster. Eventually their crew started traveling to regional and national events to compete, and Tony was bringing his video camera along for the ride.

“My uncle was crazy, and he had this big old school VHS camera set-up, with the cable feeding from the camera to the recorder.  He let me borrow that and I started to film more and piece together short videos.  Eventually I got a newer Hi-8 camera.  I made a video called Ingratitude, and then I made All Souled Out.  I sent that one into BMX Plus, and they gave it a pretty bad review.”

Tony relayed how bummed he was that his sophomoric video had been blasted on the pages of BMX Plus, but rather than give up, it spurred him on to make a better flick the next time around.  The next video was Neat-O Stuff.

We talked for a while about amateur video editing back in the days before digital; the crude analog methods of capturing footage from the camera using a VCR and a tape deck, timing the music just right, and secret tricks like turning on the recorder to let it warm up for a while in order to minimize the static between clips on the master copy.  It was a ton of work to edit a video back then – a lot of trial and error experimentation.  And although there was something so cathartic about completing a video using analog, I don’t miss the process or frustrations one bit.  I asked Tony how he did the titles and captions for Neat-O Stuff.

“I snuck into a college film department to make the captions.  While I was in there trying to figure out how to use the equipment, a professor came in and asked if I needed any help with the character generator.  I was like, “Sure!” pretending to be a student who was supposed to be there.  I figured he was onto me straight away.  (laughter) He asked to see my project, and then he asked if I even went to school there.  I was like, “No.”   And he said, “Do you want to?”  That professor eventually wrote me a letter that got me into film school at Temple.” 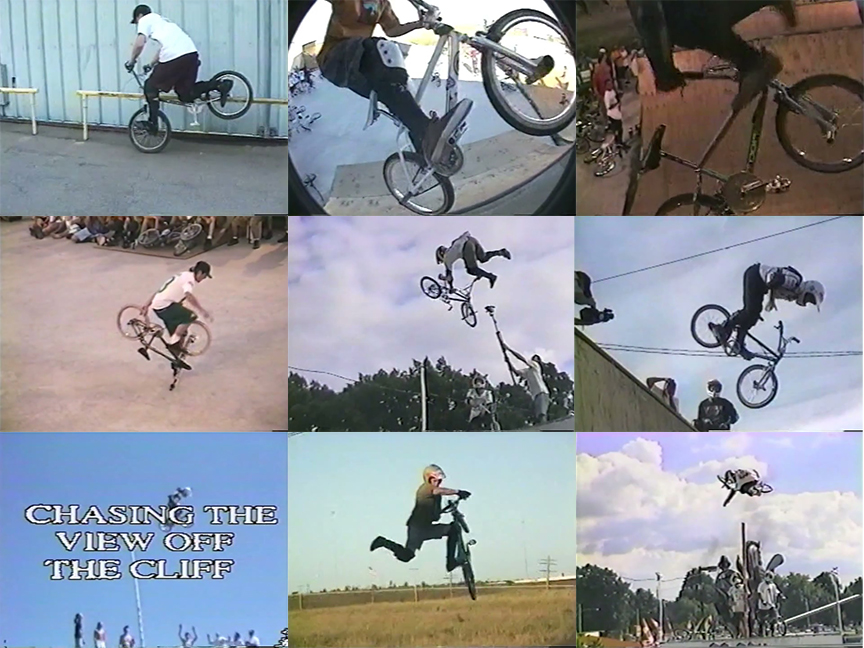 Neat-O Stuff was completed in 1993, but it never saw a review in BMX Plus, like Tony’s other videos.  It was well made, and uniquely captured the reemerging freestyle scene, but besides Mat Hoffman, I was the only one who seemed to have seen it.

“After the bad experience with my other video, I was a little timid about sending Neat-O Stuff to BMX Plus or Ride to be reviewed.  I mostly just gave copies to friends or riders who were in the video.  I sent a copy to Hoffman Bikes, because there was a lot of BS comp footage in there.  I didn’t do any promotion for it at all.  I made the video for myself and my friends.   Promotion definitely wasn’t my strong suit.”

I sometimes thought the reviewers from the magazines were a little snobbish.  So few videos were even being made that most of the riders I knew were psyched to see any BMX movie, good or bad.  Honestly, we didn’t know what a bad video was.  If there was riding in it, it was good – in our eyes. Tony and I drifted back into talking about riding, and I asked if he had any stories about Mark Eaton and the Plywood Hoods.

“Well, I had the vert ramp in my parent’s back yard, and people were always asking if they could ride it.  One day, Eaton called and asked if he and a friend from out of town could stop by and session the ramp.  My parents were strict.  They didn’t want someone getting hurt on the ramp, so I had to be pretty exclusive with access.  But it was Mark Eaton, so I said, “OK.”  A few hours later, Eaton shows up with Brett Downs and this kid who was totally blasting the ramp.  The kid turned out to be Dave Mirra, and I met him for the first time in my backyard on my half-pipe.  That’s always been crazy to think about.” 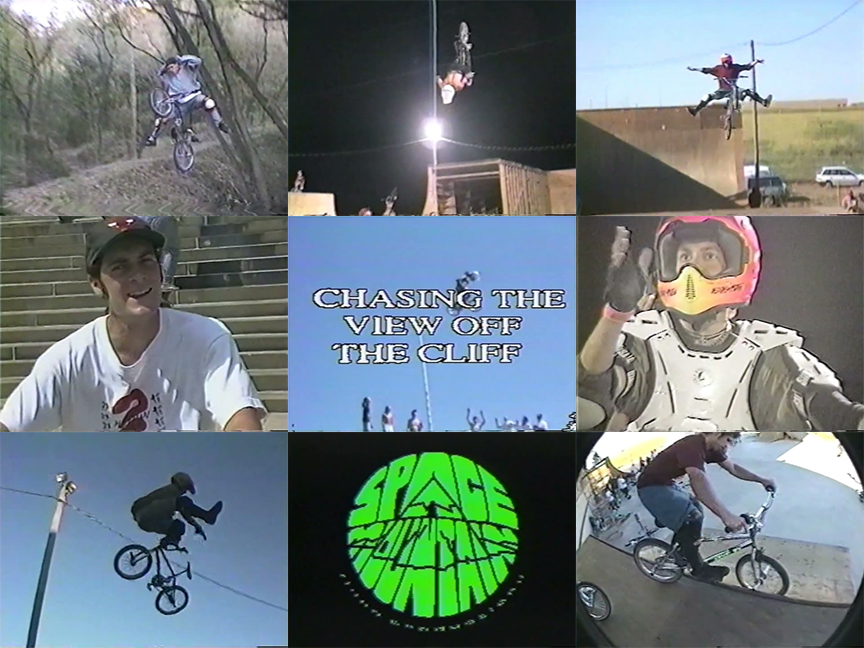 Chasing the View off the Cliff came out in 1994, and it had a distinctly fun feel, with sections blending into one another, almost like a concept album.  More DIY BMX films were coming out by this point in time, but many were haphazardly assembled clips without much of a plan.  CTVOTC was more intentional with peaks and valleys and clever editing. Yet once again, relatively few saw it.

“We premiered CTVOTC at a theater near where I lived, and I remember Mark Eaton, Luc-E, and Joe Rich came out to watch it.  I did send a copy to BMX Plus, and they gave it a four-star review.  Mark Losey even came up to me at a BS comp later that year and told me he liked it a lot.  I sent copies to Mat Hoffman, and a few other people, but didn’t really try to sell them anywhere.  Mark Eaton gave my information to a Japanese distributor that carried the Dorkin’ videos, and I sold around 2000 copies to foreign markets. – Thanks again Mark . . . I even had a rider (who was in the video) approach me for 10% of the profit, but the fact was – I didn’t profit from these videos – I lost a lot of money on them (gas for driving across the country to contests, etc.)”

The question remained:  Why wasn’t this video more popular?  Why hadn’t it attracted distribution like some of the other weaker videos that came out from that same era?

“There are a couple of reasons why I think the videos weren’t more popular.  First, I always just tried to represent us as us.  Our riding crew . . . we weren’t really rebellious. We didn’t have an attitude; we were just having fun. Maybe some things were a little too corny for the hardcore BMX crowd.  That was us though.  Secondly, I’m not a huge networker.  I didn’t have an endless list of contacts.  I didn’t self promote.  I would talk to people at events, but I didn’t promote or advertise my videos at all.   I didn’t push it.  I wish I could have done more of that, but that just wasn’t who I was.” 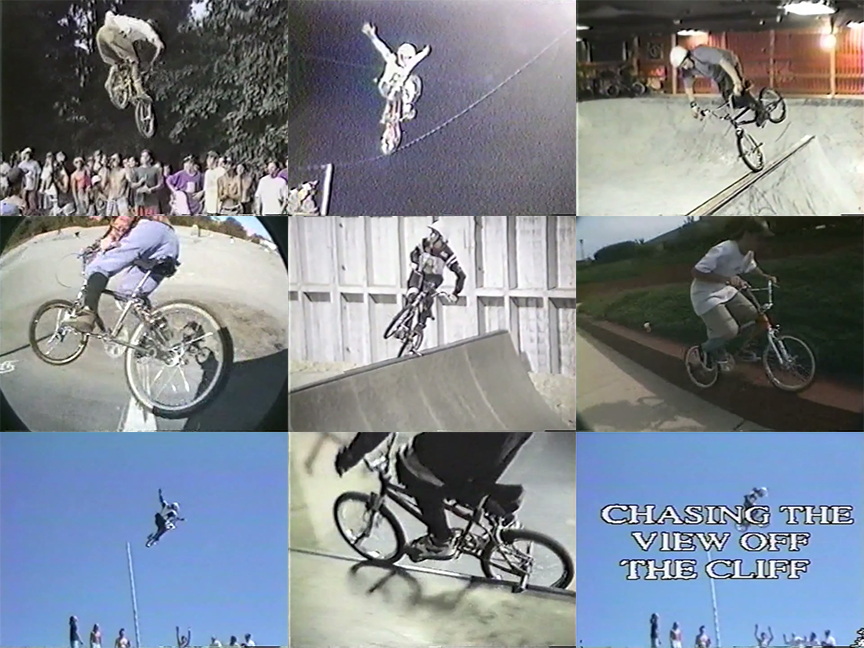 Around 1995, I’d heard that Tony was working on a Dennis McCoy bio video.  They even stopped by the Hoffman Bike Park one day to film.  I asked if he could give me any more details about that project.

“My biggest regret in BMX is that that video never got finished.  I’m not even sure why it didn’t get done.  Dennis had left a message on my phone after seeing Chasing the View off the Cliff and asked for a copy.  We would always chat at contests and Sprocket Jockey shows.  One year at a Shimerville contest, I asked him why he had never made a video, and I said I would do it.
We got together and filmed some vert stuff at his house in Kansas City, at the Hoffman mini-spine ramp, and some stuff when he was in Philly on a SJ tour.  We lost touch for a little while due to me moving around a couple of different times, and to make matters worse, my camera and VCR both died. Then I had an unfortunate incident with some flooding in my house, and all my footage from all my videos got destroyed. I have almost nothing left.  The water wrecked most of what I had in storage. Dennis may have felt even worse about it than I did! The only thing I was able to save was one bad digital copy of Chasing View off the Cliff.”

. . . So that’s why Tony’s videos weren’t more popular and never made their way onto Vimeo or YouTube like many others from the early 90s.  The lack of distribution coupled with the fact that the originals had been destroyed in a flood sealed their fate.  I was bummed to hear about the lost footage, but the mystery had finally been solved. 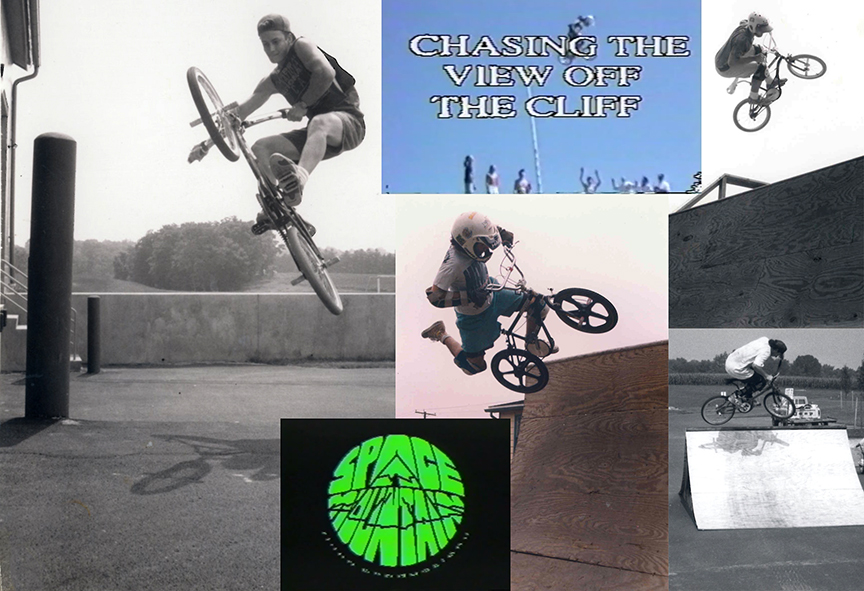 It’s super-generous of Tony to relinquish these lost artifacts to Snakebite, and we are going to be posting up select sections from Chasing the View off the Cliff over the next few days, along with the full video, so stay tuned!

If you have any memories of these videos, happen to have a copy of Neat-O Stuff, or possess any other lost footage from the past, please let us know in the comments!
//PC