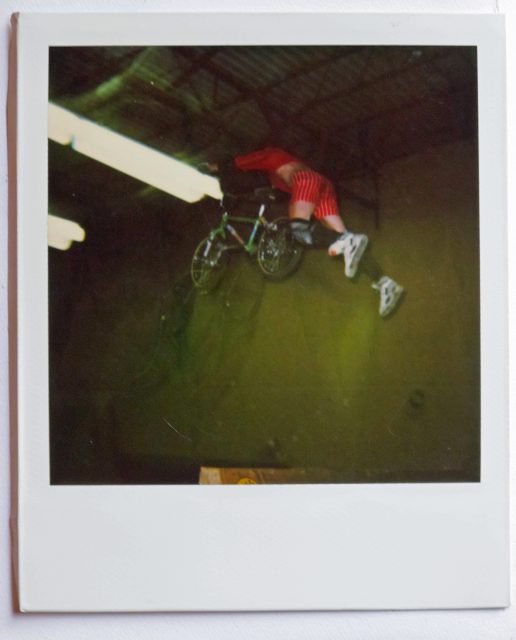 In the summer of 1991 while visiting my uncle in Austin, I got to scope out the center of Texas BMX – Trend Bike Source. The BMX cosmos was miniscule in those days. My hometown was remote and rural; I’d never even met another freestyler before, but felt confident that someone at Trend, whose cleverly eclectic mail order ads ran in Freestylin’ and BMX Action, would be able to point me in the right direction. So I inquired of the ever-helpful Tina (Williams) about any spots or local riders I might hook up with. 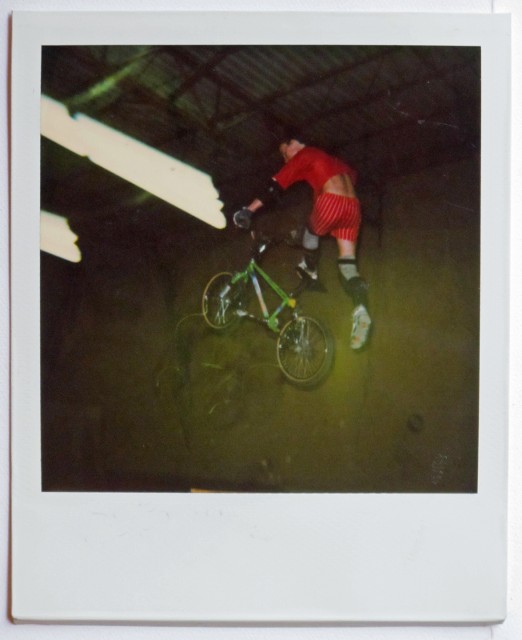 Subsequently, an insouciant-eyed James Shepherd materialized from the warehouse, and having overheard our conversation, informed me that, although he wasn’t riding that day “…because man, it’s July and 102 degrees outside…” after sunset I should stop by a North Austin warehouse being rented to a guy by the name of Jeff Harris.

Arriving later at the dimly-lit industrial address which Shepherd had scribbled on a post-it, I was greeted by a dude wearing knee & shin pads, those high-top Reebok Pumps with that orange basketball pump apparatus on the tongue, and some red shorts that might make Tom Dugan blush.

“Howdy. I’m Jeff. These are my ramps,”
He said, followed by an obligatorily concentrated Texas handshake. Jeff was in his early twenties and looked kinda like a young Iggy Pop riding a lime green 1986 Haro Sport fixed with a coaster-brake.
“You’re welcome to ride here,” Jeff said. “Just pay attention; I’m going really fast and I don’t want to crash because you aren’t watching where you are going.” …an early lesson applicable to ramp etiquette, driving, and life in general.

The warehouse itself contained an array of obstacles including a 9ft tall, 8ft wide half-pipe made of two facing quarters and an “invisible half-pipe” tire/rope swing contraption hanging from the rafters. But the central features of this plywood playground were the box jump and a banked transition-to-wall setup. 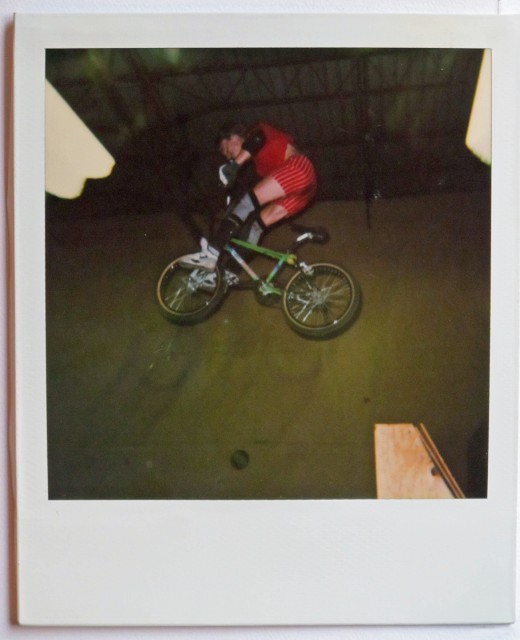 To acquire enough speed to simply clear the box, you had to start pedaling a block away, navigate around a corner, over 2 speed bumps, and up an inclined driveway into the warehouse. Not an easy spot for a novice like myself, but Jeff, who seemed ambivalent to everything except cranking at the kicker as fast as possible, massacred his home turf with wild 360 combos, unheard of ninja barspin variations, massive wall-rides, and transfers that made absolutely no sense. I was amazed.

I happened to have my camera with me, a Polaroid, and snagged a few pictures. These are the best ones, and I guess probably the first pictures I ever took of someone riding BMX. As far as I know, Jeff was one of the first riders to stretch superman jumps in this manner, by pushing the bike out with his arms as well extending his legs straight.*

That same year, I heard that Jeff and the Homeless Bikes crew had traveled to the 2-Hip contest in NYC where he spent most of his run coming extremely close to pulling a Drano (body varial). Dave Parrick premiered Homeless III in 1992 and Jeff had a section, but I never heard much about him after that. Later in the decade, sources told me that he had a difficult go of it and may have had to spend some time in prison. Regardless, Jeff had left an impression on me and on freestyle. He provided a fun, free place for widely influential Austin locals to ride in an era before private warehouses or public skateparks really existed, and he pushed jumping variations into new territory. If anyone out there knows more about Jeff, please share below in the comments.

* Chad Herrington also deserves credit for stretching supermans further on jumps, and it wasn’t much later that riders like Taj Mihelich, Ed Koening, John Englebert, and Keith Treanor’s supermans were even more clicked and held even longer, bringing widespread popularity to the trick.

This entry was posted in Articles and tagged Austin, Jeff Harris, Paul Covey. Bookmark the permalink.