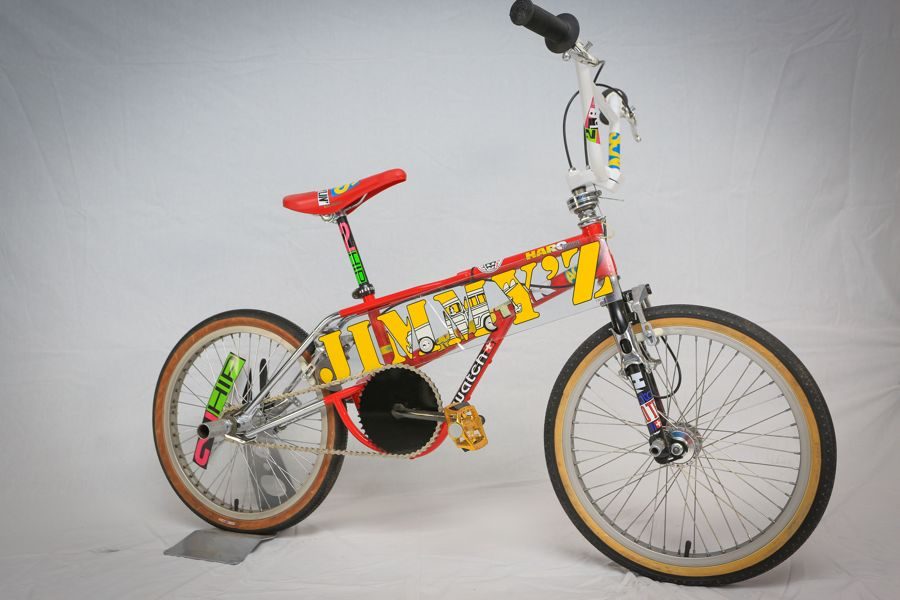 I started riding BMX freestyle around 1985. I rode a Haro Master after and built a wedge ramp and rickety ¼ pipe with my dad in the driveway. I wasn’t a fan of the typical summer sports like baseball and soccer. I needed the adrenaline rush. Ron Wilkerson was my favorite rider. I’m sure you all know of the Boy’s Life magazine cover photo. That one hand, one footed air with him smiling…. I wanted to be like that. I grew up watching Ron push the limits of the sport and creating a rad contest series. Ron helped our local New England contest series called the Eastern Ramp Association (ERA). The ERA held half pipe and street contest, which helped spawn locals like Kevin Robinson (KRob), Keith Mcelhinney, Scott Moroney, Bill Cole, and more to new heights. 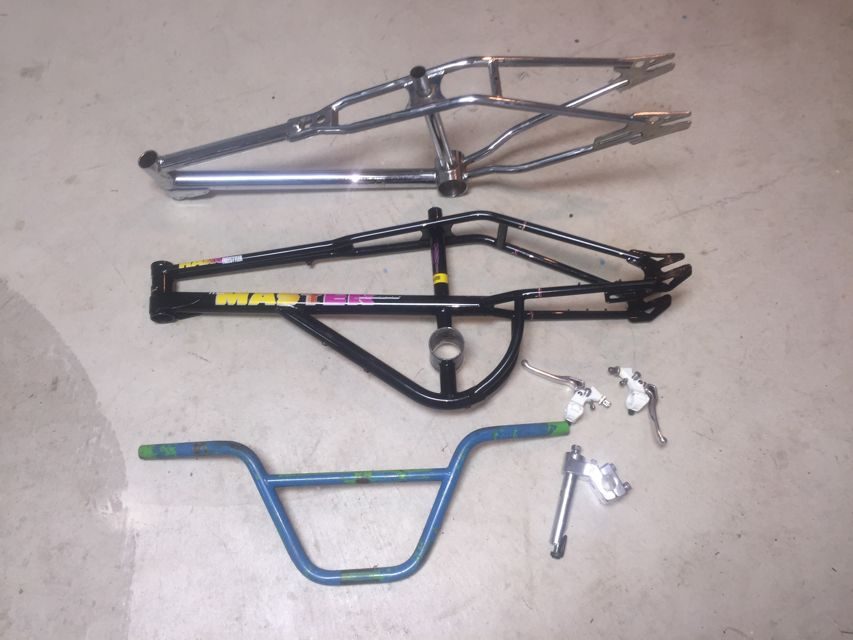 I faded away from the BMX scene during 1992. I met my soon to be wife, bought a house, had kids, and did the adult thing. There was something missing in my life, BMX. KRob started a local contest event called Wisdom to Youth in 2013. He asked if any of us “old guys” had our old bikes to display at the contest for the kids of today to see. That was it, what I needed in my life, my BMX pilot flame was just reignited. 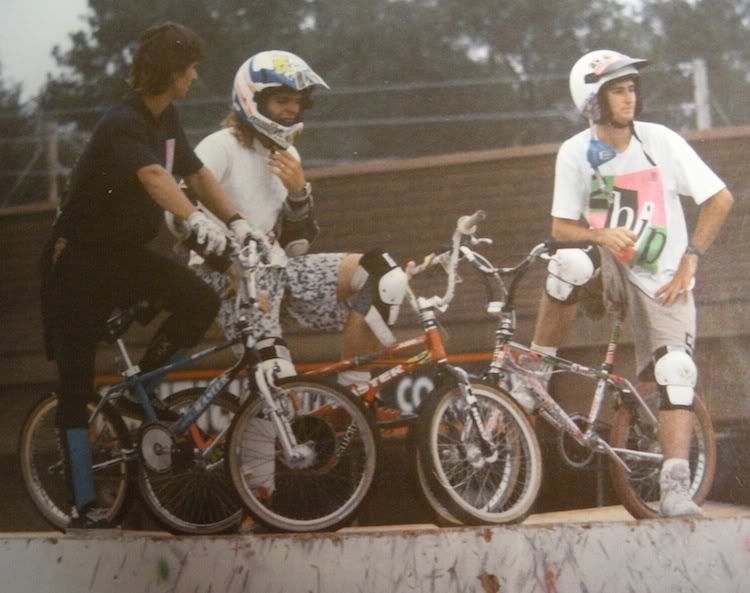 I took my rusty 1989 Haro Master out of the shed and brought her back to life. Doing that, I soon bought 2 more bikes to restore. Restoring was my next chapter in the sport of BMX. I always rode a Haro bike during my youth. I saw John Buultjen’s Haro collection video and was flawed. I was like; imagine if I could have all of the Haro bikes line up from the years when I rode. My first plan was to get one bike that I really wanted as a kid from the years 1985-1992. Well, that turned into wanting a bike from the years Bob Haro ran the company. I ended up building a replica of his 1981 Torker as well. I now have 24 Haro bikes including a Dave Mirra replica, which had to be built after his passing. 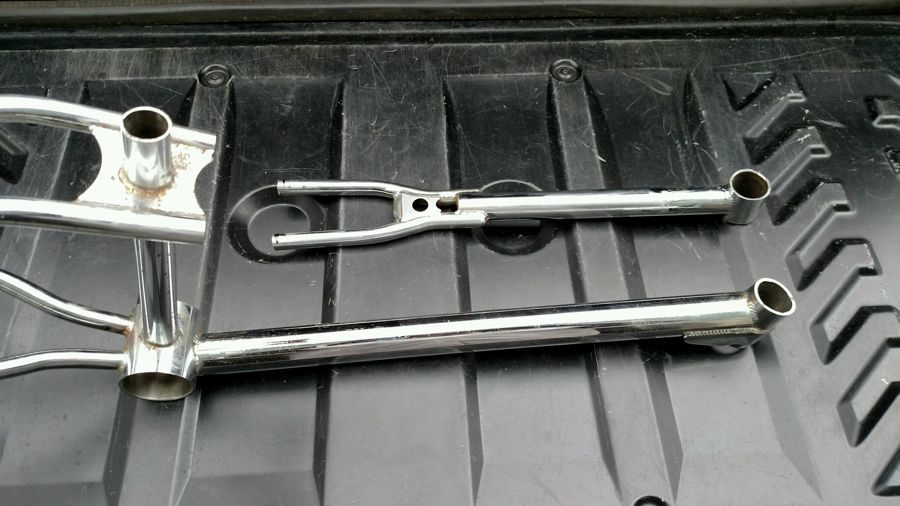 I was very content with my Haro collection BUT was kind of bored and wanted to do something else. But what? One of my best friends, Tom Bacis, runs a local bike swap/show event in Massachusetts. He awarded a “Best of Show” to Dan Hagler for building a Mat Hoffman tribute PK Ripper. I thought what a great idea, my next bike will be a tribute bike to my favorite rider, Ron Wilkerson. 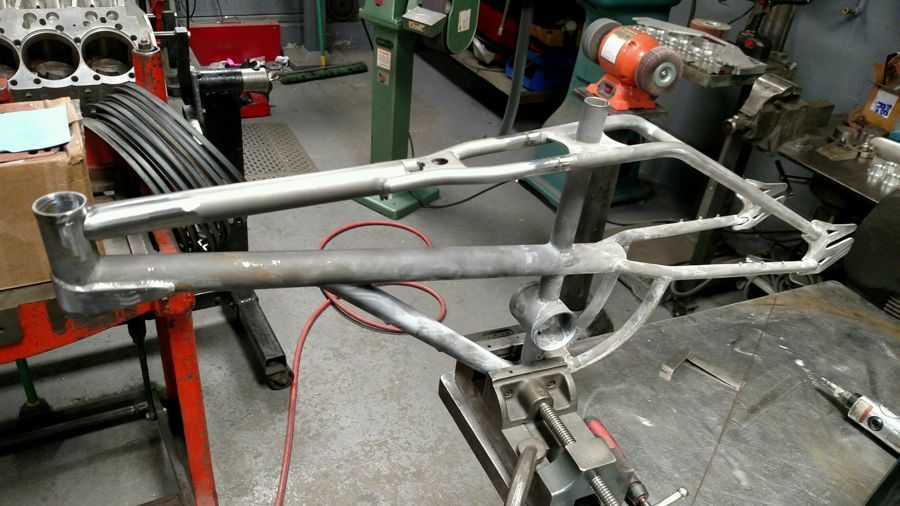 Ron rode many Haro bikes in the 80’s, so which one should I do? I searched countless photos on which one to do. Do I make the 1986 blue Sport with white Woody bars, the 1988 Sport on the BMX Plus cover of Ron doing a nothing air, and finally there it was. I saw the BMX Plus two page spread of Ron doing a fast plant on a punk ramp in San Diego, CA. This was a red 1989 Haro Master bash guard bike with Jimmy’Z, ACS, Swatch, and 2-Hip decals all over the place. But wait Ron never rode a Master he always rode the Sport. I did some serious research on this bike and discovered an article written by Eben Krackau.

This article stated that in 1989 Haro made 6 prototype Sports that had the look of the already released bash guard Master. This had to be the bike that I recreate for my tribute build. I was lucky enough to find six photos and one old VHS video of this bike online. I bought the magazines that these photos were in off eBay to try to gather a parts list. This was a tough task as the photos weren’t the clearest images to see the fine details of his bike. I scoured the Internet, BMX Museum, Facebook groups, and OZ BMX to name a few for countless hours looking for the right parts. My wife just keep rolling her eyes and saying I was crazy. Well maybe I am…

I had a used/rider condition 1989 Haro Master that was to be used for the project bike. I needed to find a 1989 Haro Invert to act as a donor for the top tube of the Sport. The Invert’s top tube was different than the previous Sports top tubes and matched the prototype’s perfectly. I contacted a local bike collector friend who also does restoration work for a living. I meet up with Chaby and immediately knew he was the man for my project. I knew this by looking at his toolbox. All of his tools were clean, in place in his toolbox, and his shop area was well maintained. His attention to detail sold me instantly. We came up with a plan on how to make this project a reality.

Chaby’s welder surgically removed the top tube from the Invert as well as the one from the Master. He welded the new one in place with a seamless weld. They chromed the frame and then powder coated the frame to a very close red to the original color. Thankfully, John Buultjens came to the rescue with a decal kit for this color way. Cheers, mate! 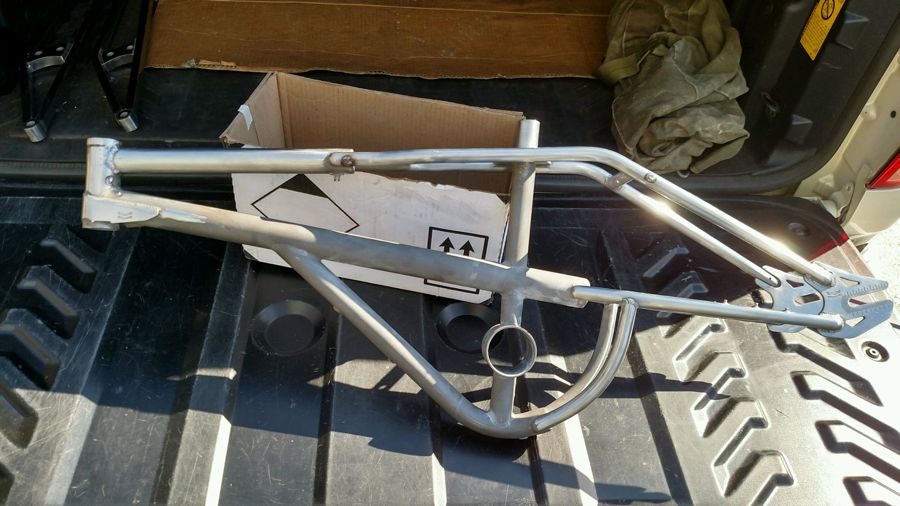 I recreated the sponsor decals on Photoshop, as most were not available anymore. I found a 48h Suntour coaster hub online so I could run my old childhood ACS Freecoaster in it. A great set of ACS R.L. Edge wheels fell into my lap too off of a Facebook group. I took a set of ACS BOA brakes apart to strip the black paint off to get them back to a silver finish. Use caution if you take these apart as there is about 300 mini ball bearings in them. A buddy in New Hampshire had a set of Woody bars for sale. They needed to be restored and they were well used. Chaby once again worked his magic, as they look NOS.

The hardest part of sourcing the parts was the seat clamp. All of the photos were blurry. I asked several people on what they thought the clamp was. The consensus was a Suntour Broken Arrow clamp. NOS gold Shimano PDMX pedals, a NOS ACS Pro Rotor, a NOS ACS Slant 45 stem, a set of NOS ACS Tangent brake levers, and NOS ODI Mushroom grips all were found on the Museum’s for sale section. 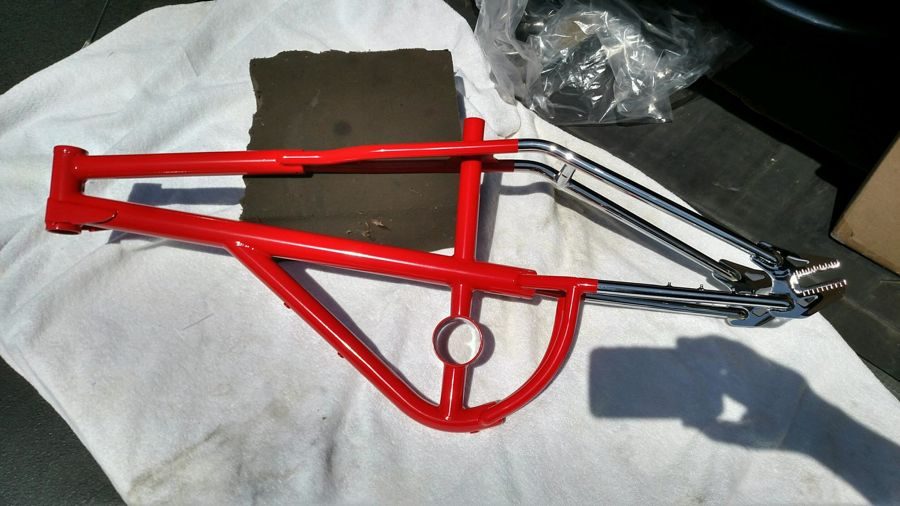 The sponsor decals were placed in close relation to the ones in the magazine photos. Ron had a lot more decals on his bike. I wanted to do a little less as to still show the bike off as well. Eben contacted me one afternoon and stated Shad from Snakebite actually had a huge yellow Jimmy’Z decal for my bike. Eben and I came up with the idea to attach the decal to thin vinyl and zip tie it to the bike. The decal’s backing would get dirty over time and maybe rip if it were applied like Ron’s was.

I won “Best in Show” at my unveiling of this bike at our Hatfield, MA summer show. I was so ecstatic! My hard work paid off. Luckily after tis show, a pair of Haro HPM 2.0 tires was sorted to put what I thought were the finishing touches on the build. 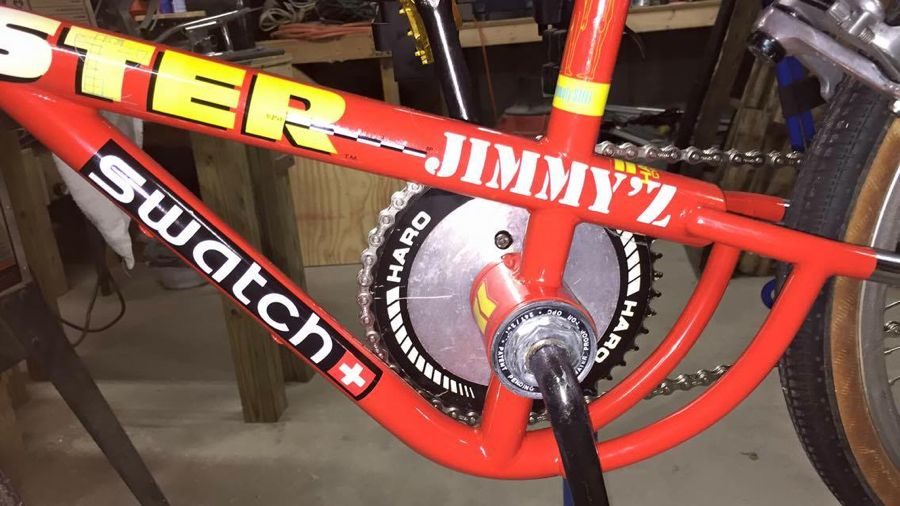 What I needed next was Ron Wilkerson’s autograph on this bike along with a photo with him. Planet BMX’s 9th Spring Fling was coming up and Ron was slated to be there. That was it, I had to be there. I drove 18hrs to Florida to complete my task. I took my bike into the bar area and showed it off. Ron was eating a cheeseburger at the time. He gleamed at it, gave thumbs up, and placed it up at the table with him thanks to help from John Buultjens! 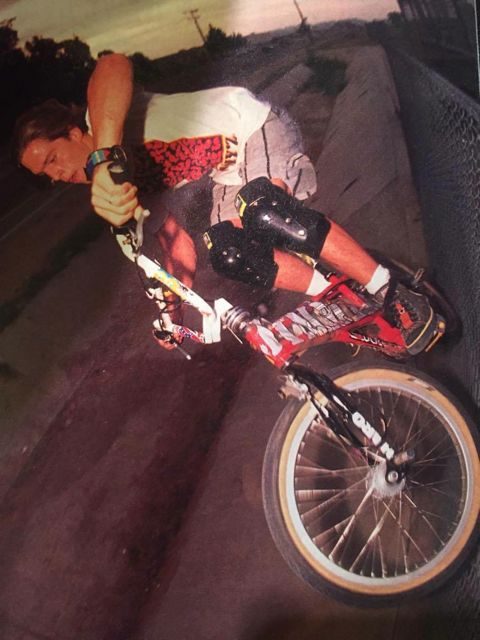 He keep saying, “that you built my bike, this is my bike.” Ron signed my chain wheel the next day and took several photos with it. Build completed!! 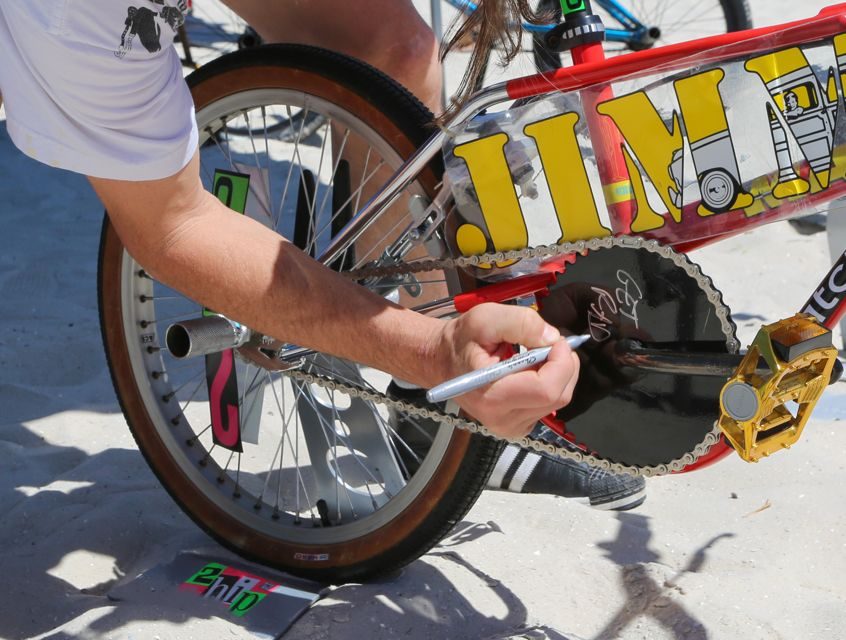 Thanks to the many of you who helped along the way with selling me parts. Eben, your extreme knowledge of this bike was a major factor. John, thank you for doing what you do for Haro and the love of the game! 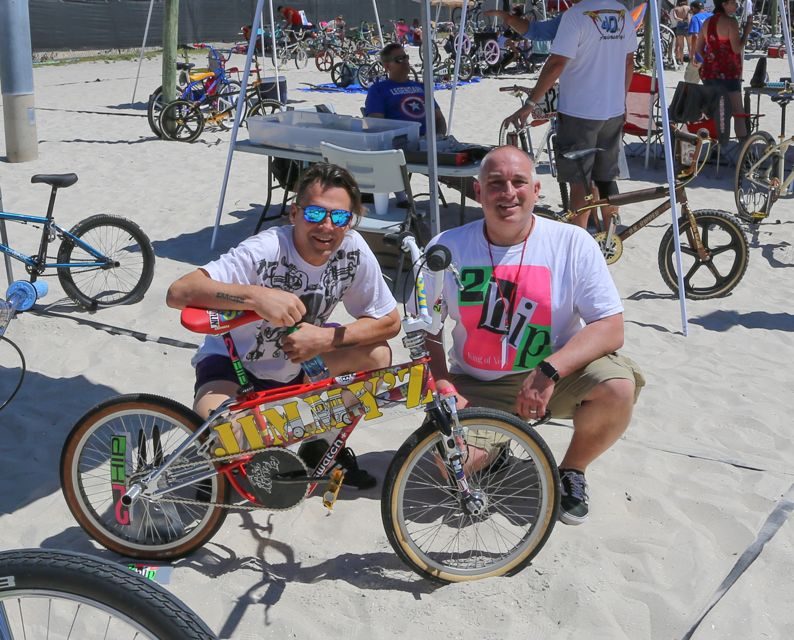