Kink Bikes turned 20 this year! We dug up some old ads and photo for a nice trip thru memory lane. 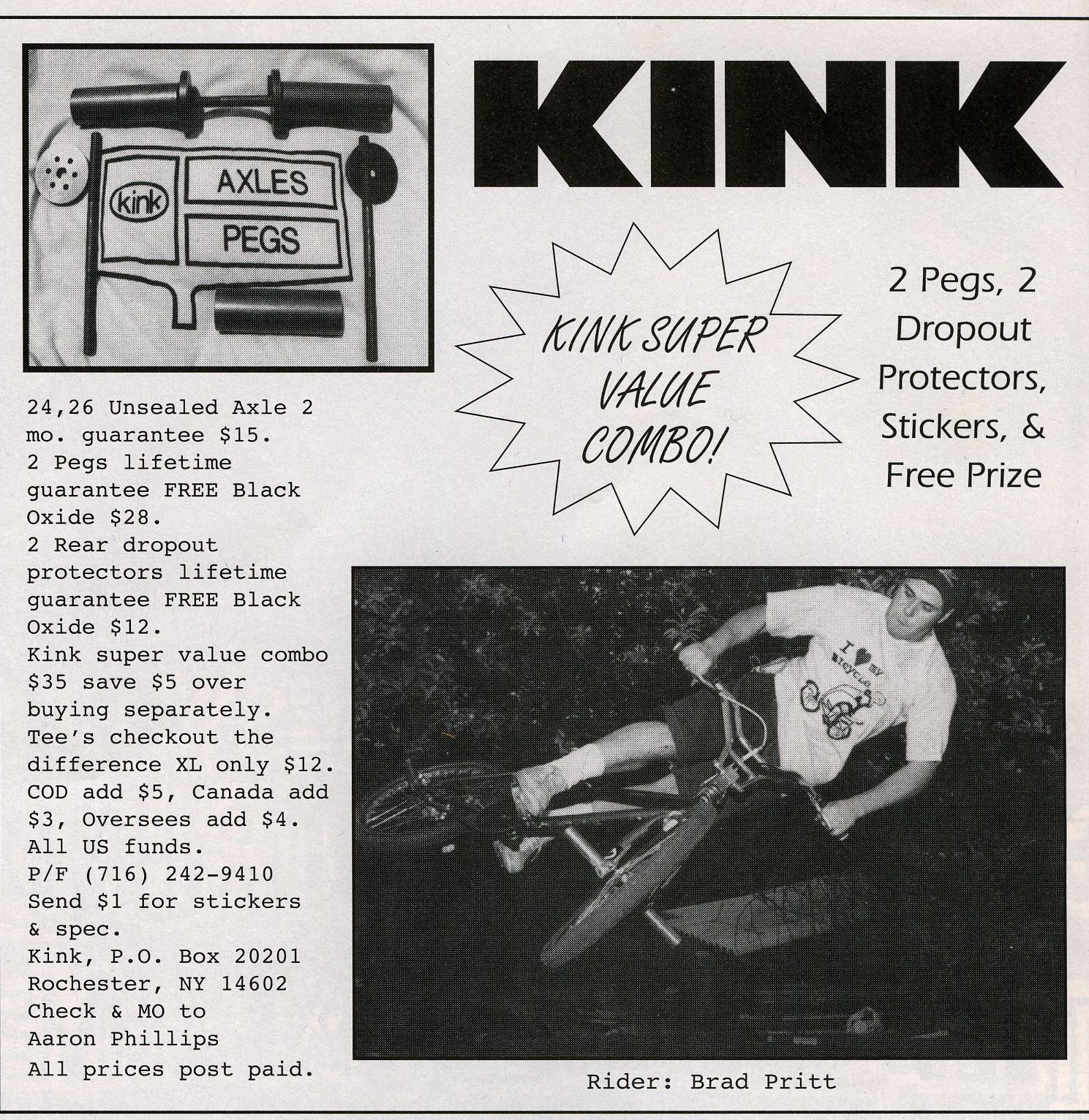 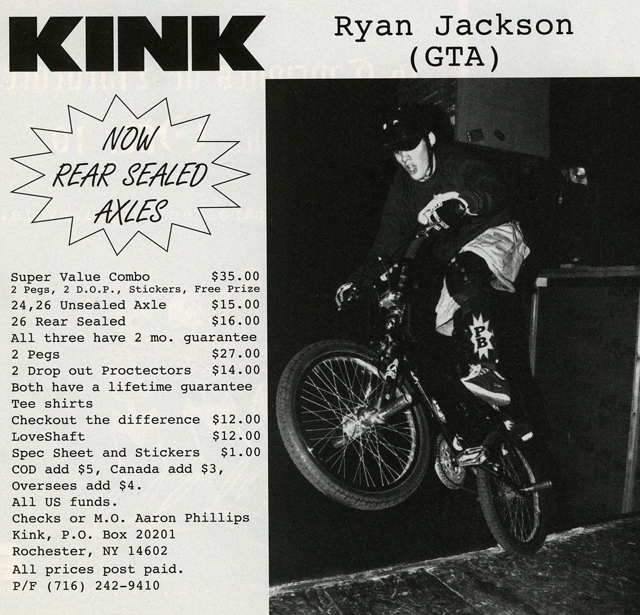 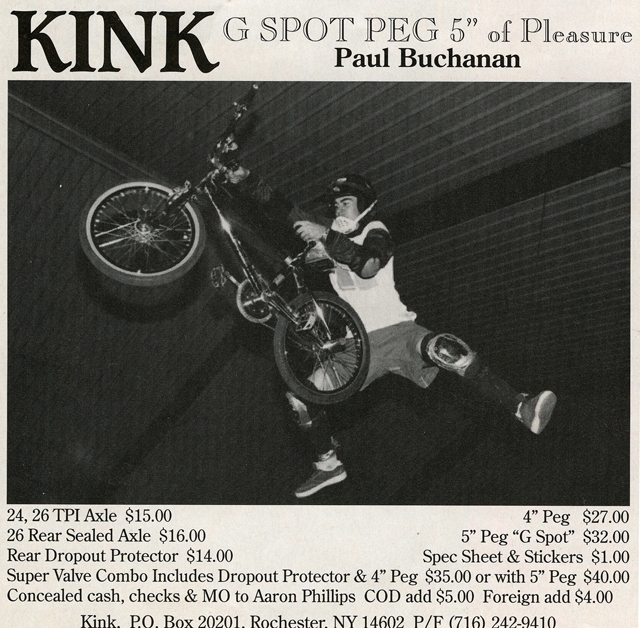 The early Kink ads definitely looked more like they would have been from a zine than in magazine. At the time though Ride BMX was just a few notches above just being a zine. I’m loving the first ad with Brad Pritt and those incredibly nasty Peregrine Q2 bars. If you went out and got yourself a set of Kink pegs and some dropout protectors back then you could say goodbye to your mild steel dropouts getting memory anymore. The Kink I-Beam was a life saver to. I do not know what was so difficult about installing a star nut back in the day but these made your life so much easier. 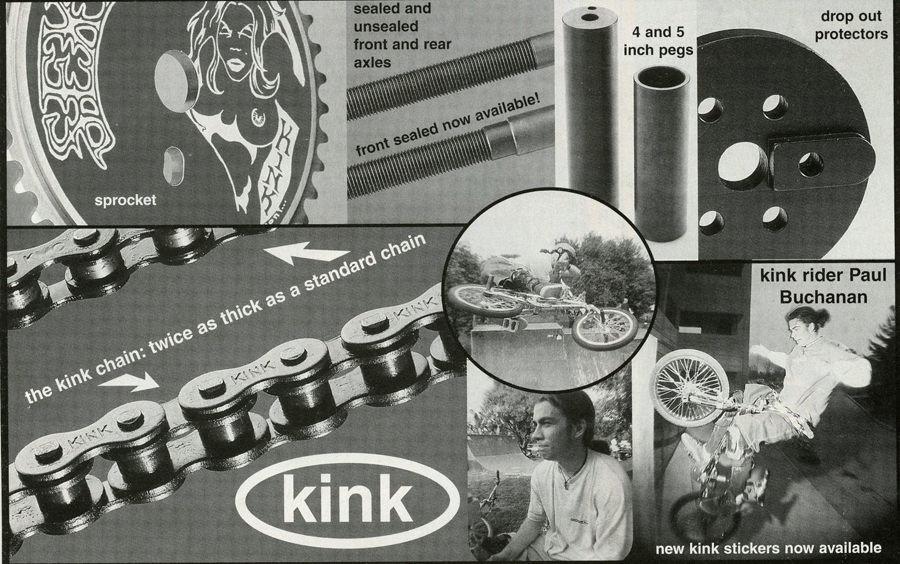 Paul Buchanan and the first Kink chain, two things that helped make the 90’s an awesome time to be riding. Paul B. was out there rewriting what you could do on a bike with a style that may never be replicated and that chain helped keep your bike rolling. The 90’s were so hard on bikes and this chain withstood so much and was ran by almost everyone.

The Sex Drive sprocket’s sticker was iconic! I am sure plenty of parents were tense after seeing this one. 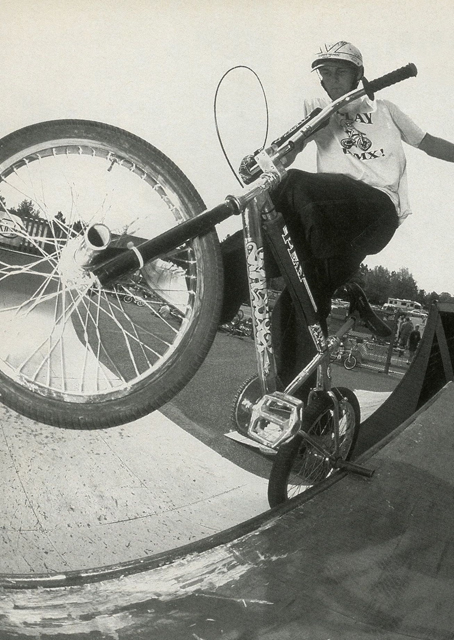 To me Leigh Ramsdell was one of the first really recognizable riders on the Kink team. At this time they were still making small parts and accessories and Leigh had just gotten on Bully after leaving Wilkerson Airlines, who had just morphed into 2-Hip. If the parts were holding up to Leigh who was known as a man who would destroy bikes and if it could hold up to Leigh, then you knew they were onto something. 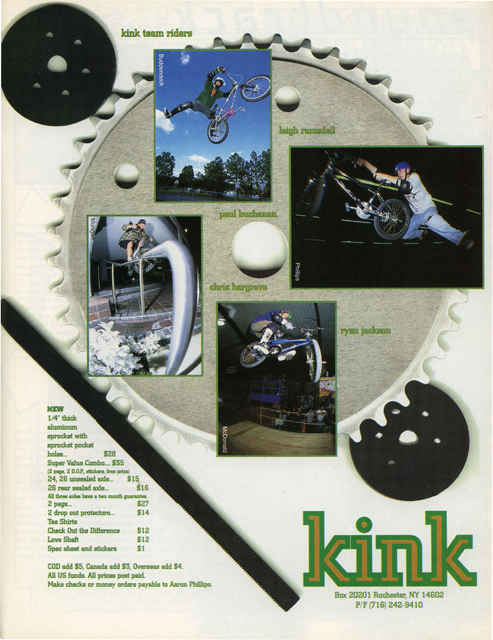 This ad has always stood out to me as the ad where Kink had turned the corner from being a small operation, to growing into a legitimate brand, that was starting to form an image and a team that you could start getting excited about. 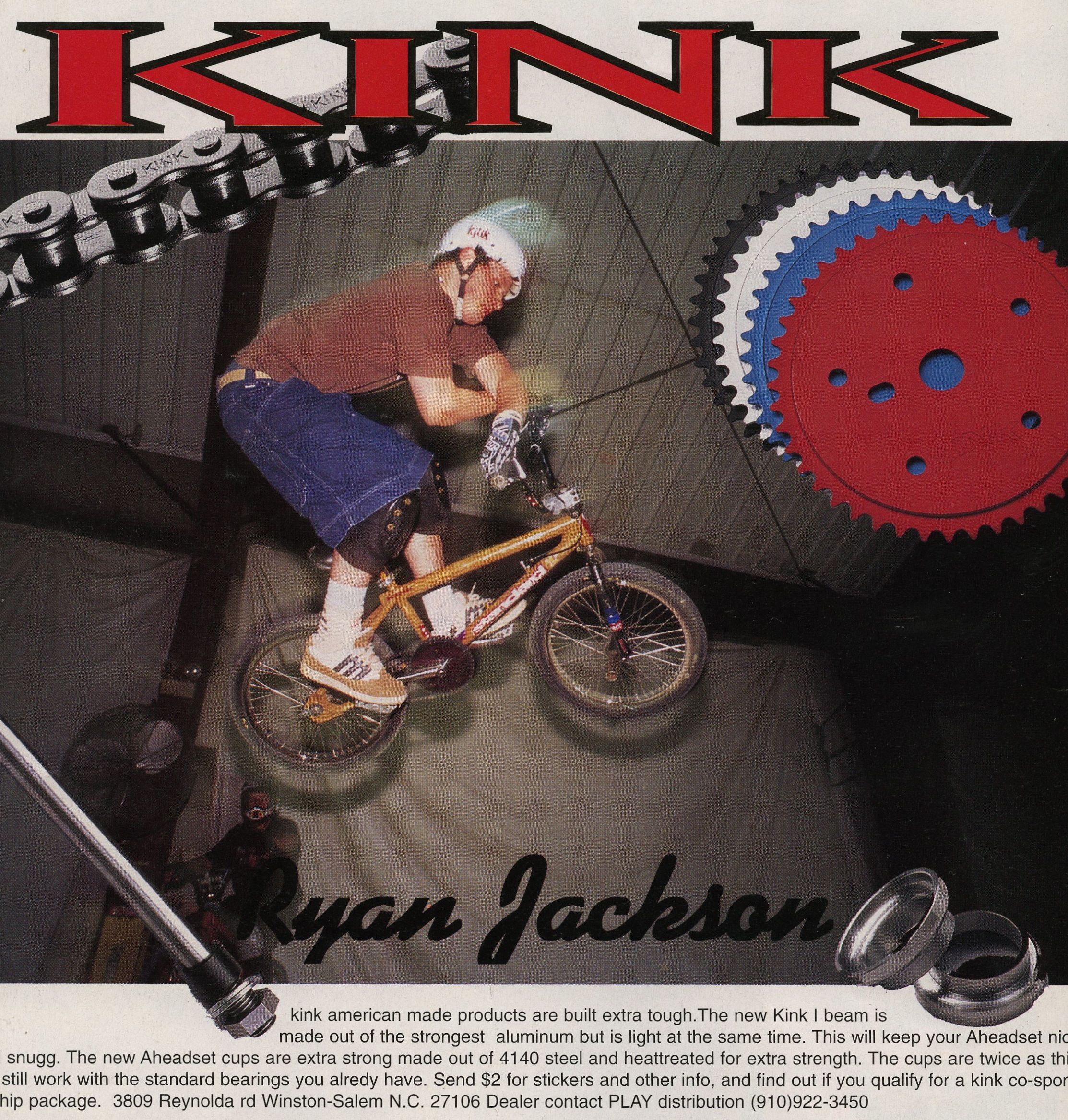 Ryan Jackson was a staple in the early days of Scrap Skatepark and that mid 90’s Chicago area scene. He was also one of the early team riders for Kink. I recently heard Ryan still rides the Southside Skatepark in the mornings before going to work running his own food truck. 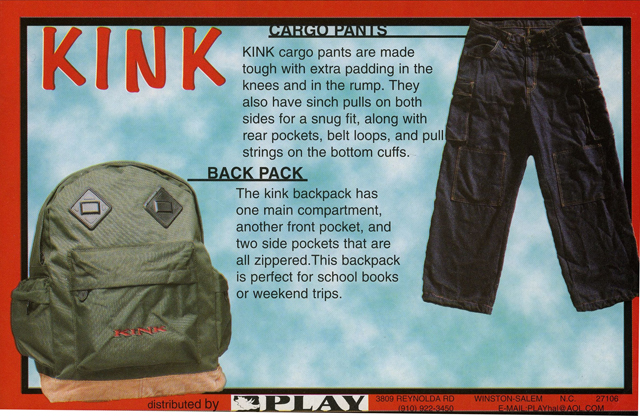 These pants though….Maybe I shouldn’t have scanned this one!
Did any actually have a pair of these? 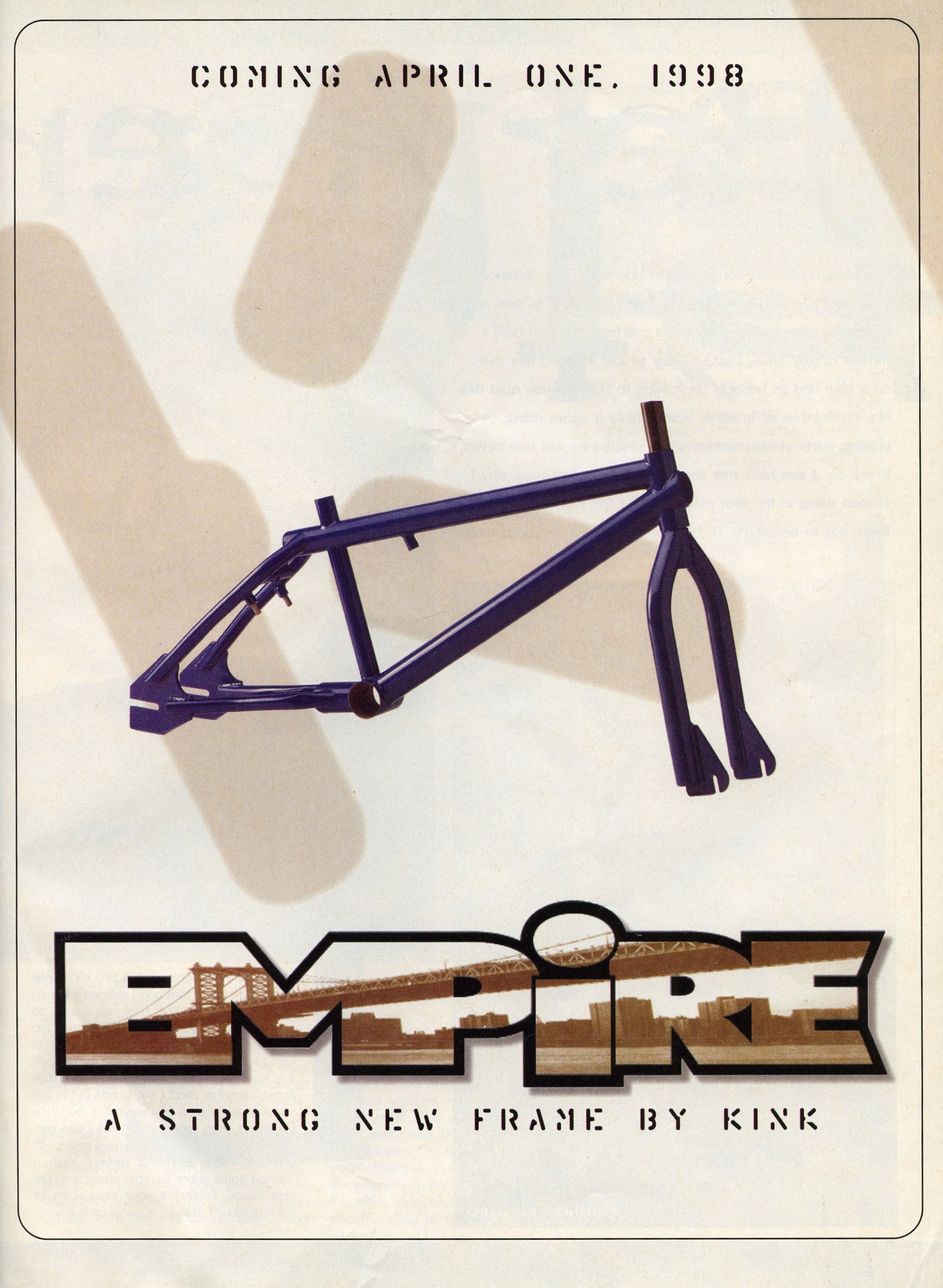 When Kink introduced the Empire frame in 1998 it definitely had people talking. From the pierced headtube that was reminiscent of a VDC or a Menstrual Cycle to the biggest dropouts I had ever seen. They were unleashing this tank onto the BMX world and I think it really pushed the overbuilt BMX bike into the 2000’s. 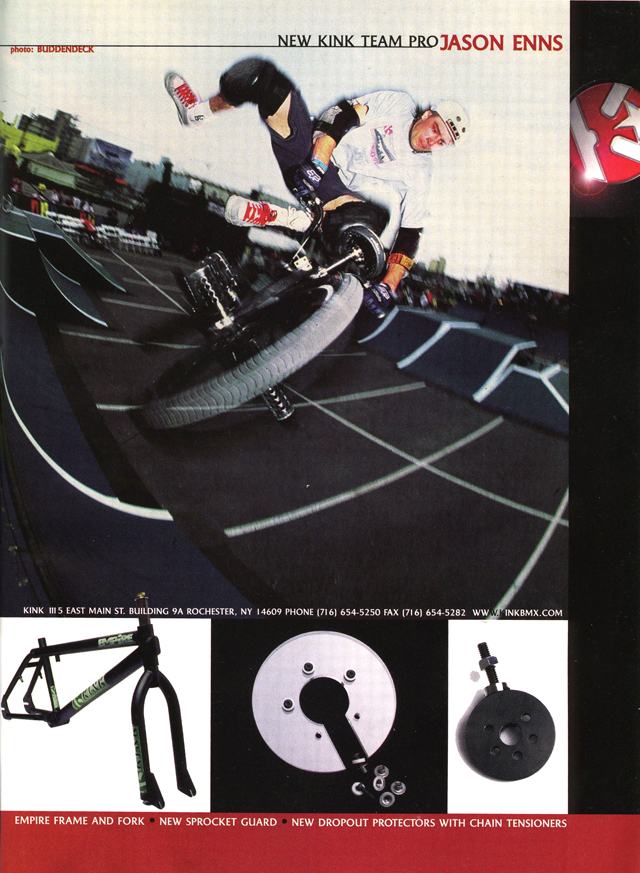 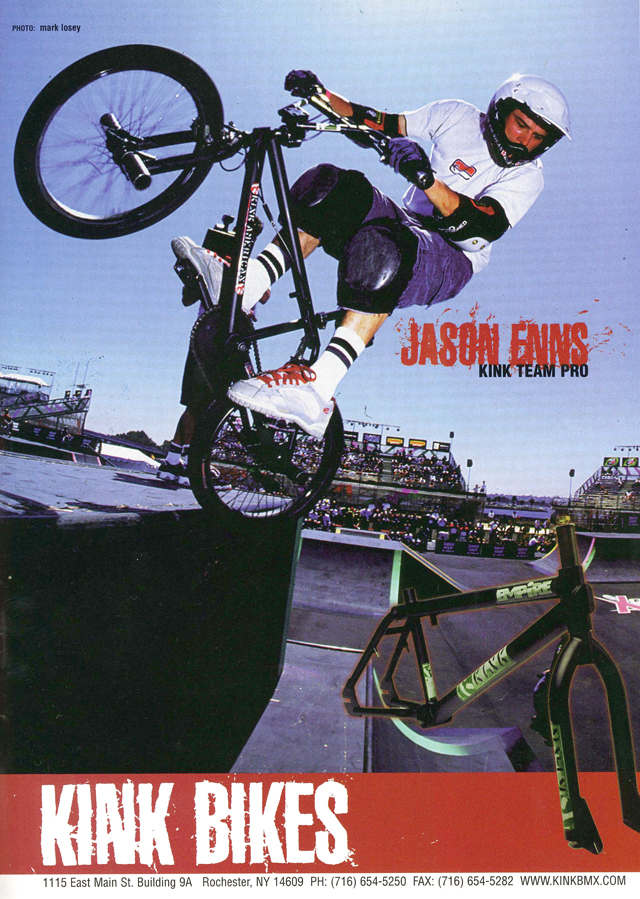 To me Jason Enns was Kink’s first big time pro now that they were a full blown bike company. Jason had just started turning heads on Basic and Kink swooped him up right before his first X-Games appearance. While Jason was known as a mini ramp champ we all know he went on to open up the streets with his signature tech/gnar style.
Photo: Mark Losey

Paul Buchanan Stayed with Basic in the late 90’s but still was running some Kink parts. Here he is is during the 1998 X-Games rocking a Kink sprocket. 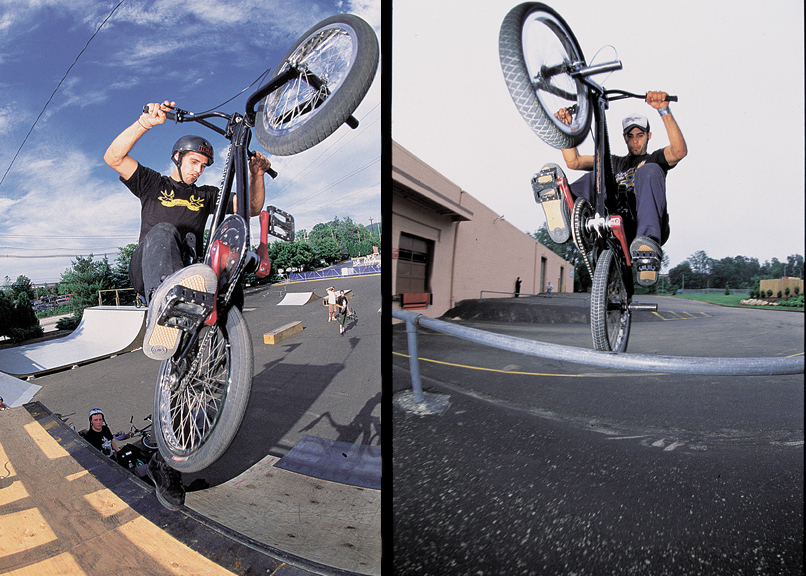 Dave Young’s time in the BMX spotlight was short, sweet, and to the point. Dave made such a strong impact in such a short amount of time. The Fiend was Kink’s first signature frame and they definitely couldn’t have picked a gnarlier rider at the time.
Photo: Jarred Souney 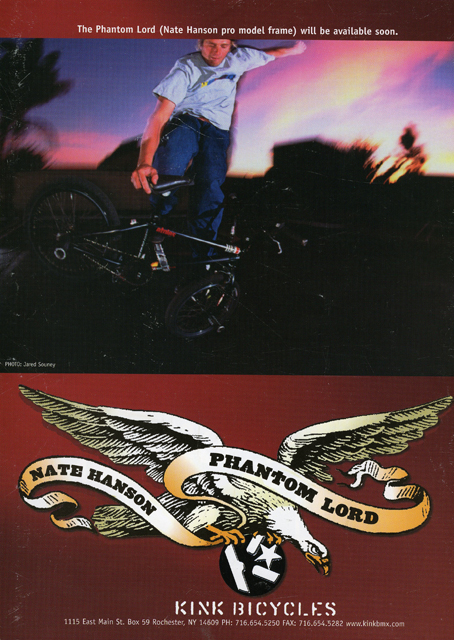 Nate Hanson was so ahead of his time. Today it’s not unusual to see a pro flatland rider break off and start riding street, Matthias Dandois is a good example of taking the blueprint that Nate had laid out at the turn of the century. Nate could do it all: flat, street, vert, and dirt. He did it all with a style that was so recognizable. 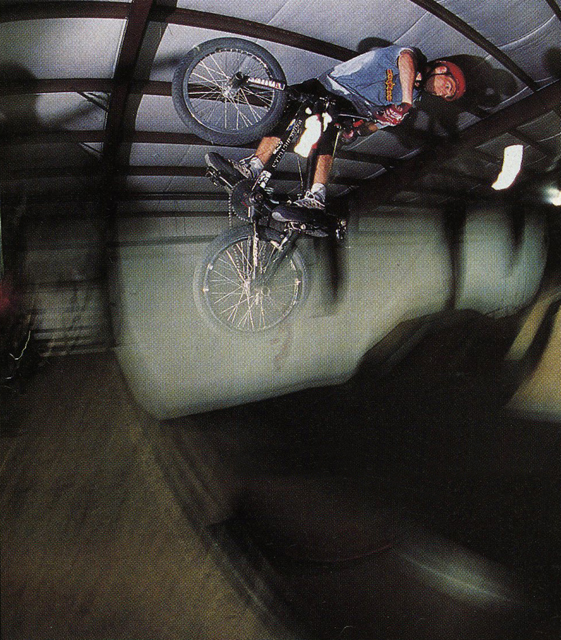 I always enjoyed that Robb Tibbs could shred some vert. Robb was known for his street moves but rattled the BMX scene when he pulled the first 900 on mini ramp during one of the FBM ghetto street contests. An all around beast on the bike! 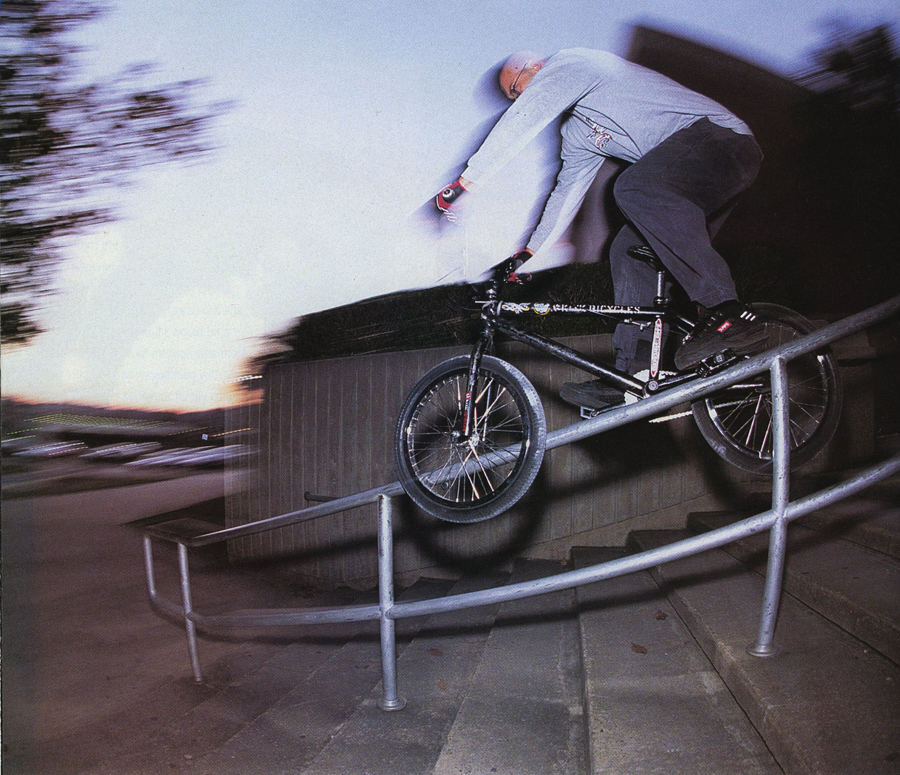 Jim Cielencki started his pro career a bit later on in years than most riders but started turning heads the minute he hit a rail. Chris Day may have been the first to try crank arm grinds down a rail but Jim made them a reality. 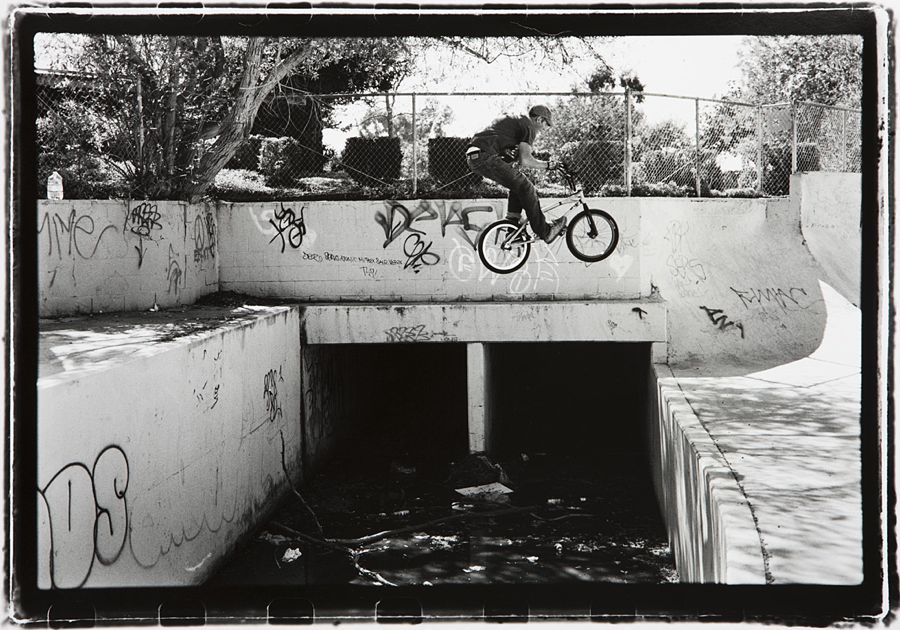 Ian Munro does not get the credit he deserves for being a handrail pioneer. Ian was the first to do a hanger down a rail to then some years later doing monster gap hangers to even manual to second stage hangers. Nothing Ian did was small and he was always a treat to watch. 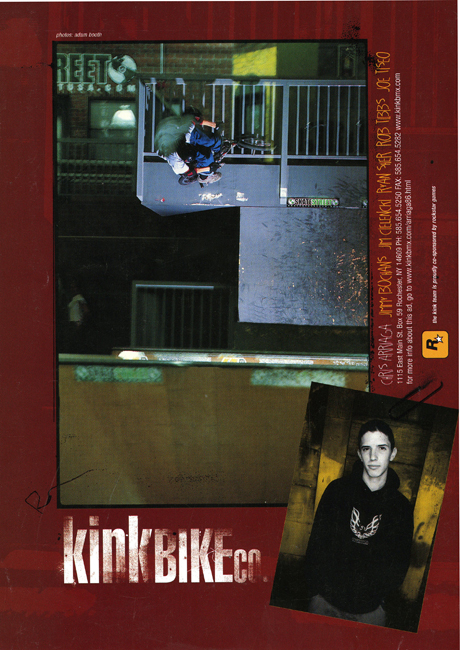 Chris Arriaga turned his bike riding into links straight out of the Dave Mirra video game. From more manual links than you can imagine to bombing some of the biggest rails. Chris definitely opened up th eearly 2000’s with his own unique style.
Photo: Adam Booth 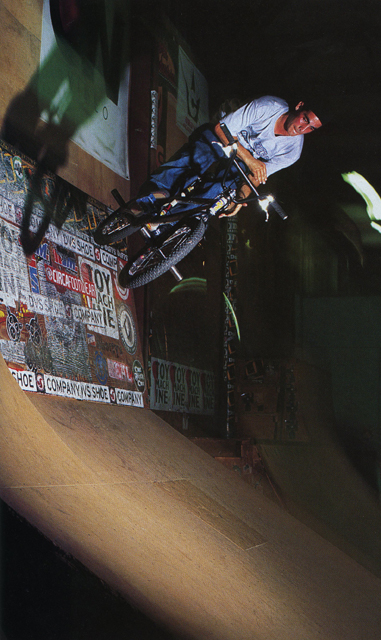 Joe Tiseo’s time here was tragically cut short by a motorcycle accident. Joe was just starting to put his mark on BMX. RIP. 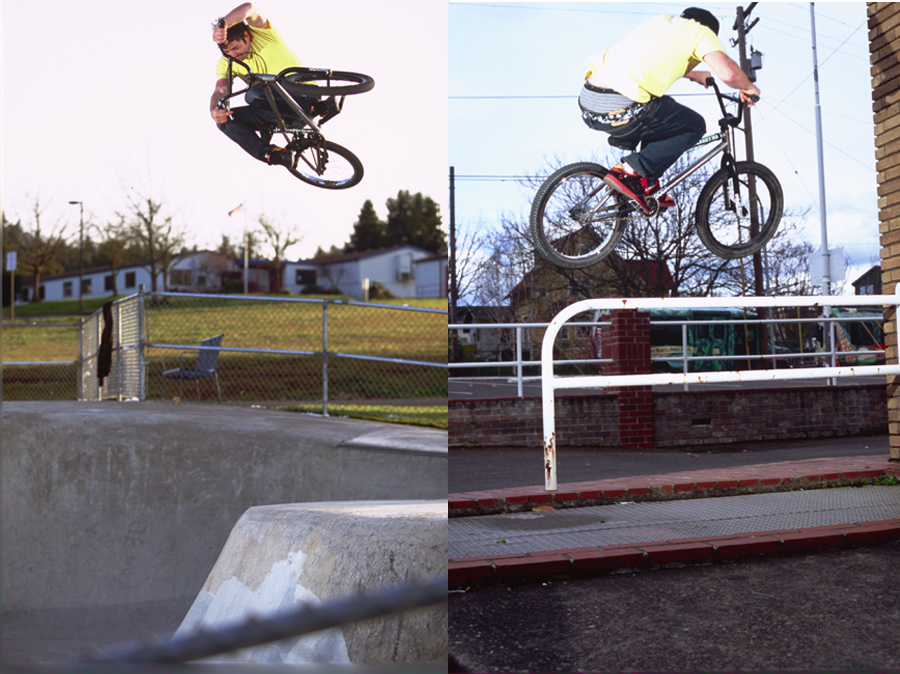 Ryan Sher may have been the longest running member on the Kink team. Ryan brought racer style with late 90’s tech onto the scene. These pictures may have been the last ones shot of Ryan on a Kink.He would leave shortly after to go and start Subrosa.
Photo: Shad Johnson

2 Responses to Lookback // The Early Years of Kink BMX