Shad and Matt Barber asked me to write something about Paul. Matt has some exclusive, vintage footage, Shad has the website, and I guess I am expected to have the words.

OK – first – it is an honour to write any sort of tribute to Paul. Brian Tunney did a nice piece for Dig that folks should check out – thanks for that Brian. Brian and others may indeed know him better than I did.

Still, the Paul that folks are writing about is alien to me. The mysterious fellow. The enigma. The myth. I think that he was those things to most people, but not all. They are not wrong – but I had a different experience.

I met Paul when I lived in Montreal and would help Hal Brindley put on Play Clothes contests. So between 1995 and 1997. Paul and some other Ontarians would attend. Paul was rad – four pegs, two brakes, detangler rad. And he rode for Kink parts way back then – so I associated him with Zack Phillips (also a sponsor of the Play contests). So I remember that well – Zack / Kink spotted him first.

Eventually, he and Steph Royer moved out to Vancouver when everybody else did – around 1997. Somewhere around then, Miron, Osato, Enns, Andrew Faris, Paul, Steph, me – lots of the most high profile guys in Canada – relocated from across the country and found themselves living in Coquitlam, BC – a suburb outside the big city. Basic Bikes, run by Cecil and Darcy, hooked up the whole crew. We were family – for real. We were all in our 20s, and riding was everything. We probably saw each other five or more days a week.

And here’s the thing – Paul may have been quieter than some, but he wasn’t a mystery. He was rad, and sociable, and a central member of the crew. That other stuff came later when he joined his Austin family at Terrible One.

I used to work for a Canadian snowboard clothing company called Rewind, which Neil Levin of Four Seasons skatepark ran in the 1990s. He let me pick a team and handle photo contingencies for the guys. I picked Pedro Dos Santos, Jason Enns, Jamie McIntosh, John Parker and Paul. Looking at some of the pre-Terrible One and Fox pictures, when he rode for Basic, I am reminded of my tallying-up of visible Rewind logos and getting cheques cut for Paul. In one of the catalogues, he is pictured with a broken wrist and a big smile.

Paul and Jason Enns were the first two that I remember to take off their front brakes and mess around with foot jam nosepicks. Paul figured out footjam tailwhips, and jumped in like it was a tailwhip air. This was new. He also switched to two-piece bars when we were all on 4- or 6-piece bars (Basic Whammy bars). It seemed so backwards – but he was on to something. I remember trying his bike and immediately contacting Hoffman Bikes and requesting some of their Jumping Bars. (Now we watch videos from the late 1990s / early 2000s and it looks so odd – like our wrists were handcuffed. 7” tall, 24” wide.)

The Terrible One Props commercial has been popping up since Paul passed. It is probably hard for the kids to understand – but that’s about 60% never-been-done stuff, and 100% rarely done better. Half-cabs on street, bunny hop tailwhips. Footjam whips, and a curved wallride that he doesn’t even make – this was so new that even this incomplete attempt elicited surprise and excitement and works as an ender. It’s rad to have been doing this so long and remembering the context of old footage. That was all next-level at the time, and obviously, so influential that these tricks are ubiquitous now. But someone had to do them first (and with style).

(I also love that he sorta blows off the pedals on the hop whip with no worries with regard to perfection.) Thinking about it now – it might be a combination of Paul and Ruben’s riding that has been the most influential (?) for what riding would become.

We need to get Jason Brown’s video Canadians III: Reprazent up on Snakebite’s YouTube channel. Around 1997 – 1998, it is basically the Paul Buchanan show. I can’t believe that they are both gone.

I’ve lost five BMXer friends / acquaintances to similar circumstances in the past 29 months. This is horseshit. I’m pissed and I’m scared. There is something going on, it seems, anecdotally, where BMXers who had this overwhelming intense relationship with the culture in their twenties (in the 1990s) are hitting their mid-life period and really struggling. And we need to help each other. And let’s be pro-active about this – not just wait for them to have the strength to reach out when they have run out of strength. We need to check in on each other. And truly and actively love each other.

I probably told Paul that I loved him the last time we spoke. So that helps me a little. I just wish that I had more chances to tell him (and Jason, and Dave, and Jim, and Clint) this again and again. 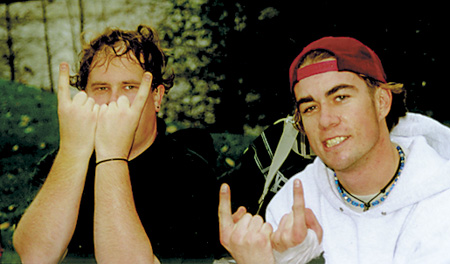 One Response to Paul Buchanan // In Memoriam