Under The Influence // Riding Opposite // Part 1 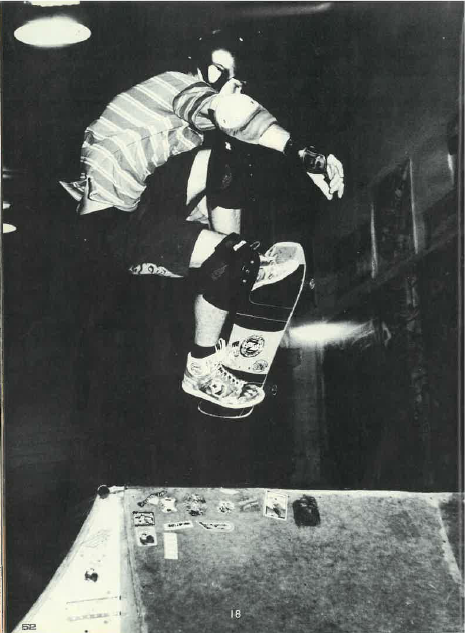 When we first started talking about doing the “Under the Influences” section, so many things popped into my mind. For me its a very open subject, because throughout my thirty plus years of bmx, I’ve had a tendency to ride and hang out with skateboarders majority of the time. In all honesty it wasn’t because I didn’t want to ride with the bmx guys in my area, but more because of the convenience aspect of it all. With hanging out with skaters came more spots to ride and also a different set of eyes to look through, every session we all seemed to feed off one another in some way. Some days, we’d listen to a Dead Kennedys tape and have fun laughing and pushing each other, and some days we’d have mellow sessions listening to Bob Marley and Peter Tosh and just carve around. Maybe we were all just young kids having fun riding whatever vessel we chose to use? Regardless the early years of riding and skating for me really molded me into who I am today, and personally I wouldn’t change that for the world.

When I first started thinking about photos to use, quite a few really came to mind. But for me there was a bit of a predicament, do I use a skate photo, or a bmx photo? Like most from my era my bible was Freestylin’, but I also had a subscription to Homeboy as well as Transworld Skateboarding. After thinking about it for a bit, I’m deciding to start with a skate photo, but before you question what the hell I’m thinking, remember there’s a part two to this and I promise it’s a bmx photo. I personally feel this skate photo influenced me because it somewhat changed my path in bmx, but also pushed my riding in a different direction than most in that back in the late 80’s (the beginning of the mid-school era). I always skated, so whenever I went to a ramp or session I usually had both my bike as well as my skateboard, therefore if I was having a bad day with one, maybe it wouldn’t be so bad with the other. Also around this time (sometime in 87) the world was blessed with the highly anticipated Powell Peralta video “The Search for Animal Chin”, which personally gave skating as well as bmx a push to build ramps and obstacles differently with a huge vert ramp with a spine and a mini ramp on the platform. This was also around the time that people started building mini ramps and then at some point in early 88 McGoo conned GT into funding his crazy parking lot ramp setup that went by the name “Stonhenge”. For those that don’t know what Stonhenge was, it was basically a set of decks and transitions that could be configured in quite a few different ways, be it hips, a jump box, as well as a few others that I know I’m forgetting. Honestly McGoo should be given the credit for developing what would eventually be the jump box which would end up at damn near every street comp over the next 10-15 years. But around this time we started building mini ramps with hips and spines which I really ended up riding a lot more. It was a lot of fun, and not near as dangerous as riding the 10ft vert ramps of this period.

So after going through and deciding which photo I was going to run with, I decided that the one photo I feel that opened my mind the most was a photo of Neil Blender doing a frontside air to fakie over a hip at the Langley Skate Ranch on the Mini Chin Ramp. I remember being on a flight to Tuscon to the AFA Masters comp and seeing this photo for the first time. At that point there really weren’t a ton of ramps that had a hip, much less any other obstacles on them. I think the thing that baffled me the most was that most people were doing backside 180’s (technically 90’s to fakie) over hips back then, just because the rotation was a little more natural and not necessarily forced as much. It really made me think about things in a different light, whereas whenever I learned a trick, why not try and learn it my opposite direction as well. Back then riders really didn’t do tricks both directions. I’m not really sure why, but I only remember seeing a handful of guys do an air their opposite direction, and if they did, it looked somewhat forced to me. Also around this time a guy named Bob that owned a bmx/skate shop decided to open a skatepark. His park had some very questionable obstacles built out of concrete, including the sketchiest 8ft bowl I’ve ever seen or ridden. It was pretty much unridable due to the way they formed the super bumpy transitions. But the “street section” of the park had a fun 4ft hip and some offset quarter pipes and what to my knowledge was one of the first actual street spines. When I finally got the confidence to do 180’s over the small hip, I decided that I should try to do it my opposite way as well, especially since a lot of my skate friends were doing transfers frontside as well as backside. After a few choice bails I actually landed one, and so my quest to learn tricks regular and opposite began here. From there it went to tail taps, disasters, nose picks, reverts as well as rock n rolls in both directions. I felt that it was somewhat pushing things in the direction that I wanted to go with my riding, especially with street comps starting to pop up all over the globe at this point, due to the huge following that street riding was developing at this point in time. Bob’s park definitely helped with my progression, especially in the mini ramp and park (street back then) department.

Over the next few years mini ramps gained popularity and riding opposite started become more commonplace in bmx. I still remember after the Standard Bykes video Style Cats came out seeing Brennan Brown at a Rampage comp and he told me the first time he saw my section he thought it sucked because I did the same tricks multiple times. Upon watching it a second time he realized that throughout that section, I would do a trick one direction and then follow it by doing the same trick but my opposite direction. I was definitely flattered considering that he couldn’t tell the difference between my regular riding direction and my opposite. Several years later Mirra took riding opposite to a whole new level on vert and started flowing a ramp back and forth doing airs and lip tricks in both direction pushing vert riding to a more flowable level. Truly it was pretty amazing to see, I never imagined it being pushed in the direction that he did, that’s for sure. Even though this was considered new in 97, the bmx world had all but forgot one of the pioneers of riding both directions, Andy Shohara. I’ll end part one here and promise not to ramble on about skating in part two with an epic photo of Andy.

This entry was posted in Articles and tagged eben krakau, neil blender, opposite, stonehenge. Bookmark the permalink.

2 Responses to Under The Influence // Riding Opposite // Part 1