Under The Influence // Riding Opposite // Part 2 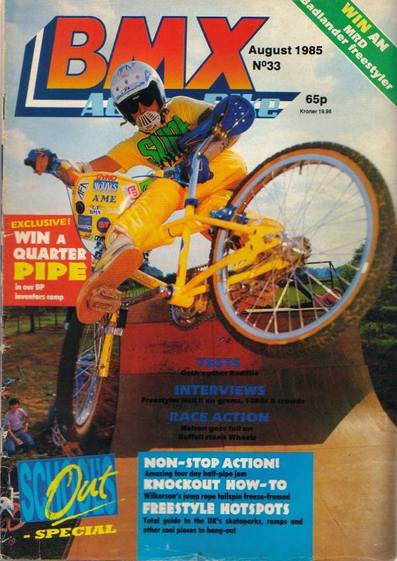 Sorry, I just realized it’s been over two months since my “Under the Influences” post. Time goes by way too quick the older I get. With that lets get started on what will be the continuation of my first post, but this one is solely about bmx and the riding of Andy Shohara. I think the first time I was made aware of Andy was in an issue of Freestylin’ in a Del Mar KOS write up where he had a photo riding the super wide no flat half pipe.

In the photo he’d be doing a relatively high air rocking a full Dyno uniform, which at the time was one of the best looking uniforms. What I didn’t realize from the photo was that Andy did airs both direction and just to add even more difficulty to it, rode regular footed both ways as well. I still to this day have seen very few that will change up their pedal stance when riding their opposite direction. Even though the Freestylin’ coverage didn’t mention that he did airs both ways, eventually a KOS video tape would make its way into my hands and I would get to see Andy’s riding for the first time out of a magazine. The contest I believe that I saw first was the KOS finals in 85 in the pipe bowl at Upland, which while carving the full pipe he would change his pedal stance between walls and even carve the opposite direction, this was beyond eye opening to my 12yr old self. Up until this point I had only really seen Dominguez and Fiola do opposite airs, but they never had the fluidity that Andy’s airs did. But back to the video that I was speaking of, it was pretty crazy seeing someone do a 7ft air out of the deep end only to return to the deep end and do an air the opposite direction at the same height. No one was doing this at that time, much less going the same height and doing variations both directions as well. Pretty crazy thinking that this was over thirty years ago. His riding definitely stood out to me over most of the well know amateur riders of that time for sure, and personally I don’t really feel that his riding was truly judged in those contests fairly, but then again that’s just my opinion. I still remember seeing his run for the first time like it was yesterday, he rode to Saxon and was riding what I would definitely say would be a dream sponsor of Shad and myself which was T&C surf designs, if you don’t know what T&C is/was, they were an awesome surf company/shop based out of Hawaii and they had some of the most iconic cartoon emblazed artwork on their clothing and decals, as well as two Nintendo NES games. But this story isn’t about T&C its about Andy and the way he chose to travel a path that really hadn’t been traveled much up until he came along. His runs were pretty awesome and seeing him do a one footer one direction then only to return to the wall and do a one hander one footer the opposite direction, was truly amazing. My mind was truly blown and I know the next time I rode my friends quarterpipe I decided to try and air my opposite direction.

I believe right around the time I started seeing Andy get coverage at skatepark contests, most of the skatepark comps started going away and I believe he moved to England around this point. It was definitely a bummer not being able to see photos of him riding for a few years, but in March of 88, much to my surprise, he showed up at the Portland AFA Masters comp. I was beyond stoked to see that he was still doing airs both ways and from what I remember he was actually trying 540’s both ways as well. Another thing that I know shocked quite a few people was the fact that he was wearing a FlyAway skate helmet instead of the typical Bell Pro Plus helmet that most were riding with at that time. Needless to say he did some pretty impressive stuff at that contest that left me hoping to see more of his riding. He had a few photos through the middle of the year in different bmx publications, but then when the 2-hip video came out the following year he had some footage in it. It was pretty refreshing to see him riding a halfpipe the way most skateboarders were back then, basically airing one way only to follow up with an air in the opposite direction. It was beyond cool. But just as soon as he arrived, he disappeared again only to leave my teenage mind wondering what it would be like to ride both directions so effortlessly.
Fast forward to around 96 and the rumors of Mirra riding both directions started popping up. I think the first contest of the 97 Dave was doing lip tricks both ways and carving a few airs his opposite direction. Then a year or so later doing a huge amount of his tricks regular and opposite. It was quite refreshing to see a 48ft wide halfpipe being ridden the way it should’ve been ridden all along, carving back and forth doing airs and lip tricks in a more flowing manor. I remember sitting on top of the vert ramp listening to quite a few pros complaining that they were going to have to learn to do airs in their opposite direction as well as a lip trick here or there. Over the next few years opposite (switch) riding would become more common not only in vert, but park and street as well.

Over the past decade or so, random photos of Andy would pop up on random websites, which made me beyond stoked. I thought like quite a few guys from his era that he had quit riding, but I was definitely wrong. It was definitely cool to know that he was still killing it on a bmx bike and even doing some pretty high airs on the mega ramp quarter. I’m not really sure that Andy realizes the influence that he has had not only on my riding, but modern day riding as well. Even though he may not have been the first to air or do a trick his opposite direction, he was definitely the first one to really push the envelope by riding both ways and make it look quite natural in a world where most opposite airs looked exactly like their namesake, opposite. With that being said, I solute you Andy, you pioneered a different style of riding decades before many others would look at riding the same way that you did.

This entry was posted in Stories, Uncategorized, Video and tagged 1985, Andy Shohara, eben krakau, pipeline, portland, under the influence. Bookmark the permalink.