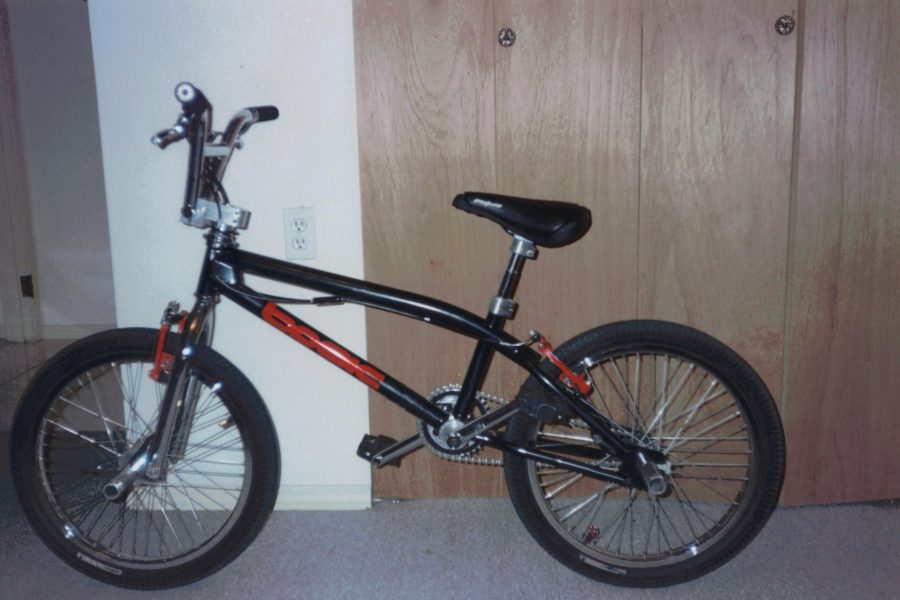 I recently came across this picture of one of my bikes from 1997.
I had been riding a trans-green over chrome Hoffman Bikes Condor (that I got direct from Steve Swope) for three years, and then had briefly switched to my originally-red 1996 P.K. Ripper before Cecil Milligan at Basic offered to make me a custom frame.

I asked for his new Sluggo frame to be built with custom features – specifically, I wanted to try the then-new V-brakes from Shimano (and I wanted these mounts to be on the top of the seat stays), I needed a coaster brake bracket, and I wanted it painted metallic green. He had it made, and sent it to me, gratis, early in 1997.
I set the frame up and took it to the Boucherville skatepark in Montreal. Twenty minutes into the inaugural ride, one of the canti-studs broke off. So it got sent back to be stripped, re-welded, and re-powdered (this time galactic black – black with a rainbow of sparkles).

This “fine-tuned” version worked just fine until I sold it to Jeff from Abbotsford in 1998 after Basic had tanked and Woody Itson let me have a Dyno frame that he had given to Joey Spinoza for X Games but then ….

I love looking at the picture of this set-up. Lots of fun memories, and it is probably the bike that I peaked on, skill-wise (which I would place at the summer of 1997).

In addition to the custom frame, Chris Moeller had agreed to make me custom forks. These are Menstrual Cycles forks with cantilever studs for the V-brakes, but with a Redneck stem instead of the Menstrual stem.

The red Shimano DX brakes were sent to me by a Shimano rep that I met at Interbike in 1996. He sent me two sets of brakes and levers, and as I had convinced him that I was interested in trying to ride freestyle in clips, he sent me their new DX clip pedals and a pair of their shoes. I never did try them.

I did not use the DX levers on that bike. To get the V-brakes to work with the SST Oryg, I had to use these cammed wheels (“Travel Agent”?) to convert the V-brake from long-pull to regular canti-pull. As such, I got to use my favourite BMX levers (that I had forgotten about for almost 20 years until recently): the Dia Compe MX88s. I wish that the retro guys knew about these and would demand re-issues, but as they were an early 1990s product, no one seems to know about them.

I sent this picture to Darcy Saccucci yesterday, and he called out the MKS graphite pedals and all the VG stuff. I still have those pedals – they are on my new 2016 Haro Master flatland bike – but all the VG stuff has disappeared.
I absolutely loved the VG stuff. The first time I saw the VG seat guts was at Ron Wilkerson’s house in San Francisco in 1993 on the way to the Moreno Valley BS contest. We were put up for a night on the way from Vancouver thanks to Ron’s roommate, Geoff Cain. Geoff showed us a box of sample parts that Ron had been sent, and I don’t know if I ever was so blown away by a BMX product – at least until MacNeil’s Jamie McIntosh showed me the Pivotal system for the first time, appropriately.

Our vanload of riders hit the VG warehouse on the way back from that contest and picked up a bunch of stuff. I remember that the owner was not impressed that I asked to have my VG grind disc bored out for my one-piece crank.
Anyway – there are VG bar-ends, VG seat guts, a VG seat clamp, and maybe a set of their Spurs chain tensioners. It is odd to me that all this stuff is silver, as I loved that their stuff came in purple anodized.
Those are Basic Whammy Bars. I think the first version – the ones that we had to trade back in for the next batch after Pat Miller destroyed a pair and his legs (puncture wounds) at the second X Games in Rhode Island. Mine ended up going to flatlander Stephane Royer.

Primo Hemorrhoid seat and V-Monster tires were the choice of pretty much everybody for about five years. Two of the greatest products of all time, to be sure. I would have been sent these by La Luang (later co-owner of Volume and Demolition).

I think that those are aluminum Indy Industry pegs that Bill Nitschke sent me a few years earlier. I know that Dave Osato eventually made me take them off because the aluminum was making the coping at the Ten Pack warehouse ramps slower. He gifted me leftover Basic Silencer pegs as replacements.

I see that I had installed the Odyssey 34t sprocket backwards, which was a dick move, as I was sent a box of Odyssey parts by (I think?) Terry Tennette. Rad that I was running 34/12 gearing about five years early, though.
Parts that I actually paid for: Profile cranks and Peregrine Super-Pro rims. Maybe the grips, probably the levers. The front hub was a 14mm Hoffman Gack that I got in a trade from Pedro Dos Santos for my car / bike rack. The rear hub was a Suntour coaster brake with a 12t Kore chromoly sprocket handed to me by Bob Morales.

Finally, the valve caps – a gold anodized front and a purple dice rear – I have had these on my main bike since 1990.
I’m pretty sure that this bike was 34lbs (my Condor was 37). Dave and Jay’s Schwinns were about 45lbs at the time, so this was the lightest bike around Coquitlam.

*My current main ride, a MacNeil Loden, weighs 21lbs even.